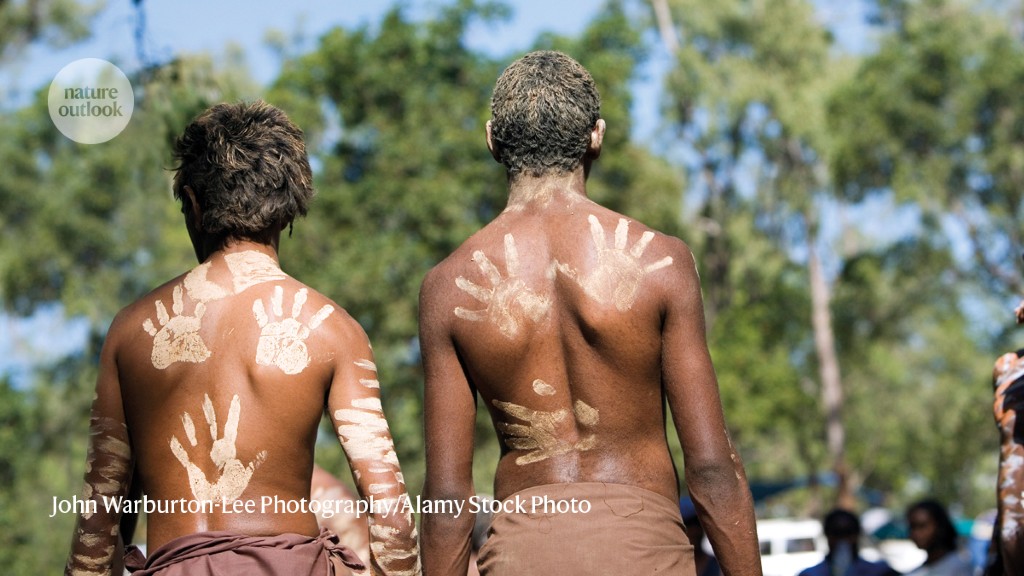 In the late 1960s, US physician Baruch Blumberg discovered a hitherto unknown protein in the blood of an Australian Aboriginal person. Not knowing what the protein was, he dubbed it the ‘Australia antigen’. Later research linked the antigen to hepatitis B when it was found to be circulating in the blood of a person infected with the virus. The antigen’s discovery was the first major boost in the fight against hepatitis B, because it allowed scientists to track the disease.

More than fifty years later, however, hepatitis B remains a stubborn problem for Aboriginal communities. The disease is four times more common in Australia’s Indigenous people than in the rest of the country’s population. There is also evidence that complications of the disease, such as cirrhosis and liver cancer, develop more rapidly1. Australia is not an anomaly: epidemiologists have found similar patterns of disease in Indigenous groups in the Amazon, North America, New Zealand and Taiwan.

Several factors, including social concerns and the challenges of geography, conspire to increase hepatitis B’s prevalence in Aboriginal people. But biology might also have a role.

Cracking the problem is a complex endeavour, but the more researchers focus on how and why this disease behaves differently in Indigenous populations, the more likely it is that treatment and control can be improved.

The inaccessibility of the Australian bush could be part of the reason for the higher incidence of hepatitis B in Aboriginal individuals. According to the Australian Bureau of Statistics, 14% of Indigenous people live in areas classified as ‘very remote’, compared with only 0.5% of non-Indigenous people. Living in such isolated places takes a heavy toll on health (see ‘The health cost of outback living’), knocking 15 years off the median age at death for women and 11 years for men, compared with people living in the cities (see go.nature.com/3hyrcus).

A 2019 study warned that shortages of health-care workers and declining access to primary health care are exacerbated by increasing remoteness2. As a result, Aboriginal populations in remote areas have fewer opportunities to get tested for hepatitis B virus (HBV) and other pathogens.

There are few data available on disparities in testing according to ethnicity or geographical area, partly owing to the difficulty of conducting studies in remote areas. But testing could be improved throughout Australia, according to Megan Campbell, a medical adviser at the National Aboriginal Community Controlled Health Organisation in Sydney. “There is no nationally consistent approach to testing for HBV,” Campbell says.

Ashleigh Qama, an epidemiologist at the Doherty Institute in Melbourne, Australia, who has studied hepatitis B infections in Indigenous populations, agrees. “About a third of people don’t know they are infected with the virus,” she says. “That makes it hard to control the disease.”

Testing isn’t the only way in which remote locations play a part. Nicholas Biddle, an economist at the Australian National University in Canberra, and his colleague Francis Markham looked at data from the previous three censuses to assess geographical variations in income, poverty and inequality. Their results3, published in 2018, paint a picture of two halves: prosperity in the cities and their surrounds, contrasted by stagnation and decline in remote areas. These factors are undeniably linked to health outcomes, Biddle says, but they still don’t explain all of the problem.

“If every Indigenous person moved to Sydney, the differences in Hep B and the general health gap would still be there,” says Biddle. “But the gap is certainly wider in remote areas.”

A question of viral genetics

Hepatitis B is an ancient disease, and so the virus has had plenty of time to mutate into genetically distinct strains. “Different genotypes are associated with different clinical outcomes, and the efficacy of treatments and vaccines can vary, too,” says Eileen Roulis, a molecular microbiologist at the Australian Red Cross Lifeblood research team in Brisbane who studies the genetic diversity of the disease.

One hepatitis B virus subtype, known as HBV-C4, has been in the Aboriginal population since people first arrived in Australia from Southeast Asia more than 50,000 years ago.

The HBV-C4 variant has only ever been detected in Aboriginal people. And although it is theoretically possible that other strains are also present in Indigenous communities, researchers haven’t yet detected any. Margaret Littlejohn, a medical researcher at the Doherty Institute, has genotyped hundreds of hepatitis B samples from Aboriginal people over the past decade or so — and every one of them has been HBV-C4. “Why are hepatitis rates high in Indigenous people?” she asks. “It could be the genotype is playing a big role.”

In a 2019 study, Littlejohn and her team monitored 193 Indigenous people with the HBV-C4 subtype for around 38 months1. They found that 13% of the participants developed cirrhosis, a scarring of the liver tissue, during that time. This is more than two and a half times the rate observed in studies following populations that have other subtypes. That led Littlejohn to conclude that HBV-C4 is an especially hard-hitting strain. Her study didn’t control for variations in socio-economic status, however, so other factors might also have influenced her results.

Qama agrees. “It’s a much more aggressive variant,” she says.

One way to explain its tenacity is that HBV-C4 might have developed mutations to allow it to replicate more rapidly, says Roulis. “HBV-C4 tends to produce higher viral loads, which is associated with a higher risk of developing cirrhosis and liver cancer,” she says.

Australia introduced universal infant vaccination for hepatitis B in 2000. The vaccination rate of Indigenous people is now extremely high, estimated to be 97% in 2016, which closely resembles rates in non-Indigenous people. Yet the problem endures.

The vaccine was specifically designed for the HBV-A genotype, which is common in Europe and parts of Africa. It is still an effective way to prevent HBV-C4 infection, but evidence is emerging that its protection is suboptimal compared with protection against other genotypes. In a 2020 study, Qama and her colleagues analysed the results of more than 200,000 blood tests carried out between 1991 and 2011 in Australia’s Northern Territory4. Hepatitis B core antibodies, which develop with the onset of symptoms, were found in only 3.1% of study participants who had been vaccinated. But an overwhelming 86.4% of that group were Indigenous people.

“The vaccine is still very efficacious, but perhaps not as good as it could be,” says Littlejohn.

Further research aimed at better understanding HBV-C4 and its epidemiology could yield new ways to curtail its incidence; for example, a booster dose of the vaccine might help. “We’re working to understand HBV-C4 better,” says Littlejohn. “The more we know, the better.”

If scientists knew how HBV-C4 manages to circumvent the vaccine, they might be able to tweak the formulation, tailoring it more closely to that strain. Regular, standardized testing would also help public-health experts to get a better handle on how the variant is spreading in Indigenous populations, helping to modify prevention strategies and focus resources.

There is a second school of thought, however, that focuses more on improving the socio-economic and overall health of Aboriginal people. Such gains would presumably have a beneficial knock-on effect on hepatitis B in these communities.

After all, higher rates of the disease form part of a wider trend in Australia, known as the ‘health gap’, that exists between Indigenous and non-Indigenous people. “It may sound political for me to attribute the health gap to the historical discrimination that Indigenous people in Australia have experienced without empirical data,” says Yonatan Dinku, an economist at the Australian National University whose research focuses on Indigenous well-being. “But you can’t ignore it, because it’s driving a lot of the underlying causes.”

According to data compiled by the Australian Institute of Health and Welfare (AIHW), a government agency, just 28% of Indigenous adults are said to be in good health, compared with 54% of non-Indigenous adults (see go.nature.com/3kdxkji). Aboriginal people in Australia also have lower life expectancies and higher rates of preventable disease, and are more likely to be hospitalized, than non-Aboriginal people. “We have to consider that there is a socio-economic factor to all this,” says Qama.

The most common mode of infection is the exchange of blood from mother to baby during birth. Aboriginal women are six times more likely to be teenage mothers than are women in the rest of the Australian population — a discrepancy that could be contributing to the virus’s transmission, because teenage girls are less likely than older women to seek out antenatal services such as hepatitis B screening. Teenage mothers, who disproportionately give birth at home, can also miss out on hepatitis B vaccinations for their infants. “Vaccination should ideally happen within hours of birth, otherwise the chance of infection is high,” Littlejohn says.

Several studies have highlighted the importance of other social disadvantages in explaining the health gap. The AIHW’s own analysis looked at people’s self-assessments of their health, and found that social determinants, such as education and employment status, account for one-third of the health gap. The most important social factor was household income: it alone explains 14% of the gap. Furthermore, Aboriginal households are, on average, 27% larger than the typical Australian household, increasing the number of people at risk of catching an infectious disease such as hepatitis B, says Qama.

In the end, however, it’s not really a matter of choosing between a generalist or a specialist approach to the problem. A two-pronged solution is more likely to yield results.