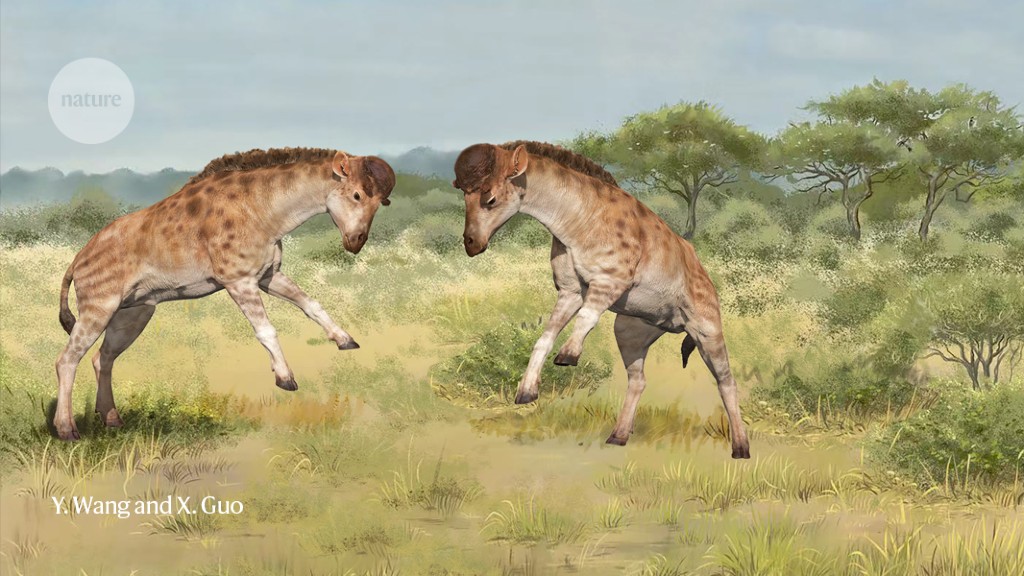 How did the giraffe get its long neck? Researchers say a species of giraffoid that lived millions of years ago in China could shed light on this puzzler. The animal, named after a mythical unicorn-like creature, had a thick headpiece optimized for high-speed head-bashing fights1.

The giraffe’s neck has intrigued researchers for decades. There should be a good reason for the extraordinary length, because it causes hardship. A giraffe’s heart needs to pump blood 2 metres up to the head, which requires a high blood pressure and management to avoid fainting or stroke. “It’s beautifully adapted to this, but it’s a big cost,” says Rob Simmons, a behavioural ecologist at the University of Cape Town in South Africa, who was not involved in the study.

One prevailing theory is that giraffes evolved longer necks to reach higher trees for food. “This is widely believed; it’s really entrenched,” says Simmons. This makes sense, but isn’t as simple as it sounds — research has shown that giraffes tend to eat from lower levels2, and tall giraffes aren’t more likely to survive drought3, when food competition is highest. Another idea is that giraffes evolved longer necks for sexual competition, with male giraffes engaging in violent neck-swinging fights and longer necks attracting mates. This “necks for sex” theory is sometimes contested by the fact that males don’t have longer necks than females4. “It been very difficult for the traditional giraffe researchers to accept this sexual selection idea,” says Simmons.

The ancient giraffoid’s fossilized remains, described on 2 June in Science1, add some more data to the debate.

Co-author Jin Meng first stumbled on a skull with four vertebrae lying on the sands of the Junggar Basin in northern China, back in 1996. “He cried: ‘A strange beast!’,” says Shi-Qi Wang, a palaeontologist at the Chinese Academy of Sciences Institute of Vertebrate Paleontology and Paleoanthropology in Beijing. Over two decades, Meng and colleagues found more than 77 fossils of the same species, including another 2 skulls and some teeth.

They describe the specimen as a previously unknown giraffe relative that lived in the Miocene, about 16.9 million years ago. It probably looked more like the short-necked African Okapi (Okapia johnstoni) than a giraffe, and had a 5-cm thick hard structure on the top of its head made of layers of keratin. They named it Discokeryx xiezhi after the xiezhi, a unicorn-like creature in Chinese mythology. “This legend might derive from some fossil giraffoids,” speculates Wang. The animal’s complex head and neck bone structure shows that it was “exquisitely adapted for power and strength to aid male–male combat,” says Simmons, to compete for and impress potential mates.

The new giraffoid fits into a family tree with a plethora of species that had strange headgear. Wang and colleagues map out more than a dozen types of helmets and horns in giraffoids and their close relatives.

Wang thinks that as ancestral giraffoids left the forest and entered grasslands, they fought ever-more fiercely with their necks, which grew longer as their fighting style evolved. But high foraging probably also had a role, he says.

Paleoungulate biologist Nikos Solounias at the New York Institute of Technology College of Osteopathic Medicine in Old Westbury is not convinced that the newly described headbutting ruminant is a particularly close relative of modern giraffes or can tell us much about their necks. “All ruminants fight with their horns and neck,” he says. “Giraffes fight differently; they have a different evolutionary history.” But Simmons argues that the work shows sexual selection having a strong role in the neck shape of an ancestral giraffoid, which opens the door for it to be “equally likely” for modern giraffes. “This paper is going to open people’s eyes that we should take this sexual selection theory seriously,” says Simmons.