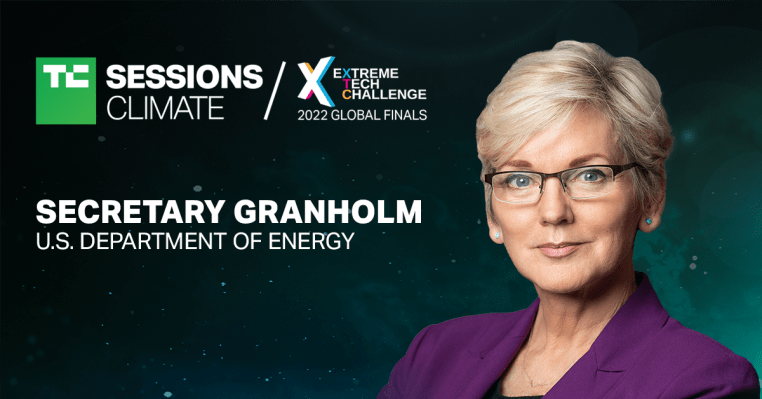 It’s hard to believe that, despite a scientific consensus and mountains of verified evidence, climate change has become a global political football. And yet here we are.

All the innovative climate tech in the world — both current and emerging — is not enough to turn the rising climate-crisis tide without one key ingredient: political will. Yet, the increasingly gridlocked nature of U.S. politics is holding back progress on emissions mitigation. It begs the question: How can we, as a nation, meaningfully move forward here at home — much less influence other major carbon polluters across the globe?

This vital question is just one reason why we’re excited to announce that the Secretary of the U.S. Department of Energy (DOE) Jennifer Granholm will join us on June 16 for our Online Day at TC Sessions: Climate & The Extreme Tech Challenge 2022 Global Finals.

Granholm leads the DOE’s effort to help achieve President Biden’s goal of net-zero carbon emissions by 2050, which would, Granholm said in the Secretary’s Message to America, mean “cheap, abundant, clean power — made right here in the U.S.”

It’s unlikely that Granholm, or any of our current politicians, will be in office come 2050. But, given the likelihood of yet another contentious presidential election in 2024, we’re curious about what concrete measures Granholm plans to take over the next two — or possibly six — years to move us closer to that distant goal.

These are just some of the topics we’ll discuss with Granholm, who became the second woman to lead the DOE on February 25, 2021. She was also the first woman elected Governor of Michigan, serving two terms from 2003 to 2011.

After serving as governor, Granholm joined the faculty of the University of California, Berkeley as a Distinguished Professor of Practice in the Goldman School of Public Policy, focusing on the intersection of law, clean energy, manufacturing, policy and industry. She also served as an advisor to the Clean Energy Program of the Pew Charitable Trusts.

Don’t miss this online fireside chat and the opportunity to hear directly from the Secretary of the U.S. Department of Energy, Jennifer Granholm, about the ongoing efforts to move the U.S closer to net-zero carbon emissions.

TC Sessions: Climate takes place in person on June 14 at UC Berkley’s Zellerbach Hall, and this fireside chat takes place during our online day on June 16. Buy your ticket today.