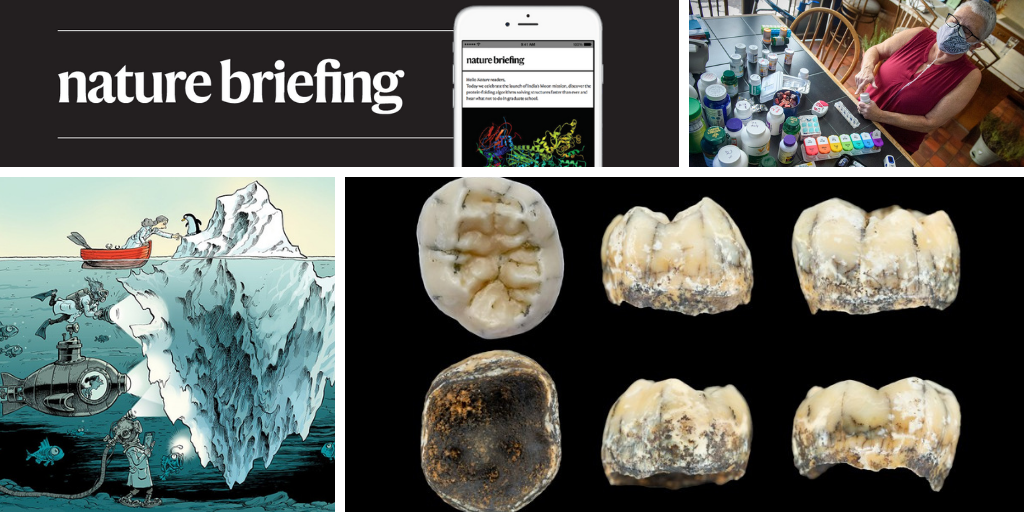 A fossilized tooth unearthed in a cave in northern Laos might have belonged to a young Denisovan girl who died between 164,000 and 131,000 years ago. If confirmed, it would be the first fossil evidence that Denisovans — an extinct hominin species that co-existed with Neanderthals and modern humans — lived in southeast Asia. The molar would be only the second Denisovan fossil found outside Siberia, but millions of people with Asian, Oceanian or Pacific Islander ancestry carry traces of Denisovan DNA.

In India and Pakistan, climate change has made record-breaking heatwaves 100 times more likely to happen, according to an analysis by the UK Met Office. The modelling study assessed the heatwave that gripped the region in April and May 2010 to determine how climate change has affected the probability of these events and found that, by the end of the century, India and Pakistan could face extreme temperatures every year. Pre-monsoon heatwaves in recent weeks have seen temperatures reach as high as 51 ℃ in Pakistan, and the heat looks set to worsen later this week.

Videos uploaded to YouTube have given fresh insight into how Asian elephants (Elephas maximus) respond to death. Researchers used the videos to describe, sometimes for the first time, behaviours that had been known only anecdotally. These included what seems to be keeping vigil over the body of a peer, trumpeting or roaring, and females carrying deceased calves. “These rare and extremely important natural-history observations suggest that an awareness of loss is present in elephants,” says elephant researcher Phyllis Lee.

Restricting analyses to a single technique can blind researchers to an important aspect of uncertainty, making results seem more precise than they really are. For example, in 2020, the UK Scientific Pandemic Influenza Group on Modelling asked nine teams to calculate the reproduction number R for COVID-19 infections. The uncertainty across all the teams was considerably larger than the uncertainty within any one team — important knowledge for decision-makers. Meta-science researcher Balazs Aczel and statisticians Eric-Jan Wagenmakers and Alexandra Sarafoglou argue that data should be subject to multiple analyses, ideally by multiple teams — and that the extra work is worth it.

COVID-19 has killed an estimated 15 million people since it emerged at the end of 2019, but its impact on health reaches much further, from the acute effects of the illness to the lasting symptoms known as long COVID. Working out the size of that health burden is challenging, but important — governments use such figures to plan how to spend health-care budgets. So researchers are starting to tally the overall health impacts and trying to draw lessons from any patterns.

Last week, North Korean state media confirmed, for the first time, that the country has cases of COVID-19. No one there is known to be vaccinated, and the nation is already in the grip of widespread food insecurity. The international community must be prepared to offer unconditional help to save lives, argues nuclear-policy analyst Ankit Panda — even if North Korea insists on continuing its missile testing. “Quite simply, if North Korea tests its seventh nuclear device at 9 a.m. on a given day and requests pandemic-related assistance at 9:30 a.m., there should be no hesitation in responding positively — even as the nuclear testing should be condemned,” writes Panda.

Mathematician Julia Robinson had been pursuing the solution to a quandary known as Hilbert’s tenth problem for her whole career when 22-year-old Yuri Matiyasevich found it. Her generous letter sparked a life-long epistolary friendship. (Celebratio Mathematica | 35 min read)