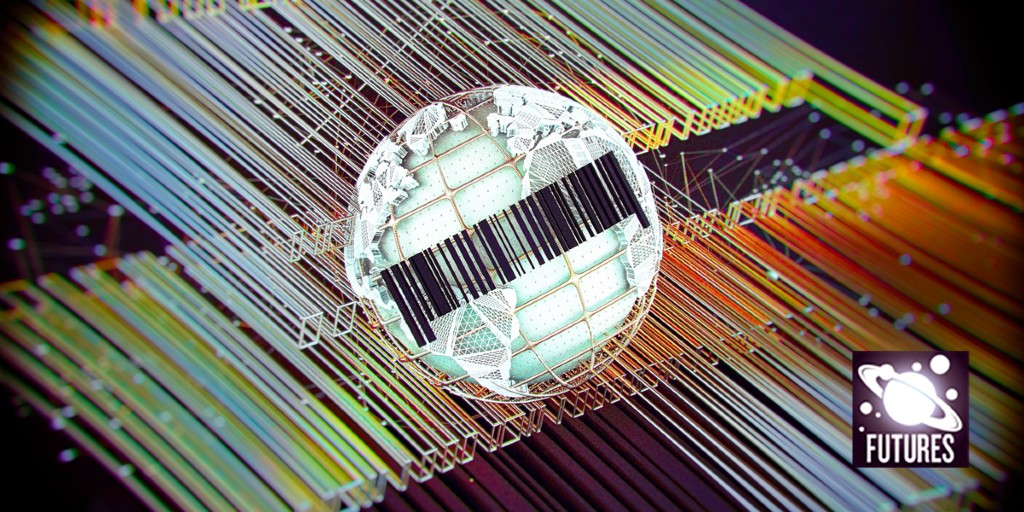 The shore, lovely and deserted as it was, was marred by something Faye couldn’t quite make out, at least not on the sand itself. But a quick scan of the water, and there — she locked in — bobbing in the breakers was a soda bottle.

Now and then trash washed in after a storm. She sent the dog out.

Without taking the bottle from Biondo’s jaw, Faye aimed her phone’s camera at one of the hundreds of barcodes covering the bottle. She pressed ‘SUBMIT’ and walked on.

Biondo sprang back into the froth and returned the garbage to the sea.

In her shopping trolley, Faye had the ingredients for dinner and tomorrow’s breakfast and lunch. She made a mental note of every item and where it fitted into each meal, even though she knew everything was exactly correct, as usual.

With self-conscious efficiency, she placed her groceries on the conveyor. Faye figured the clerk appreciated her technique. Lost in a daydream — the ones about winning awards were not uncommon — Faye was startled by an alarm.

“We’re going to rescan this one, Ms Dunham,” assured the clerk, holding up a jar of pesto. “I’m sure it’s —” The alarm went off again, and one more time when the clerk scanned a pack of sliced provolone.

“There must be a mistake,” Faye reasoned to the clerk, noting the other customers eyeing her. “I always put my garbage in the Silos.”

“The System doesn’t make mistakes twice, Ms Dunham,” the clerk said. He reorganized her groceries, pulling all the packaged items off the conveyor and stashing them in a bin at his feet. Only the sweet potato and bananas remained. “You can still buy these.”

The town was dotted with Silos, each protruding from the earth in areas of heavy foot traffic, mostly near schools and parks. The avocado-green tubes had sprung up like weeds before anyone knew what to think. That’s how each new Solution materialized from the Sustainability Accelerator.

The library’s Silo, where Faye now waited, was a Touch Base. She regretted not signing up for text alerts. She had figured the system would clutter up her life, tracking each bit of trash like it did. Besides, Faye never littered. But by now — even if it was their mistake — she had missed however many non-compliance warnings, couldn’t buy groceries and was looking at a crushing fine.

“May we help you pay your penalty?” The panel had come alive as soon as Faye stepped close. She leant towards the screen, “Actually, I think there has been a mis—”

The alarm reminded her of the grocery store. “Press PENALTY to comply,” the voice repeated itself between alarms. Passers-by had stopped to stare. Faye’s nervous fingers found an icon that looked like a wilted, brown leaf: CANCEL COMPLY.

Faye had planned to make toasted panini and get back to drafting. Instead, she peeled a banana and logged into the System. WELCOME BACK, IT’S BEEN A WHILE! appeared in a friendly font, just above a flashing PENALTY.

There was nowhere to go. Faye looked for a chat icon, a ‘Message Us’ form — even a phone number would have worked. But the Sustainability Accelerator had pulled up its drawbridge. Every click diverted her back to PENALTY.

Her kitchen closed in. The only thing that seemed to get bigger and brighter was the sweet potato, all alone there on the counter. Faye knew she had lost. She knew, too, that the sooner she submitted, the less of a defeat it would be.

Paying the fine took Faye less than 15 seconds. But doing so had unlocked the Drainage for the first time. Seeing a dynamic map of all her trash had been like reconnecting with a high-school acquaintance. She suddenly, unwittingly, wanted to know everything.

Faye followed hundreds of pieces of her trash as they passed through the Drainage — blinking icons sliding past underground checkpoints and into sorting stations, holding patterns and, lastly, the Sink. She was captivated by the paper garbage. It tended to break into pieces, dividing into identical twin icons that each tracked back to Faye thanks to near-perfect barcode coverage.

Using The Drainage’s look-back mode, Faye scrolled through the past week, watching as items migrated out of stores and into her home and Silos, and even the moment one of her barcodes became another person’s responsibility, when she gave Donna Calisto’s baby a chewable book.

Faye, weirdly drained, stood up from the table and drifted towards the window. Outside, the live oak stood sentry like always, its mess of curving branches reminiscent of the world from which she had just logged out.

The beach glowed with pre-storm light. Faye squinted out over the sand. The Penalty had said that Faye’s litter — actually, it wasn’t trash but Biondo’s second-favourite ball — was reported along this stretch of beach. She figured it was still there. People tended to report trash without picking it up, lest the barcode became their responsibility.

Biondo spotted the ball first. As he bounded ahead, Faye’s phone buzzed with an alert from the Sustainability Accelerator. The plastic packaging from her new ‘Dog Ball Safety Net’ had cleared its Silo checkpoint. Another piece of trash, out of her hands.

Biondo returned with the ball in his jaws. Faye attached the Safety Net to his collar and secured the ball inside. She wasn’t going to make the same mistake twice.

The idea for this story popped up while I was walking home, after dropping my son off at practice. My thoughts were on a package my parents had sent from overseas. A text alert said it was departing on its third trip across the Atlantic Ocean. A week earlier I had watched it travel in and out of Chicago four times.

Dodging overfilled dumpsters, I wondered …what if we tracked pieces of garbage? I imagined several futures but ultimately wanted the world in the story to feel like a familiar, beautiful trap.

As for the package, within a few weeks it was declared lost by the postal systems of both countries. The tracking number had vanished. We accepted the loss and moved on. Then one afternoon it appeared, perfectly under the radar, at our door.