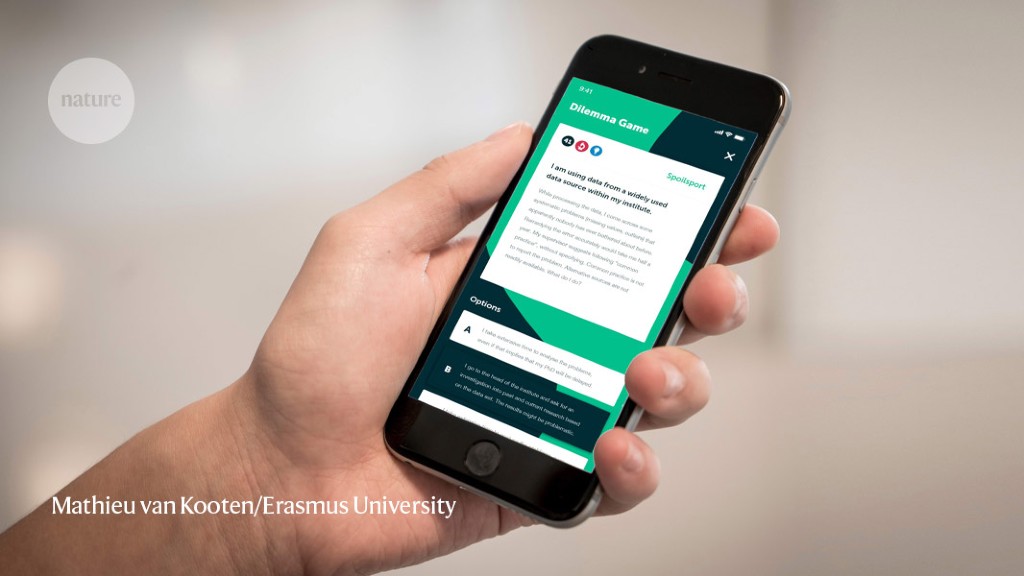 An app that makes a game out of resolving research-integrity dilemmas has been downloaded by thousands of people since its launch in 2020. The project, presented at the World Conference on Research Integrity in Cape Town, South Africa, last week, is designed to get researchers talking about issues they might previously have had to grapple with alone.

More than 12,000 people have used the Dilemma Game app over the past 6 months, and researchers in Belgium, Nigeria, Italy, Estonia, Czech Republic, India, Denmark and Turkey are among its top users.

Nature spoke to Nick den Hollander, a senior policy officer at Erasmus University Rotterdam in the Netherlands, where the game was developed.

Can you tell me a bit about the Dilemma Game and how it works?

The app presents different scenarios for people to think and talk about. These dilemmas are written from the perspective of a PhD student, lecturer or journal editor. They give you some kind of context on the issue that is at stake. An example is: “I’m a PhD candidate, I have sent in my article to a high-standing journal and it has been rejected. But now my supervisor can help me, because they know somebody who is on the editorial committee. If I add them to the paper as an author I can get it published. What should I do?”

You get four options. Option one might be: “I should reject this offer and file a complaint to the ethical committee, because my supervisor is trying to commit fraud.” Another could be: “I should add his name — it’s not that bad if the content of the paper is still the same, and sometimes you have to accept a bit of help.” And there will be two other options. Once you choose an answer, you can see how other players voted and whether you’re an outlier or whether you fall in with most other people. The main purpose of the game is to get a discussion going.

So what’s the answer to that dilemma?

There isn’t a right answer. But the app does sometimes say which would probably come closest to the guidance in the Netherlands Code of Conduct for Research Integrity. Once you’ve given your answer, you can read an expert review written by Erasmus University’s dean of philosophy giving you different perspectives on each answer. The aim is to try to make you think about why you chose a particular answer.

Where did you get the idea from?

It’s based on a physical card game that my colleagues had developed. We did a survey in 2019, after a new code of conduct came out, and it was clear that by changing the card game into an app we could make it more accessible for people. The code of conduct describes 5 core values for research integrity and gives an overview of 61 ‘norms’, which describe the correct behaviour. The idea behind this is that it’s helpful for committees that have to decide whether somebody has done something wrong to see what the norm says. There’s a lot of debate about the norms — We tried to implement this discussion with the app.

How many dilemmas are there?

So far, there are more than 100, and on the first Monday of every month we add a new one. I’ve written most of them on the basis of questions that users submit. I recently had one from a supervisor saying, “I just started a project with a new PhD candidate, and I asked her to write a review. And she came up with all kinds of literature that is not real literature, but fake things and alternative options. What should I do?” I hope that it really connects with what people are actually dealing with.

Do you have any plans to do research on people’s responses in the app?

It would be really interesting to see how people from different career stages or disciplinary backgrounds answer the dilemmas, but it’s difficult because privacy regulations are very strict. We can only see how many people downloaded the app and what countries they are in. In the next year, we are going to try to expand the app to include other types of integrity issue, such as harassment. We might also look at how we can collect more information.