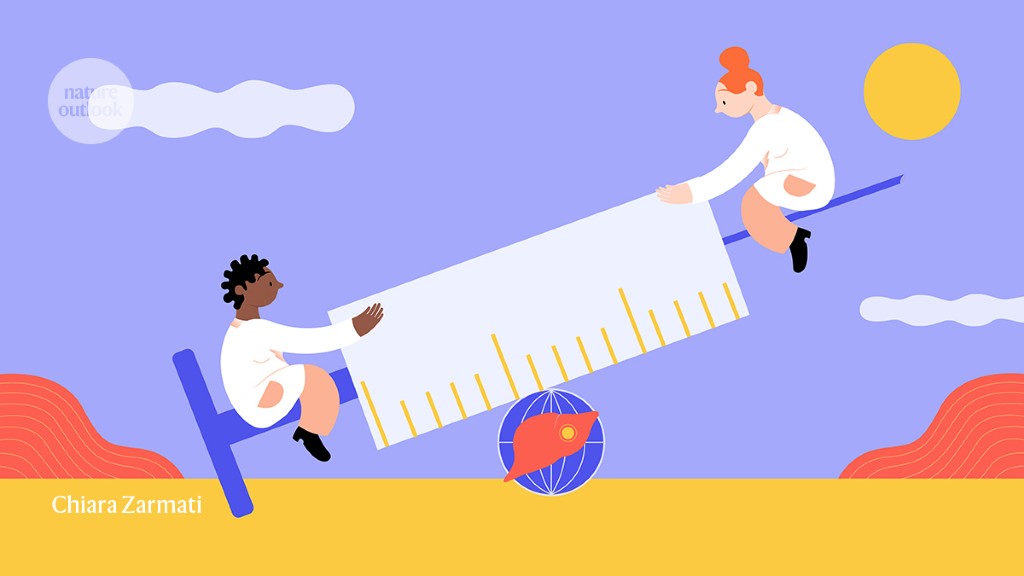 Between 2016 and 2018, researchers collected blood samples from more than 6,000 people in Ndirande, a low-income neighbourhood near the city of Blantyre in central Malawi. The researchers’ goal was to assess the impact of a hepatitis B vaccination programme 15 years after its implementation, and their analyses offered some good news. The disease was present in fewer than 0.5% of children born after the vaccine became available, and 97% of children had been vaccinated1.

Those findings echo hepatitis B vaccination success stories elsewhere, including in China, where the proportion of newborns vaccinated at birth in many areas rose from 64% to more than 90% after the country began making vaccines free for newborns in 2002. Rates of hepatitis B virus (HBV) infection in children under the age of 5 dropped from 10% to 1%2. Other countries have made similar strides.

But there are still many countries, particularly in the Western Pacific region, Africa and southeast Asia, where levels of HBV vaccination, testing or treatment are inadequate. In these places, the ambitious goal of the World Health Organization (WHO) to reduce rates of viral hepatitis by 90% — and mortality by 65% — before 2030 seems far away, even though the medical tools needed to tackle the disease are available and affordable.

Disparities are stark (see ‘Unequal distribution’). The proportion of people with hepatitis B is nearly six times higher in low-income countries than in high-income nations, according to the Polaris Observatory — an initiative of the non-profit Center for Disease Analysis (CDA) Foundation in Lafayette, Colorado, which aims to eliminate hepatitis B and C globally by 2030. According to Polaris, 96% of hepatitis B cases are in low- and middle-income countries, and more than 65% are in Africa and the Western Pacific region. Yet, people living in places with the highest rates of hepatitis B are the least likely to be diagnosed, and that prevents them from accessing effective treatment.

To reach the WHO’s 2030 targets, hepatitis B needs a lot more attention and funding (see ‘Long way to go’). The COVID-19 pandemic has slowed progress, interrupting services and making goals even more challenging to reach, says Mehlika Toy, an epidemiologist and infectious-disease modelling specialist at Stanford University in California, who specializes in hepatitis B. “A few years back, we were still hopeful,” Toy says. “It will be very difficult to reach those targets.”

The hepatitis B vaccine became available in the 1980s. Since then, immunizations have made a major dent in the disease, says Yvan Hutin, director of the department of Universal Health Coverage, Communicable Diseases, at the WHO in Cairo. The vaccine is available all over the world, and most countries where the disease is present recommend it as part of their routine infant vaccination schedules. In China, which began using the vaccine more than 30 years ago, rates of liver cancer and chronic liver disease have declined substantially3. In sub-Saharan African countries, which adopted the vaccine only 10–20 years ago, younger generations are beginning to show major reductions in chronic infections.

Much of the world is on track or not far behind in their efforts to reach the target of eliminating HBV in young children, as long as they keep up their three-dose vaccination programmes, according to data from the Polaris Observatory, which collects and analyses global data on hepatitis B and C. But, first ‘birth dose’ vaccinations, which should be given within 24 hours of delivery, are still lagging behind (see ‘After birth’). Although the vaccine prevents transmission from an infected mother to her baby, just 49% of babies are getting the birth dose, according to the CDA. Rates are particularly low in Africa.

Closing the gap will require localized strategies, says Homie Razavi, who founded the CDA. The vaccine needs to be kept cold, and that can be challenging for transport to homes in rural areas where women give birth with the help of only a midwife.

While public-health organizations push for getting the birth dose to all newborns, Razavi says, health-care workers on the ground struggle with impracticalities. “We’ve been fighting over this for years and we keep going back and forth,” he says. “The governments are saying, it’s not the cost: it’s just not physically doable to be providing cold chains to these rural villages.”

For people born before childhood vaccines were available, bigger hurdles remain. Because it takes decades for an HBV infection to show up as cirrhosis or liver cancer, it is essential to screen and diagnose people during the silent period of infection, before symptoms appear, says Toy. That should be achievable: testing is simple and costs as little as US$0.40. Treatment with tenofovir, a medication commonly used to treat HIV that can prevent liver cancer, can cost less than $3 a month, Razavi says.

Economic modelling studies suggest that achieving such targets will require billions of dollars. In an analysis4 that included 67 countries, in which 230 million people live with hepatitis B, Hutin, Toy and their colleagues estimated that testing 5.5 billion people and treating 32 million individuals who have the virus would eliminate it as a public-health problem and avert 3.4 million deaths by 2030 (see ‘Big investments needed’). That amount of testing and treatment would cost US$927 for every life year saved5. “Progress is affordable, reasonable and highly cost effective,” Hutin says.

There is plenty of room for improvement in wealthy countries, too — including the United States. Reaching the WHO’s 2030 targets in the United States would require screening 14.5 million adults to diagnose about 870,000 cases, according to an analysis by Toy and her colleagues6. Taking those steps, they estimate, would reduce liver-related deaths by as much as 37%. Universal screening of adults in the United States would save $263,000 and avert 10 deaths for every 100,000 people screened, Toy and colleagues estimated in a paper published in 20217.

The elimination of hepatitis B will require organization, investment in infrastructure, political will and a sense of urgency that has been missing, in part because hepatitis B tends to affect people without access to resources (see ‘Silent disease’). “It’s a sad story in the sense that everything is available,” says Hutin. “What’s needed is somebody who says we’re going to do it.”

Overcoming stigma will be essential, Razavi adds. For now, many people don’t get tested because they don’t want to know if they are infected. In parts of Africa, people reportedly get thrown out of their houses for testing positive, he says. “In Asia, we hear stories about kids not being able to eat at the same table as other kids at school if they’re hep B positive,” he says. “So, the patients don’t want to talk about it.”

There are some signs of hope. The vaccination data are encouraging, specialists say. Multiple countries are changing guidelines to increase access to screening and treatment, Razavi says.

And projects such as the one that took place in Malawi between 2016 and 2018 illustrate how increasing efficiencies and mobilizing resources can assess the needs of various groups in a community and eventually change the landscape of the disease, Hutin says. “We really don’t have a huge amount of progress despite something that’s really easy to do and highly cost effective.”