The geopolitics of fossil fuels and renewables reshape the world 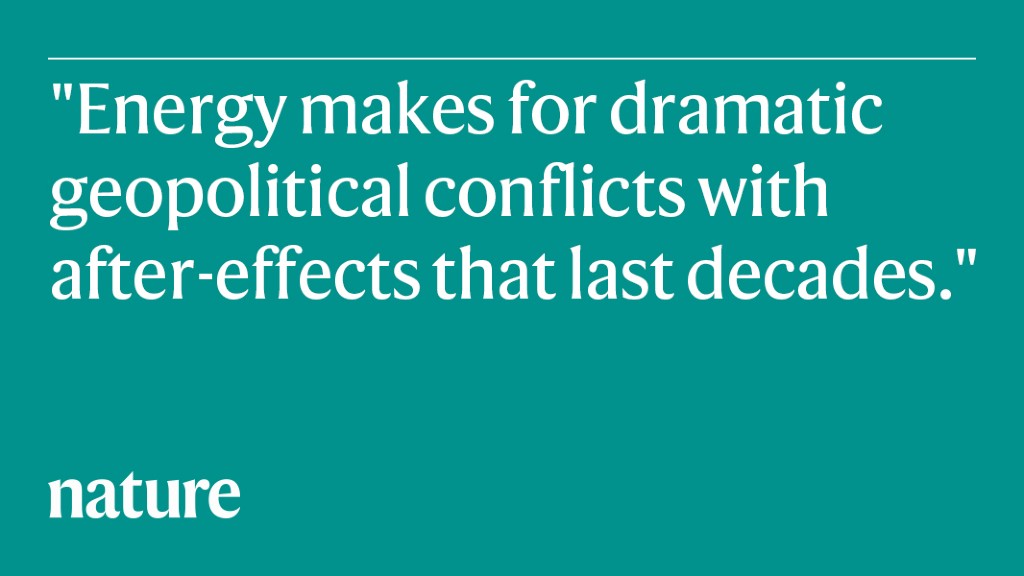 With 84% of our energy still coming from oil, coal and gas, much of the transition to renewable energy sources lies ahead. Just because a different future will arrive, it doesn’t meant that the present will simply cede the stage. Renewables do not change the centrality of energy to geopolitics. Nor, given that the energy transition will be a long one, will it quickly end the geopolitics of fossil fuels.

For nearly 200 years, fossil-fuel energy has been central to geopolitics. The relationship between western Europe and China changed decisively in 1839, when Britain deployed coal-fired steam ships in the First Opium War. This move opened up China to a succession of imperial powers. The turn to oil in the twentieth century made the United States the world’s dominant power and began the decline of Europe’s great powers. For the past decade, the United States and Russia have competed with each other to sell gas to Europe, as they did oil at the start of the past century.

Energy makes for dramatic geopolitical conflicts with after-effects that last decades. Take the Suez Crisis in 1956. US president Dwight Eisenhower used his country’s financial might to stop Anglo–French military action against Egypt that was designed to protect western European energy interests in the Middle East. The United States had encouraged these interests, wanting to protect supply from the Western Hemisphere for itself. Aghast that their supposed NATO ally could betray them, several European countries began their turn towards what was then Soviet, and is now Russian, oil. In the 1970s, this Soviet–European energy relationship was extended to gas.

Ever since Russia’s President Vladimir Putin first made it clear in 2008, in Georgia, that he does not accept the borders created by the dissolution of the Soviet Union, this dependency has constrained the European Union’s policy towards Russia. Complementary fossil-fuel interests have also turned China and Russia into tacit allies.

Energy research — from materials science to emissions modelling to carbon pricing — that does not account for such realities can only ever give a partial picture.

As early as the 1990s, it was evident that addressing climate change would be constrained by geopolitics, and that choices about which new energy sources to develop would have geopolitical consequences. The United States refused to ratify the 1997 Kyoto Protocol on greenhouse-gas emissions because almost the entire Senate thought that an agreement that imposed obligations on the United States but not on China — classed as a developing country — would disadvantage the US economy. Meanwhile, the 1998–2005 coalition government in Berlin moved to renewable energy and began to phase out nuclear power, deepening German dependency on Russian gas. At the same time, Putin began a two-decade strategic effort to remove Ukraine from Russia’s gas -transport system.

Climate change does create acute incentives for cooperation between geopolitical rivals, especially the world’s two largest carbon emitters: China and the United States. Despite the deterioration in Sino–US relations from around 2010, president Barack Obama struck an emissions agreement with Chinese President Xi Jinping in November 2014, which was the essential prelude to the Paris climate accord the following year. Yet even this moment of US–Chinese cooperation could not transcend geopolitics. In the same year, Xi also reached an agreement with Putin to build the Power of Siberia gas pipeline. This opened in 2019 and is the first to take gas east to Asia rather than west to Europe. For China, that is at least as important as an accommodation with Washington DC over climate.

States are competing to manufacture green-energy infrastructure, such as solar panels and wind turbines, and to mass-produce electric vehicles. In May 2015, the Chinese Communist Party announced a plan — Made in China 2025 — to turn the country into a superpower of high-tech manufacturing, including of electric vehicles, and ensure that it produces 70% of the core resources necessary. Former US president Donald Trump’s trade and technology war with Beijing was mainly a response to this Chinese ambition, and gained cross-party support.

There is a discernible fear in Washington DC that an age of green energy will be the age of China. Renewables infrastructure depends heavily on rare-earth minerals, whose production China almost entirely dominates. Deng Xiaoping, a former leader of the Chinese Communist Party, once quipped: “The Middle East has oil and China has rare earths.” Over the past decade, China has also been willing to use this control as a geopolitical weapon, imposing an export ban on all rare earths to Japan in 2010 after a conflict about a fishing trawler in the East China Sea. For the United States, playing catch-up on creating a domestic industry around the extraction of ‘tech metals’ has become a national imperative.

Quite simply, there is no way that governments — or the scholars who seek to advise them — can be serious about the energy transition without having a realistic strategy for the problems that history tells us will arise as the geopolitics of old and new energy sources and technologies combine. Unless these predicaments are faced — by citizens as energy consumers, by scientists and social scientists, as well as by governments — they will become ever harder.