The countries maintaining research ties with Russia despite Ukraine 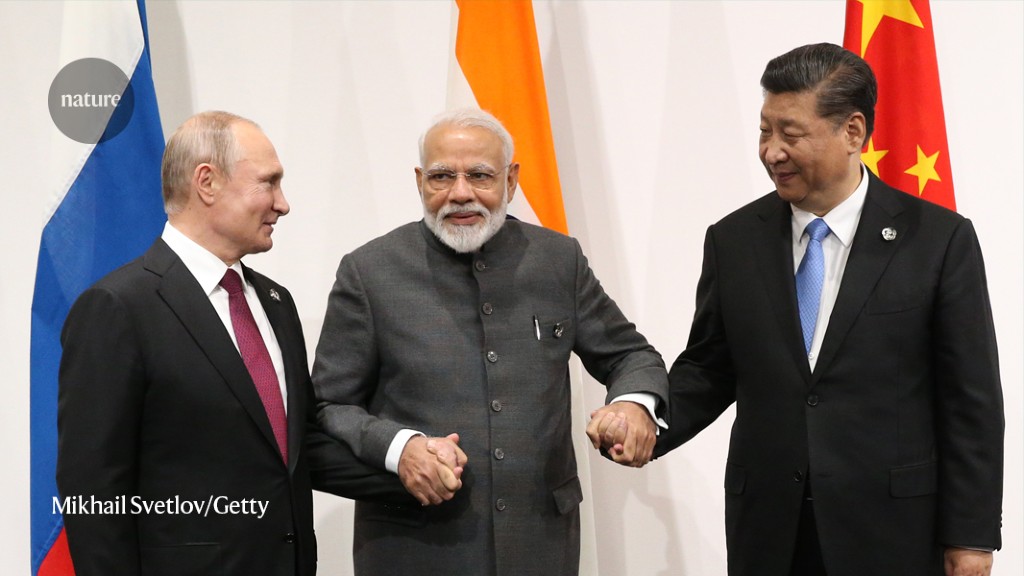 Is Russia’s invasion of Ukraine redrawing the map of international scientific cooperation? Whereas Europe and the United States are swiftly moving to cut long-standing ties, the governments of China, India, South Africa are maintaining links.

They are members of the BRICS, a group of five countries — including Brazil and Russia — that work together to promote trade and economic development, and have an active programme of scientific cooperation. Last year, researchers from the 5 nations organized some 100 meetings under the BRICS umbrella in a spectrum of fields including astronomy, climate and energy, health and medicine.

Vaccines are an important focus. India and South Africa are leading a campaign for intellectual-property relief on COVID-19 vaccines during the pandemic. Last month, all five governments announced a new partnership on vaccines research and development at a launch event on 22 March attended by science and health ministers. In a statement, Russia’s health minister, Mikhail Murashko, said the initiative would build on the first COVID-19 vaccines, which were developed and tested in BRICS countries. Russia approved its first coronavirus vaccine in August 2020.

And on 26–27 April, the five countries’ national science academies will host a meeting aimed at sharing data on biodiversity, climate and food security as a means to achieving the United Nations Sustainable Development Goals.

Brazil’s research leaders have openly said they are against the invasion. They have also set up a fund for scientists fleeing Ukraine, Russia and other conflict zones to come to Brazil. There is also opposition from researchers in South Africa, but it’s harder to determine what scientists in China and India think. Of those approached, none agreed to comment for this article. Some researchers in India and South Africa have published open letters condemning the invasion. South Africa’s government is advising research institutions — although not scientists — not to speak on what it calls the war’s “political aspects”.

China, India and South Africa are not alone in keeping ties to Russia. Comstech, an Islamabad-based organization representing science ministers from countries that are part of the 57-member Organisation of Islamic Cooperation (OIC), is discussing a long-term science-cooperation agreement with Russia, which is an observer state to the OIC.

The Chinese government says it maintains a “neutral stance” on Russia’s invasion of Ukraine. Universities, research organizations and funding agencies are not making public statements, but there are no signs that collaborations will be affected.

The past decade has seen a steady increase in research publications with authors from the two countries (see ‘Trend in Russia’s science collaborations’), although this is in line with China’s research growth with many more countries. Physical sciences stand out as popular fields for researchers from China and Russia — especially physics and astronomy, as well as materials science and engineering.

China and Russia designated 2020–21 a year of scientific and technological innovation, with plans for collaborations in nuclear energy, COVID-19 studies and mathematics, among other areas. Alexander Sergeev, president of the Russian Academy of Sciences in Moscow, is also one of the vice-presidents of the Alliance of International Science Organizations (ANSO), a 67-member network of research organizations around the world established by China in 2018.

“Economic sanctions on Russia will have little or no impact on ANSO’s activities,” predicts Qasim Jan, a geologist at Peshawar University in Pakistan and a former ANSO vice-president. That’s because, he says, “China provides most of ANSO’s funding”. Five institutions are involved in an ANSO project to study green economic opportunities involving China, Mongolia and Russia.

Space policy could be ripe for more cooperation, researchers are predicting, if Russia splits permanently from US- and European-led international space collaborations. In 2021, Russia and China’s space agencies agreed to work together to build a base on the Moon. This could now be “accelerated and potentially expanded”, says Malcolm Davis, who studies space policy at the Australian Strategic Policy Institute in Canberra.

And because selected Russian banks are now barred from the international financial-transactions platform SWIFT, payments between Russia and China are likely to use the countries’ respective currencies. Murad Ali, head of political science at the University of Malakand in Chakdara, Pakistan, who studies China’s international finance, says more than 20 countries have similar currency-swap arrangements with China.

In 2015, China also launched an alternative to SWIFT called the Cross-Border Interbank Payment System (CIPS). Before the invasion of Ukraine, the system was used for around US$49 billion in daily transactions, says Łukasz Kobierski, who studies international relations at the Institute of New Europe, a think tank in Warsaw. This compares with $5 trillion that goes through SWIFT daily, according to the US treasury. However, ongoing sanctions on Russia could see CIPS usage increase.

Some China–Russia science ties date from at least the 1950s, explains Isak Froumin, a higher-education researcher at the Higher School of Economics in Moscow, currently on sabbatical in Boston, Massachusetts. This is when newly communist China adopted the Soviet Union’s model of concentrating research in state-funded and state-directed academies of sciences. Relations between the two have been through turbulent times and China began to look west for scientific cooperation after the fall of the Soviet Union, Froumin adds.

Some observers are cautioning that China will not want to jeopardize its many existing scientific partnerships with Europe and the United States. China’s scientific community does not want to be isolated from the West, says Futao Huang, a higher-education researcher at Hiroshima University in Japan.

Over the past few decades, India has had less scientific cooperation with Russia than with Europe and the United States. But in December 2021, Indian Prime Minister Narendra Modi and Russian President Vladimir Putin agreed to strengthen scientific links between the two countries.

The leaders agreed on a lengthy list of topics on which they want to see more cooperation. These include: agriculture and food science and technology, the ocean economy, climate, data science, energy, health and medicine, polar research, quantum technologies and water.

This would be in addition to existing ties in nuclear energy and space. Russia has supplied India with nuclear reactors and fuel, and the countries’ space cooperation dates from the 1970s. In 1984, Rakesh Sharma, an Indian air-force pilot, joined the Soviet Union’s Soyuz T-11 expedition, becoming the first person from India to travel to space.

The new Modi–Putin science plan will not be affected by the invasion of Ukraine, says Jagannath Panda, head of the Stockholm Centre for South Asian and Indo-Pacific Affairs in Sweden. “New Delhi has a vested interest in ensuring such cooperation with the long-standing partner [Russia] continues despite disruptions.”

The last time the two countries scaled up their joint projects was 1987–90, when they established eight collaborative centres, including some in materials science, advanced computing and ayurvedic medicine.

India’s largest research partners (as measured by joint publications) are in Europe and the United States. Researchers with knowledge of how the Indian government organizes science told Nature that they do not anticipate these research relationships changing.

However, D. Raghunandan, president of the Delhi Science Forum, a non-profit science-policy organization, predicts that international sanctions will eventually have a more serious impact on India’s research collaborations across the board. Trade sanctions against Russia, he says, mean researchers in India and Russia might be unable to transfer research material between the countries. Moreover, banking sanctions are likely to prevent funds being transferred using international banks.

To get around this, India and Russia are reported to be discussing trading with each other using the rupee and the rouble instead of US dollars. However, Raghunandan warns there’s a risk that sanctions might extend to a ban on technologies that can be used for both military and civilian purposes.

“Monetary sanctions can be taken care of,” Raghunandan says, but he predicts trouble for India’s scientists if Europe and the United States decide to extend sanctions to apply to countries that have relations with Russia. “International collaborations in science will depend on how far the US and Europe are willing to take the sanctions. We do not know how the future will unfold.”

Unlike China and India, Brazil is expected to experience serious consequences for its joint projects as a result of international economic sanctions against Russia, some of Brazil’s researchers have told Nature. At the same time, scientists and funding agencies are organizing to support colleagues who need to flee either Ukraine or Russia.

Before the invasion, Ricardo Galvão, a fusion-energy physicist at the University of São Paulo, was expecting to start a collaboration with two of Russia’s largest physics institutes, the Ioffe Institute in St Petersburg and the Kurchatov Institute in Moscow. The project aimed to measure energy and rotation in the plasma inside tokamaks — doughnut-shaped fusion reactors with powerful magnets.

“Those plans were also destroyed by the missiles of this war,” Galvão says. At the very least, there will be delays and increased costs, he adds. In the first weeks after the war started on 24 February, the rouble lost 20% of its value against the Brazilian real.

Brazil’s research leaders are “obviously against war”, says Jerson Silva, a biochemist at the Federal University of Rio de Janeiro and director of the state’s science funding agency, FAPERJ. FAPERJ has launched a funding call for researchers in Rio de Janeiro who wish to host scientists fleeing Ukraine, Russia and other conflict zones.

The US$2-million-programme, which started on 24 March, will provide aeroplane tickets to Rio, travel insurance and a monthly stipend of 9,000 reais (around US$1,900) for up to a year. Some of Brazil’s 25 other science funding agencies, including FAPESP in São Paulo, are launching similar calls.

The goal, says biochemist Vânia Paschoalin, FAPERJ’s coordinator of international relations, is to allow Ukrainian and Russian researchers to continue their work. “The conflict ends,” she says. “Science doesn’t. Science is always alive.”

Some also disagree with the pressure to cut scientific links with Russia. Paulo Artaxo, an atmospheric physicist at the University of São Paulo, says: “You cannot exclude Israeli, South African or Russian scientists, because they are not responsible for [their] government’s actions.”

Brazilian Physics Society president Débora Peres Menezes also opposes a boycott. Peres Menezes, a nuclear physicist at the Federal University of Santa Catarina in Florianópolis, says physics is a collaborative science and some of her students have benefited from visiting research institutions in Russia. “Scientists should not individually pay the price of war.”