The brain is an ‘immunological wonderland’ 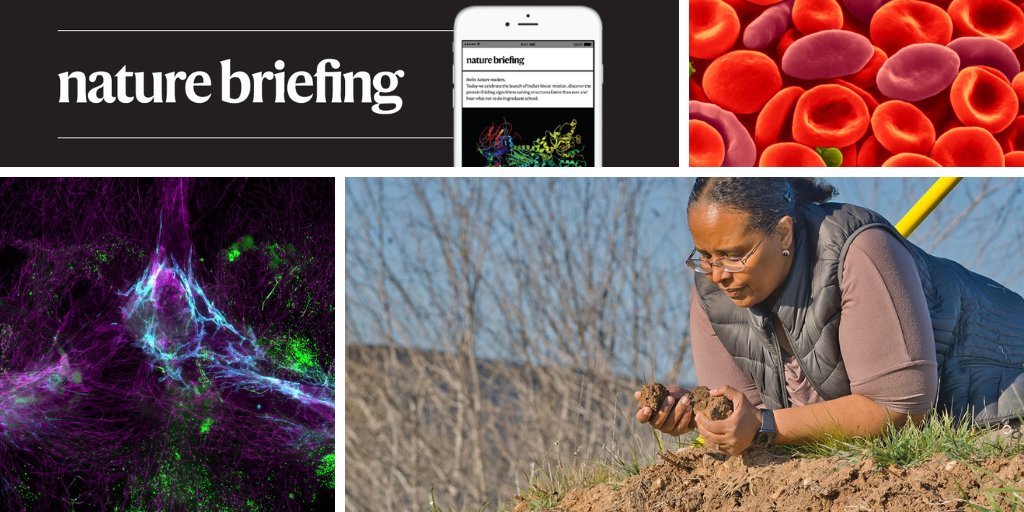 Gene-therapy research has undergone a renaissance, with a string of promising clinical-trial results against devastating genetic diseases, including sickle-cell disease. But immune responses can make the therapies less effective — and generate dangerous side effects. New approaches presented at the American Society of Gene and Cell Therapy meeting in May show promise for lowering the risk of an inflammatory response. “We are on a roll with gene therapy,” says Francis Collins, acting science adviser to US President Joe Biden.

The evolution of cockroaches to avoid sweet-tasting poison has disrupted their mating. Female German cockroaches (Blattella germanica) with an aversion to glucose are less likely to stick around to mate with males who offer edible gifts that degrade into the sugar. “When we think of evolution, we usually imagine wild animals, but actually, it’s also happening with small animals living in our kitchens,” says entomologist Ayako Wada-Katsumata.

A Japanese weather satellite accidentally witnessed the ‘great dimming’ of the red supergiant star Betelgeuse that began in late 2019. The satellite, Himawari-8, observed a cloud of dust and a drop in the star’s temperature by 140 °C, offering important clues to what happened to the star. The cause of the dust production, and whether it was related to the subsequent cooling, is not yet clear.

Researchers once thought that the brain was walled off from the rest of the body’s immune system, but an exciting picture is emerging of the brain as a unique immunological ecosystem. The brain’s border control actually does allow immune cells from the body into the fluid-filled membranes that surround the organ, which are an “immunological wonderland”, says neuroimmunologist Kiavash Movahedi. Special immune cells produced in the skull’s bone marrow could be gentler than normal immune cells. Researchers are exploring how these and other kinds of immune cells in the brain play a role in fighting diseases and could be harnessed in treatments.

Scientists working with the World Health Organization (WHO) have acknowledged errors in their COVID excess death calculations for Sweden and Germany in response to criticism. Their corrected estimates are down 37% for Germany and up 19% for Sweden. Excess deaths represent the increase in mortality above expected levels. Here, the researchers had improperly scaled, or adjusted, the raw mortality data, leading to expected death numbers that were erroneously high or low. “A role model on how to deal with honest public peer review,” tweeted demographer Jonas Schöley.

In a new book, physician Haider Warraich explores the neurobiology of pain and why doctors struggle to treat chronic pain effectively. Chronic and acute pain are distinct processes that activate different neural patterns and should be treated differently, he argues. Warraich’s points about the many biases that plague pain treatment are well taken, but his conclusions about which treatments are effective are too tidy, writes reviewer and Nature editor Anna Nowogrodzki.

Biogeochemist Asmeret Asefaw Berhe studies how physical changes to soil affect the carbon in Earth’s atmosphere. “I’m interested in how some soils hold on to organic carbon for hundreds, even thousands, of years without degrading,” she says. But erosion, fire, deforestation and desertification can release stored carbon. “Earth and soil science is an area that desperately needs more diversity,” Berhe says. “If we continue to exclude scholars from minoritized communities, we’re not just hurting them, we’re hurting the science needed to help us adapt to climate change.” (Nature | 2 min read)

Today, I’m pleased that four bumblebee species can legally be considered for protection under the California Endangered Species Act. The decision by a California appeals court includes the surreal assertion that fish is “a term of art”.

If you’ve ever found a term of art in the Briefing, I’d love to hear about it at briefing@nature.com! Thursday and Friday are holidays in the United Kingdom, so we’ll have a new Briefing for you on Monday.

With contributions by Smriti Mallapaty