Symphony of the Damned 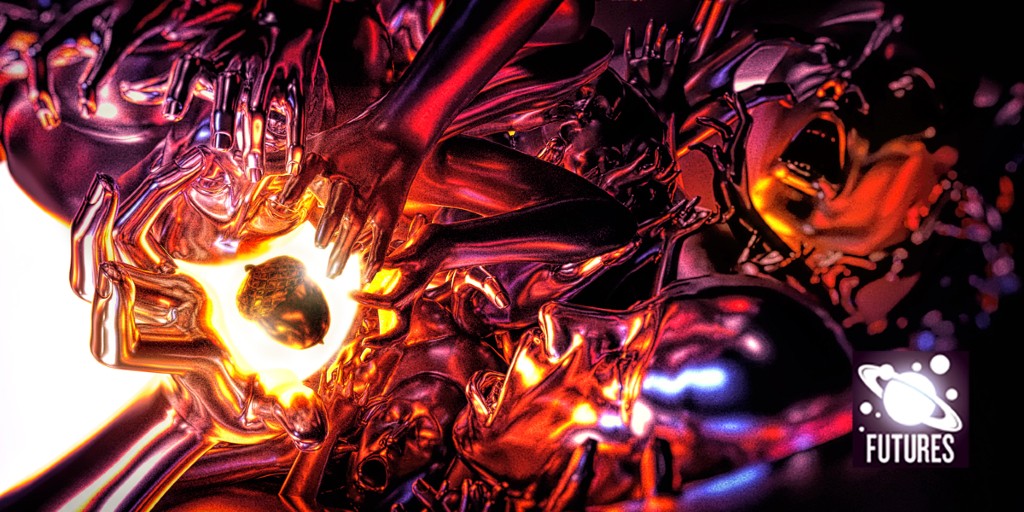 An old movie once claimed that in space no one can hear you scream. Oh, how I wish that were true.

The death throes of the tourist ship Green Echo have been broadcast on Earth for more than 20 years, ever since it was absorbed into a roving singularity just past Mars. Most of us can barely remember life before it. My daughter’s never known anything else.

I rise at 7:03 in the morning with the shrieks of Captain Gina Tarrant in my ears. She’s screaming about some monster with too many eyes. She sees it so often you’d think it wouldn’t scare her all that much anymore.

The dominant soundtrack then shifts to the suffering of video-game magnate Toshi Yamamoto, who at least isn’t as ostentatious in his misery as the captain. When I go downstairs to start breakfast, I see that Melanie is already sitting at the table, her face pushed up to a cereal box.

“Put your glasses on.”

She ignores me. Apparently, that’s a common malady among people born after the incident. With so many voices to listen to, why should kids pay heed to only one?

“What should I make?” I ask, a little louder.

In the Green Echo there’s a sickening crunch as creatures from another plane of existence chomp the hull to bits, but Melanie doesn’t even flinch. “Pancakes,” she says.

I take the box of mix from the shelf and start blending ingredients together. A loud gloppy sound resonates around us and I feel my stomach turn. I finish preparing Melanie’s breakfast anyway, and even choke down a few bites myself. The disgusting noise eventually abates.

Melanie wipes her lips with a napkin. “No, Terry’s mom is driving me.”

I help her get her books together and walk her to the door. As I do, engineer Mike Mason speaks in a hundred voices at once, which only happens about every two months or so. I’m rattled at the relatively rare occurrence, but Melanie’s pace doesn’t waver as she makes her way to Terry’s mom’s Subaru.

The singularity that swallowed the Green Echo is no longer in the Solar System, the scientists say. It folded in on itself like an ouroboros. They can’t explain why the voices of the dying travellers linger like ghosts, nor why the torture seems everlasting, other than a vague explanation that ‘time can be funny that way’.

The experts assured us that the singularity can’t hurt us anymore, but that’s a lie. The perpetually skipping cosmic record still has the power to emotionally wound. And that’s where we therapists come in.

Today I’m meeting with Kevin, whose neurosis revolves around one passenger in particular: Stacey Collins, a pharmaceutical heiress, whose anguish reminds him powerfully of the cries of his own mother as she’d died in childbirth.

“I know it’s not her,” Kevin says, his head in his hands. “But when she screams, I see my mom’s face. Then I can’t —” He starts sobbing again, reliving the memory.

Stacey Collins is a frequent note in the grotesque symphony that surrounds us, showing up on average every four days. If he’d been fixated on a relatively minor character like Mike Mason, Kevin’s problem wouldn’t be nearly so severe.

“Concentrate on the differences,” I say. This is supposed to be a technique for preventing emotional spirals, but based on the fact that Kevin’s barely made any progress in the time he’s been coming to see me, I don’t think it’s working.

As Kevin continues to blubber, the Cunningham twins belt out dual arias of agony. My office is equipped with sound dampeners, but they don’t do anything against the sounds emanating from the Green Echo. The extra protection just keeps the patients from hearing each other’s pain.

When I get home that evening, I find Melanie in front of the television. The singularity howls about her, several of the passengers attempting to make a doomed break for the exits, so she has the closed captioning on. But she doesn’t seem to be paying any attention to the programme, so I turn the television off.

Before she can answer, there’s a pounding beat that seems like it should shake all the picture frames from the walls, but of course it doesn’t. Melanie’s gaze is steady behind her glasses, but I suddenly don’t feel comfortable in this house.

The neighbourhood is full of families milling about. When the sonic detritus coming from the Green Echo gets too bad, people like to be outside among the living, a sort of reality test.

A reality test for parents, anyway. We’re the ones who need it.

We get to the park, and Melanie runs off to join a gaggle of neighbour kids at the swings. I sit on a bench, and try to ignore the unmistakable sound of some eldritch horror munching at the Green Echo, again and again and again.

“Lousy weather, huh?” says the man sitting next to me. There isn’t a cloud in the sky, but I know what he means.

As he points out his son, and we trade anecdotes, I almost can’t hear the captain’s bowels sliding out of her ruined body, or the ever-present drone of the security alarm, or the low-pitched beckoning of the otherworldly entity colloquially known as ‘The Summoner’. It all feels normal. Almost, anyway.

Melanie runs up to me, a handful of acorns in her tiny fist. The concerns of the Green Echo don’t seem quite so important right now.

Erica L. Satifka reveals the inspiration behind Symphony of the Damned.

Although this story involves a spaceship, its actual inspiration is social media and push notifications. If you have a phone at your side 24/7 — and these days, who doesn’t — then you know that push notifications can easily distract you from whatever you were supposed to be doing. The messages from the Green Echo act as a push notification for the entire world, forcing an unwilling audience to listen to an unending doom scroll they can do nothing about. And unlike in our reality, you can’t just put the source of this misery in a drawer.

The name of the Green Echo is a nod to a certain spacecraft owned by a particular billionaire known for giving rides to fellow billionaires, celebrities and other modern-day nobles. After all, they get the biggest megaphones in real life, right?