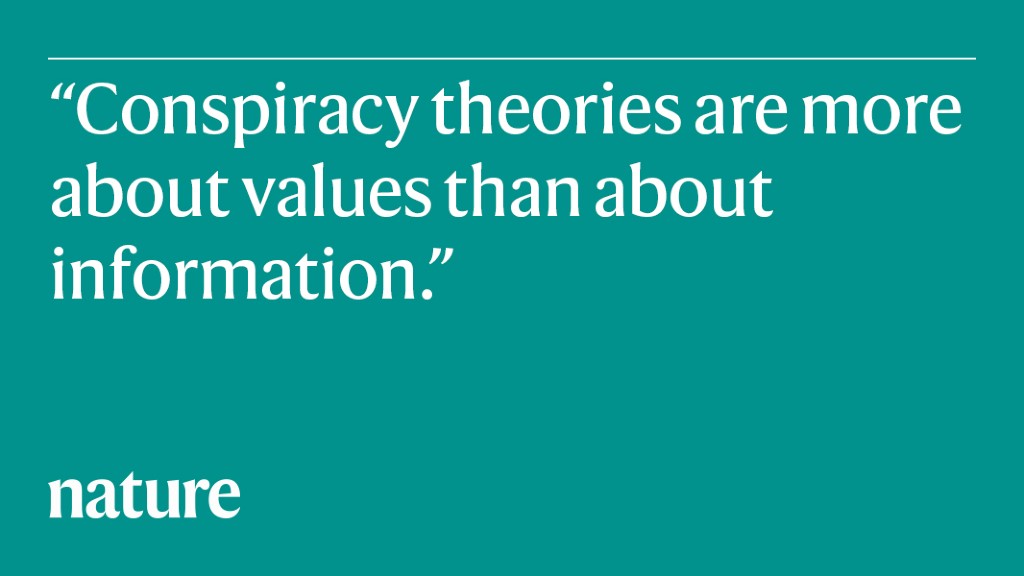 In 2019, a senior colleague warned me that my research focus was a niche area of a frivolous topic: conspiracy theories related to vaccine hesitancy among parents in Ireland.

My area is niche no longer. Motivated to end the pandemic, and to encourage vaccination and other health-promoting behaviours, many researchers new to the subject are asking how best to ‘confront’ or ‘fight’ conspiracy theories, and how to characterize people wary of medical technologies. But my field has worked for decades to push back on this tendency to pathologize and ‘other’. Whether researchers are trying to understand beliefs around vaccination or theories surrounding NATO, Russia and bioweapons labs, such framing limits what can be learnt.

Conspiracy theories are more about values than about information. Debunking statements might occasionally be effective, but does little to tackle their root cause. When investigators ask only about knowledge, they tend to see only ignorance as the root of the problem.

Let me be clear: I am in no way arguing that conspiracy theories are harmless. It is precisely because they are so dangerous that it is crucial to understand their causes. It’s not enough to study individuals and their ideas: we must consider societal structures, and cultural and historical contexts that generate and propagate conspiratorial ideas.

First, some basics. Conspiracy theories do not exist in a vacuum. They amplify existing fears and ideas about people’s place in the world. Researchers should consider what rallying around such theories says about fears over global power struggles or scientific advances, or about indignation over the status quo or societal changes.

It is not useful simply to say, “People who feel powerless embrace conspiracy theories.” Researchers must learn why people feel this way. Often, it is because of mistreatment by other people or institutions. Women who have experienced oppressive reproductive regimes, such as that in Romania during the regime of Nicolae Ceauşescu, frequently opt out of immunization. People who get vaccinated generally do so not because of an understanding of immunology, but because of trust in — and access to — health-care systems.

Over the first months of the pandemic, I worked with anthropologist Elisa Sobo at San Diego State University in California to analyse social-media posts that touched on COVID-19 conspiracy theories in three countries (E. J. Sobo and E. Drążkiewicz in Viral Loads (eds L. Manderson et al.) Ch. 4; UCL Press, 2021). Although specific theories seemed similar (‘the government is hiding the truth about the disease’), the cultural reasoning differed. In the United States, conspiratorial tropes were framed as an attack on self-built prosperity. In Poland, they reflected concern that the state was hiding its failures. In Ireland, the discourse hinged on fears tied to post-colonial memories of British rule and suspicion of foreign influence. To gain traction, conspiracy theories had to resonate with localized histories. To counter medical conspiracy theories, institutions must be aware of these histories and be ready to incorporate them (not just medical facts) in campaigns. ‘One size fits all’ explanations or strategies are not the best way to counter conspiracy theories.

Here’s an example from my research in Ireland (E. Drążkiewicz Grodzicka J. Cult. Res. 25, 69–87; 2021). For decades, state and church ran ‘charity’ institutions in which ‘fallen women’ who became pregnant outside marriage were subjected to forced labour, illegal adoptions and, sometimes, unethical clinical trials. These Magdalene Laundries and similar places represent notorious welfare scandals. They made it easy to believe rumours that programmes to prevent a sexually transmitted disease with HPV vaccines actually caused harm.

Ireland’s low HPV vaccination rate was caused by a deficit not in knowledge, but in trust, and so the solution was not to debunk specific rumours, but to make health services more trustworthy. Ireland ran a ‘Protect our future’ campaign that emphasized the importance of trustworthy information, but its ultimate goal was to convince people that the government has nothing to hide, and clinicians’ main motivation is their duty of care. The vaccination rate went up from 56% in 2016–17 to 76% in 2019–20.

Another counterproductive tendency, in my view, is the quest to create a profile of ‘those people’ who engage with conspiracy theories, obsessing over characteristics that make them distinct — especially from the researcher. This othering is, in part, a legacy of a field that has frequently opted to study people drawn in by, say, fantastic stories of alien abductions rather than more-plausible beliefs such as corruption scandals. But much of this ‘us versus them’ framing has to do with researchers’ motivations. Many, myself included, want to defend democracy and science, so it is easy to define those who embrace conspiracy theories as a threat or enemy. But that deflects researchers’ attentions to individuals and their beliefs, and stops them looking at the systems that push people towards conspiratorial circles.

I understand and share concerns that a more empathetic approach has risks. I’ve been accused of giving visibility to views that would be better dismissed. But it is important to examine the structures that make conspiracy theories appealing. A focus on individuals’ perceived deficits diverts attention from the social realities — displacement, alienation, repression — that make false theories resonate.