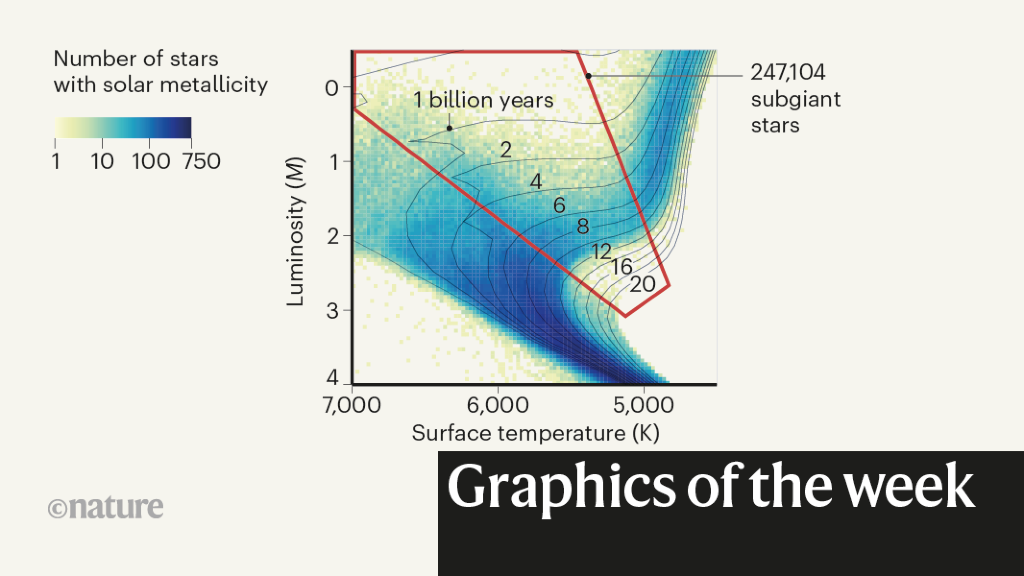 This beautiful graphic explains how scientists calculated the ‘birth date’ of stars — the precise time at which they formed from the chemical elements in their vicinity. A paper in Nature reported the ages of almost a quarter of a million stars in the subgiant phase of evolution — which occurs when a star runs out of core hydrogen — as a means of understanding how the Milky Way formed.

Using data obtained by the Gaia satellite mission and the Large Sky Area Multi-Object Fibre Spectroscopic Telescope survey, the authors plotted luminosity (measured in M, absolute magnitude) against surface temperature. From this, they derived estimates of metallicity — a logarithmic ratio of iron to hydrogen number density — measured relative to the Sun. They could then obtain ages for 247,104 subgiant stars by comparison with ‘theoretical isochrones’, the lines on the graph that represent stars of similar ages and metallicities, corresponding to star ages between one billion and 20 billion years.

Over the past decade or so, bibliometric assessments have shown how citation rates for men are, on average, higher than those for women across a wide range of fields — even when controlling for other factors that might influence citations, such as author seniority, or the year or the journal in which a paper is published. This graph shows one such data set.

A gap exists among racial and ethnic categories, too, with white scholars being cited at higher rates than people of colour in several disciplines. An increasing number of researchers are calling on academics to acknowledge the inequities in citational practices and take action to reduce them, as our Feature explains.

Which graph is best?

Data scientists working on the UK COVID-19 dashboard regularly survey users to see how well data visualizations are understood. In one test, they asked users which of three vaccination visuals they liked best, and explored how users interpreted each one. People tended to prefer a type of bar chart — Option A — but couldn’t accurately identify the proportions it represented. Ultimately, the dashboard team opted for a ‘waffle’ chart design — Option C — because the polling showed that users understood it better.

This Feature explores more about what dashboard developers have learnt about communicating science in a crisis.