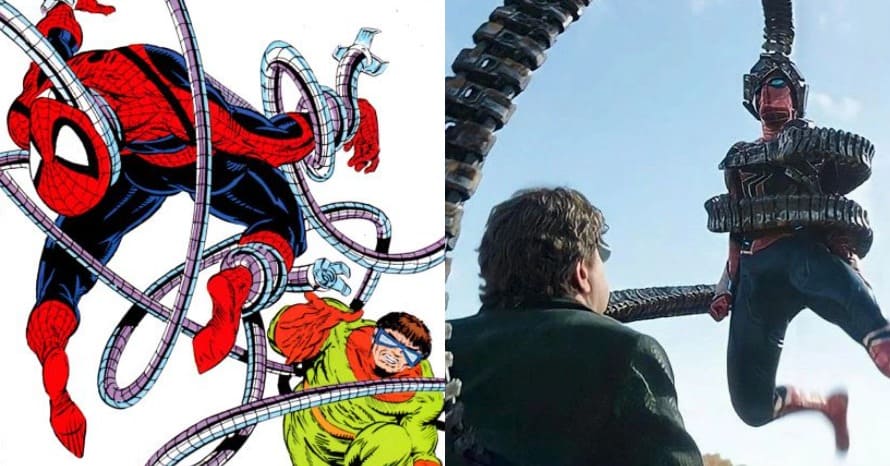 In a pair of posts on Instagram, Meinerding gave followers a look at some of the concept art he created for Spider-Man: No Way Home. The posts revealed keyframes created for the scene in which both Alfred Molina’s Doc Ock and Willem Dafoe’s Green Goblin are first revealed. As well as the Goblin’s dramatic appearance through clouds of smoke, the concept art offered a look at Ock snatching up Spider-Man in his mechanical arms.

Meinerding wrote that the image of Doc Ock grabbing Spider-Man, who is depicted in his Iron Spider armor, was “heavily referencing an awesome Marvel Tales cover by Todd McFarlane.” The cover in question comes from Marvel Tales #224 and features a similarly posed Doc Ock seizing Spider-Man, the supervillain’s metallic tentacles encircling the wallcrawler’s wrists and neck in the same way as seen in the concept art. Check out Meinerding’s post below:

Keyframe concept art such as this is often used to give directors and production teams a flavor of what a finished scene may look like, rather than serving as a strict guide for moments as they should appear in the finished film. As such, this nod to Spider-Man comics legend, Todd McFarlane, did not make its way into the final cut of the film. However, it is a nice look into the dedication to the Marvel Comics source material shared by everyone who worked on No Way Home.

You can also check out Meinerding’s vision of the Green Goblin’s first appearance below:

See Doc Ock and the Green Goblin in action in Spider-Man: No Way Home. Here is the official synopsis: