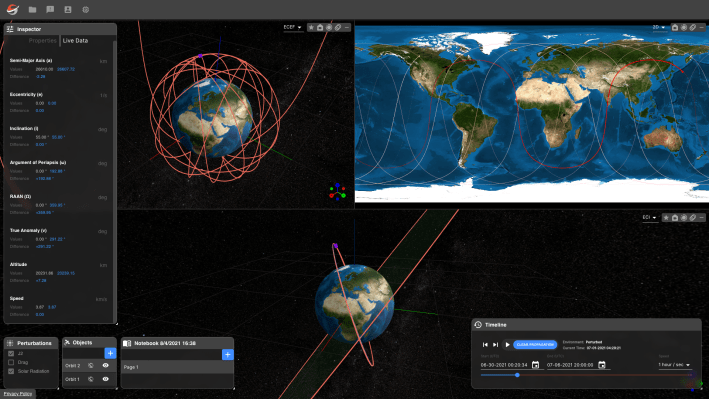 Space simulation and analytics company Slingshot Aerospace has been awarded a $25.2 million, 39-month contract by the U.S. Space Force (USSF) to further develop and deliver two of its products: Digital Space Twin and Slingshot Laboratory. The contract was funded by Space Systems Command and the USSF’s venture branch, SpaceWERX.

Digital Space Twin is a virtual environment that not only provides a realistic simulation of the physics at play in orbit, but also reflects what’s going on in space in real-time, using multiple data sources to map the current location of bodies in orbit (satellites and space junk) and account for space weather. The program can be used to simulate missions as well as plan for future satellite constellations — something beneficial for governmental and commercial entities alike.

“It was important to us since the very beginning to create products that work for both government and commercial use,” Melanie Stricklan, Slingshot Aerospace’s co-founder and CEO tells TechCrunch. “It will take a collective effort across all commercial, government and civil organizations to ensure that space remains a tenet of our global economy for generations to come, which is why our products have gained traction in both sectors.”

For defense agencies, in particular, Digital Space Twin can also be used for war games. (Ender’s Game, anyone?) Per a press release, “the USSF will use Slingshot Aerospace’s Digital Space Twin to visualize potential nefarious acts that could occur in orbit. By being apprised of and understanding the impact of current threats, users can employ known data to plan and simulate responses and predict future adversary behavior in order to maintain national security.”

Slingshot Laboratory, on the other hand, is a training program with virtual environments that reflect astrodynamics and astronautics — essentially it’s a physics-driven sandbox game to help students conceptualize the space environment in an immersive, interactive way. The USSF plans to run pilot programs at Basic Military Training (BMT), the National Security Space Institute (NSSI), the 319th Combat Training Squadron, and the 533rd Training Squadron.

Before the USSF’s investment, Slingshot Aerospace’s primary product was Slingshot Beacon, a satellite collision avoidance program whose clients will comprise 63 percent of all satellite constellations in low Earth orbit by the end of 2022. The program recently raised $34.6 million over a two-part Series A round, but it does face competition from companies like LeoLabs and Kayhan Space. But Slingshot’s priorities may be shifting with the new contract.

“Slingshot’s Digital Space Twin is quickly gaining fidelity with the large investments our company has privately made towards the product in addition to the investments we have received from the government,” says Strickland. “Our Digital Space Twin is on track to soon become our flagship product due to the clear value it has for a vast array of customers across the industry including spacecraft owner-operators, launch operators, manufacturers, insurers, and future space-related product developers.”

It’s a classic case of where the money goes, innovation will follow.