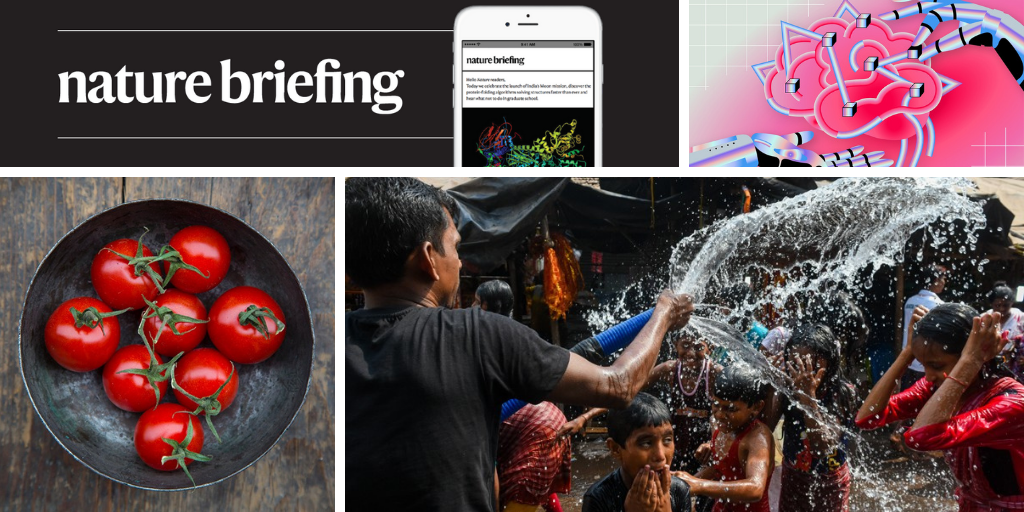 Tomato plants that produce a precursor to vitamin D could one day provide an animal-free source of the crucial nutrient. Because scientists didn’t insert new genes — they just switched one off, a mutation that could also have occurred naturally — the plants will face fewer regulations in many countries. Researchers managed to find a rare case in which this kind of gene editing can be used to boost the nutrient content of a crop (rather than to remove an allergen, for example). The plants have not yet been developed for commercial use, and it is not known how they will fare when grown outside.

Global warming made this year’s deadly and long-running heatwave in India and Pakistan 30 times more likely to happen. A rapid analysis by scientists at the World Weather Attribution (WWA) initiative looked at the average daily maximum temperatures across northwestern India and southeastern Pakistan between March and April. Researchers found that climate change increased the probability of similar temperatures occurring to once in every 100 years — the odds of such an event would have been once every 3,000 years in pre-industrial times — and that the event was around 1 ºC warmer than it would have been before industrialization. The WWA analysis follows closely on the heels of a study from the UK Met Office, which assessed the heatwave that gripped the region in 2010 and found that climate change has made such record-breaking events 100 times more likely to happen.

Scientists sent salamanders soaring in a vertical wind tunnel to learn how they survive jumps from the tops of the world’s tallest trees. Videos show how wandering salamanders (Aneides vagrans) reduce their speed by up to 10% by pumping their tail up and down and spreading their limbs like a skydiver. The salamanders live among the old-growth redwood trees on the west coast of North America.

Chemist Yurii Moroz is the executive director of Chemspace, a market-place for small molecules and biomolecules headquartered in Kyiv. In a quietly moving essay, he shares the impact of three months of Russian attacks — from the unexploded cluster bomb in his grandparents’ garden to his forced separation from his children. Still, he and a few remaining colleagues carry on, sometimes working from an air-raid shelter under the stairs in the office. “We feel it’s important for us to do our part, as providers of crucial materials for scientists, but also as Ukrainian citizens,” he writes. “When the sirens start, we unplug our laptops, take our personal documents and plod down the stairs.”

Several scientists are among Time’s pick of the 100 most influential people of 2022. Among them:

• Immunologists Tulio de Oliveira and Sikhulile Moyo, who led the genetic sequencing of SARS-CoV-2 and the Omicron variant, are introduced by John Nkengasong, the director of the Africa Centres for Disease Control and Prevention.

• Genomics researchers Adam Phillippy, Karen Miga, Evan Eichler, Michael Schatz, of the Telomere to Telomere consortium, which sequenced the most complete version of the human genome ever, are profiled by Nobel-prizewinning biochemist Jennifer Doudna.

Hooray! A statue of pioneering palaeontologist Mary Anning (and her beloved dog Tray) has been unveiled in her hometown of Lyme Regis, UK. Briefing fans will remember that the campaign to raise the statue was started four years ago by 11-year-old Evie Swire, who is now, unsurprisingly, 15. “It’s taken a very long time, I’m not as big a fossil fan,” says Swire, who nevertheless persisted in her effort to see Anning properly recognized. Well done for sticking with it.

We’ll be sticking with this newsletter and would be delighted to hear what you think of it. Please send your feedback (whether positive or critical) to briefing@nature.com.

With contributions by Nicky Phillips