Queen of carbon, champion of women in science 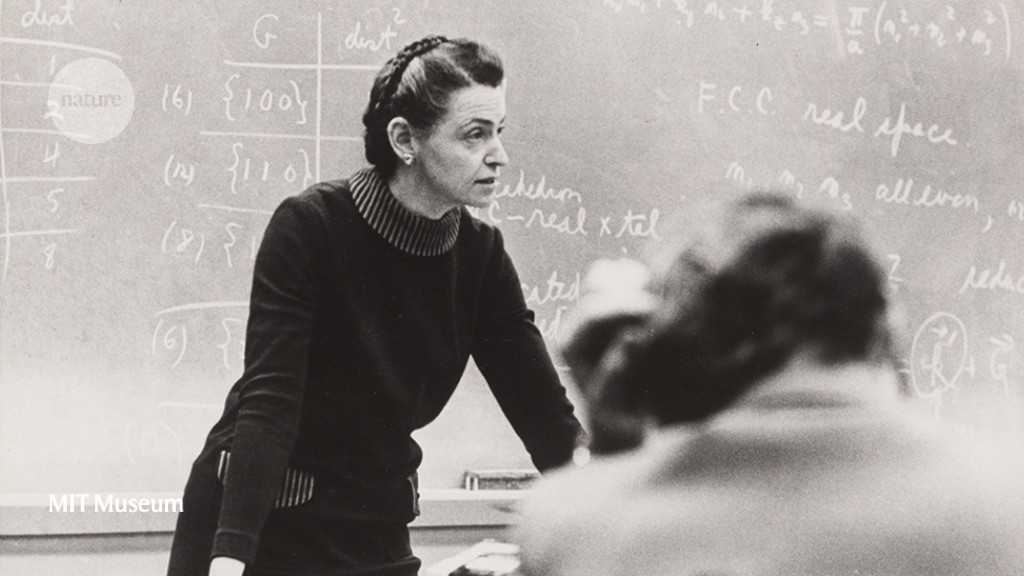 Carbon nanostructures are all around us, from sports gear to microelectronics and reinforced concrete. Among the people we have to thank for that is Mildred Dresselhaus. Her trailblazing research into the fundamental physics of materials such as graphite and carbon nanotubes in the second half of the twentieth century, and her advocacy of equality in science, saw her dubbed queen of carbon.

Among the stars of her generation, Dresselhaus overcame hardship and discrimination to win just about every honour short of a Nobel prize. Even before she began hobnobbing with scientific celebrities — taking daily walks with physicist Enrico Fermi, for example — Dresselhaus’s childhood talents as a violinist earned her an audience with first lady Eleanor Roosevelt. By the end of her illustrious career, a 2014 visit to Washington DC to receive a US Presidential Medal of Freedom from Barack Obama was almost a footnote. Now, science writer Maia Weinstock chronicles Dresselhaus’s extraordinary life in the spirited biography Carbon Queen — bringing to it the same exuberance with which she once created a custom Lego figure to celebrate her heroine.

Born in 1930 to Polish Jewish immigrants in Depression-era New York City, Dresselhaus was a determined student. Food was often so scarce that she began working odd jobs at the age of eight to support her family, Weinstock relates — even while competing for the limited educational opportunities afforded to girls. After postgraduate physics studies at Harvard University in Cambridge, Massachusetts, she earned her doctorate from the University of Chicago in Illinois in 1958. The same year, she married physicist Gene Dresselhaus, who would become a collaborator.

In the 1960s, at the Massachusetts Institute of Technology (MIT) Lincoln Laboratory in Lexington, Dresselhaus fell for the physical properties of carbon — an intellectual challenge but a research backwater at the time. “The little bit I learned made me wonder why no one was interested,” she told The University of Chicago Magazine in 2015. There was little pressure to churn out findings at the breakneck pace of more fashionable topics. This gave Dresselhaus a buffer against academic expectations as she raised four children with her husband, Weinstock explains.

Dresselhaus wanted to understand how electrons flow through graphite, which is made of stacks of single-atom-thick sheets of carbon bonded in a network of hexagons like a honeycomb. Graphite has some of the same properties as a conventional semiconductor but its electronic structure is unique, and Dresselhaus recognized that the unassuming material might be hiding some fascinating physics, Weinstock writes.

One of her earliest moments of acclaim came from a 1968 paper upending the prevailing view of graphite’s electronic structure (P. R. Schroeder et al. Phys. Rev. Lett. 20, 1292; 1968). It was so controversial that a reviewer revealed himself to Dresselhaus to warn her against publishing. She and her colleagues went ahead knowing that they risked ruining their careers, as she recounted in a 1987 lecture. The work unleashed a flood of publications confirming the findings, and jump-started a broader interest in carbon-based materials.

Dresselhaus made a habit of bucking trends, following her experimental evidence even when the conclusions ran counter to accepted knowledge. In the 1980s and 1990s, she made discoveries that presaged the existence of buckminsterfullerene, or ‘buckyballs’, and the possibility of elongating these carbon spheres to form ‘buckytubes’. She predicted that the properties of a nanotube, made of a rolled-up sheet of carbon a single atom thick, would depend on the orientation of the hexagons. This was validated years later.

In the final chapter of her research career, Dresselhaus worked on the fundamental properties of graphene, a single sheet of carbon atoms that looks like chicken wire. When Andre Geim and Konstantin Novoselov won the 2010 Nobel Prize in Physics for “groundbreaking experiments regarding the two-dimensional material graphene”, both acknowledged Dresselhaus’s contributions in their award speeches.

The queen of carbon was also a champion for women in science, as Weinstock shows. Early in her career, Dresselhaus was often the only woman in a research group or institution. One adviser told her that fellowships and grant money were wasted on women. Such blatant discrimination made it difficult for her to envision a long-term future in research — she expected that her presence in a male-dominated laboratory would be tolerated at best — but she persevered. Weinstock’s biography takes pains to present Dresselhaus’s ideals to a modern audience that considers tolerance of scientists from historically excluded groups to be a bare minimum for equity. Although Dresselhaus did not dwell on these incidents, Weinstock highlights how she decided to pay forward the support she got from mentors such as Nobel-prizewinning physicist Rosalyn Yalow.

As a tenured professor at MIT, Dresselhaus advocated for admissions reforms and created support systems that cultivated the inclusion of more women at the institution and beyond. Rising through the ranks of academic administration, in 2000 she became director of the US Department of Energy Office of Science, where she managed national research laboratories and a budget of US$2.8 billion, and continued to champion young scientists.

Weinstock navigates the complexities of theoretical physics and research bureaucracy deftly. She describes forms of carbon — from diamond to graphite — and their properties with sleek diagrams and colourful analogies that unpack basic principles and broader implications. And she situates Dresselhaus in the cultural context of her time in research. But the rosy rags to riches telling often flattens Dresselhaus as if she were a character from a fairytale, fated to change the world. Nevertheless, as a much more recently trained chemist, I found the story an arresting reminder of the shoulders on which we now stand.