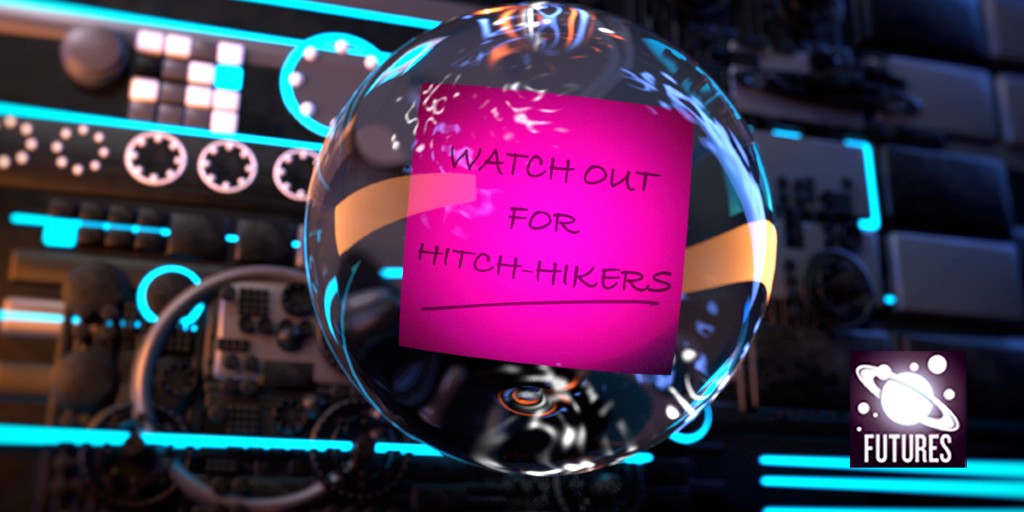 “We handle your most complex cases.”

I’d had about three drinks when I hit upon the premise and a few more by the time I came up with the slogan. Complex? Get it? Well, don’t drink and derive, as they say. My maths had a few twists and turns in it, but it got me where I needed to go.

Where am I? Imaginary space, of course. Not Neverland or Lilliput or Flatland … well, maybe a bit like Flatland.

The truth is simple, even if the maths is complex. I just made a right-hand turn in one of those other dimensions, like the ones the string theorists are always talking about.

Just a little twist and you’re in another dimension. Another twist and you’re back on the road again, just headed in the opposite direction. Two wrongs don’t make a right, but two rights make a U-turn. i times i is negative one.

The first time I did it, I wound up flipped around. Lewis Carroll had the right idea about the looking glass, but human biochemistry is chiral. Mirror-image humans just wind up confusing the hell out of emergency-room doctors. I found that out the hard way. Although … our fingerprints are flipped and that can have its advantages.

The trick is to twist the dial four times in total. i4 is one, after all, and you’re back where you started.

So, what’ll it be, sir or madam? There seems to be some interdimensional distortion. I can’t quite make you out. Are you on the lam? Want to spy on your spouse from one Planck length over in one of those zany dimensions? Need to stash a body? I can make it happen, for a fee.

You want to go home? OK. That might be a bit of a puzzle. You must be from one of those curled-up dimensions — what? Oh, from your point of view our dimensions are curled up and yours are just fine? I never thought about it that way before.

OK, the distortion is getting bad now. Can you speak up? Your call? Claw? That’s it. Your claw got caught up in the cogs of my machine. That would have been … Thursday afternoon. I did take a long weekend. Well, what have you been doing all this time since then? Ah, well that explains the mess in my lab and all the sirens. Well, let’s get you back home to your … broodlings? Or are they spawn? I never know the right word these days.

I’ll just give the dials a little twist, this one, then that one. Hold on with all your tentacles. I would hate to let you off facing the wrong way.

I said this is your stop, out there with all those fractals. I can hear shrieking. That must be your brood. They’re waiting for you, so just release my machine and I’ll be on my way.

Now … now wait just one minute. I run a private detective agency, not a taxi service. I brought you back to your dimension of origin as a courtesy, and I will — hey, let go of that. The transdimensional resonator is delicate, and you mustn’t get it wet. I don’t want to have to pack it in rice again.

Look, you are being completely unreasonable. For one thing, your brood will never fit on my machine. There are just too many of them. And another thing, the local police will be quite upset at me from your last outing in our dimensional space. If your whole brood came back with me … Well, for one thing, they would block out the Sun, and we’ve been having such nice weather lately. I simply cannot offer passage.

All right. I’ll give you full marks for creativity. Having each broodling bite the tail of its neighbour to form long chains was a brilliant solution to the problem of too many passengers, but this really won’t work. I understand they need to feast on flesh to grow to the larval stage, but I rather like my hometown and I could not bear to see it picked clean by a swarm of —

Let go of the dials. I guess this is my fault, partly. I never should have explained to you how the dials work.

If you insist on forcing the issue, I’m going to have to twist this dial over here twice, but not before I write a little note to myself — WATCH OUT FOR HITCH-HIKERS. I’ll just put it in a stasis bubble on the dashboard.

The great thing about setting time to −1 is that I never remember why I’ve done it. I find it eases the conscience. Farewell, extradimensional creature. With luck, someone will turn you back around before you revert to your egg stage and vanish.

Hello there, creature! I almost didn’t notice you. You seem familiar. Have I seen you before?

I’d tell you about my services, but I can’t have any hangers-on today. It says so right here on this note. I’ll just fire the manoeuvring jets to dislodge you and send you on your way.

It’s now a lovely Thursday afternoon. I feel rather fatigued for some reason, too tired to take on any clients. Maybe I will take a long weekend.

S. R. Algernon reveals the inspiration behind Private i.

I was a physics major for all of three weeks as an undergraduate (at 8:00 or so in the morning). I recall watching the professor write equations on the board that used complex numbers to describe simple harmonic oscillation, like the motion of a tuning fork. I understood the concept of imaginary and complex numbers. At the time they seemed counterintuitive, bordering on paradoxical.

My physics professor liked to throw us into the deep end of the mathematical pool. For instance, he told me at one point that the best way to encounter multiple integration for the first time was to see it on the exam paper. So, I was very much out of my depth. I lacked a metaphor to understand the equations on the board. I just memorized them, feeling like a sorcerer’s apprentice memorizing a spell.

Earlier this year, I was thinking back to my attempts to understand complex numbers. A metaphor occurred to me. Left-hand turns and right-hand turns are both operations that, if done twice, negate a vehicle’s velocity. I don’t know if this metaphor works for physicists and mathematicians, but it helped me understand how circular motion in a complex plane translated to linear harmonic oscillation.

So, I decided to write a story about it.

I first imagined a vehicle that could make right or left turns in ‘imaginary’ dimensions (aside from the usual three). I figured that private investigators could hide out in adjacent dimensions and spy on their targets.

As I wrote the tale of the extradimensional travels of a hard-boiled private eye, the story came to me as a one-sided conversation. The vaguely Lovecraftian interloper added some tension and gave our protagonist a problem to solve. My sleepy, frustrating hours in physics class might not have led to a career in quantum mechanics or xeno-climatology, but at least it led to a good story.