‘Out of control’ Omicron threatens China 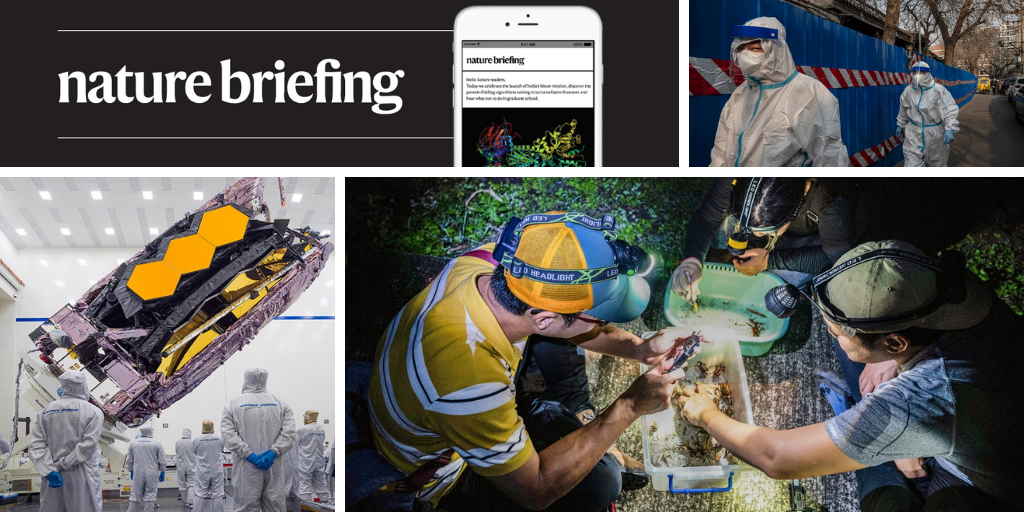 Outbreaks of the fast-spreading BA.2 Omicron variant in all 31 Chinese provinces have plunged tens of millions of people into lockdown. President Xi Jinping announced earlier this month that China would stick to its ‘dynamic zero-COVID strategy’, but also flagged some softening of the approach. Some scientists are concerned that the spread is now out of control. Unrestrained infections could lead to widespread deaths, partly because only 50% of people over the age of 80 — many of whom live in rural areas — are fully vaccinated.

Internal NASA documents obtained by Nature reveal fresh details about the agency’s investigation last year into whether to rename its flagship James Webb Space Telescope. Some astronomers felt that Webb was an unsuitable namesake because he had allegedly been complicit in the persecution and firing of gay and lesbian federal employees during his career in the US government in the 1950s and 1960s. In September, NASA declined to rename the telescope, but did not give detailed reasons why. The newly revealed documents indicate that it was a “custom within the agency” to fire people for “homosexual conduct” at the time Webb was administrator. This partial glimpse into NASA’s decision-making is unlikely to assuage critics who say that the lack of transparency has damaged trust with some astronomers, especially those in the LGBTQ+ community.

Researchers are trying to establish whether existing COVID-19 vaccines and treatments can prevent lasting symptoms. Several studies that looked at how vaccination might lessen the risk of long COVID have yielded divergent results. But the overall trend suggests the risk is cut by about half among those who become infected after vaccination.

Other studies are looking at the impact of early treatment with antiviral drugs, such as molnupiravir, developed by Merck and Ridgeback Biotherapeutics. But long COVID is not always associated with serious acute illness. “There are loads of people out there who are really destroyed by long COVID and had asymptomatic or near asymptomatic infections,” says immunologist Danny Altmann. “It’s really hard to grapple with.”

“Efforts to regulate social media have largely stalled, perhaps because no one knows what something better would look like,” argues computational social scientist Chris Bail. He and his colleagues have created a social-media platform that they can tweak to identify which features improve social cohesion. He explores how scientists, governments and tech companies might build a platform to gather evidence-based insights into making social media more beneficial to society.

Last September, governments attending a COVID-19 summit in the United States committed to vaccinating at least 70% of the population in every country within a year. But nearly 100 countries will fall short of that objective, estimate four global-public-health researchers. “These delays translate into millions of avoidable hospitalizations and deaths,” note the authors. They argue that vaccination plans should prioritize the most vulnerable groups, build capacity for immunizing adults, target misinformation and support vaccine-manufacturing hubs in underserved regions.

Afghanistan is once more the only country in the world where girls of secondary-school age are prevented by a national government from going to school. Tens of thousands of female students over the age of 12 were sent home on 22 March after the Taliban government broke its pledge to allow girls and women to attend educational institutions. “Two years ago, a UN target (part of the Sustainable Development Goals) to get all of the world’s children into schools finally looked to be within reach,” says a Nature editorial. “Last week’s scenes of girls being sent home, their hopes destroyed, remind us that the world can never take learning for granted.”

Conservation scientist Chia-Hsuan Hsu, pictured on the left, works at night with two researchers to measure the body size of a red-clawed crab (Chiromantes haematocheir) in Taiwan. Hsu is working with local people to create rocky microhabitats and artificial wetlands to counter some of the effects of habitat loss. “An old man from the local community told me that years ago, during the breeding season, you could barely cross the road because of all the crabs,” says Hsu. “Small organisms need our help — they can’t stand up for themselves.” (Nature | 3 min read)

Christine Ye, a 17-year old secondary-school student, has won a prestigious US$250,000 prize for her research showing that a mysterious gravitational-wave source could have been a rapidly spinning neutron star. (Geekwire | 6 min read)