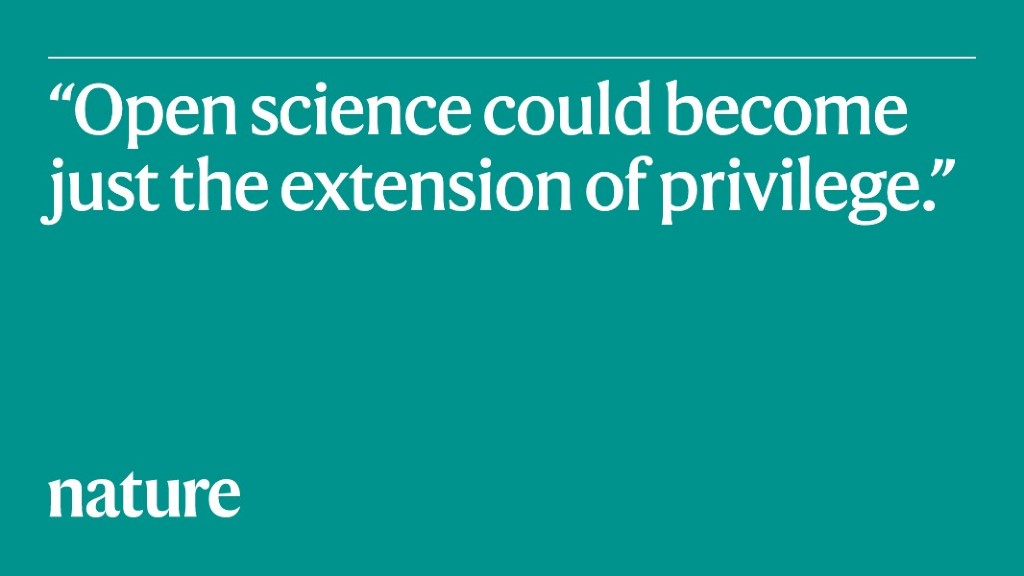 Ten years ago, as a new PhD graduate looking for my next position, I found myself in the academic cold. Nothing says “you are an outsider” more than a paywall asking US$38 for one article. That fuelled my advocacy of open science and, ultimately, drove me to research its implementation.

Now, open science is mainstream, increasingly embedded in policies and expected in practice. But the ways in which it is being implemented can have unintended consequences, and these must not be ignored.

Since 2019, I’ve led ON-MERRIT, a project funded by the European Commission that uses a mixture of computational and qualitative methods to investigate how open science affects the research system. Many in the movement declare equity as a goal, but reality is not always on track for that. Indeed, I fear that without more critical thought, open science could become just the extension of privilege. Our recommendations for what to consider are out this week (see go.nature.com/3kypbj8).

Open science is a vague mix of ideals. Overall, advocates aim to increase transparency, accountability, equity and collaboration in knowledge production by increasing access to research results, articles, methods and tools. This means that data and protocols should be freely shared in high-quality repositories and research articles should be available without subscriptions or reading fees.

Making all that happen is expensive. Wealthy institutions and regions can afford this better than can poorer ones. At my university, in a high-income nation, I know I am privileged. In a collaboration to introduce open science at Ukrainian universities (including those displaced by conflict post-2014), I’ve been privy to difficult conversations about how to pay publication fees that are three times a professor’s monthly salary, and how to meet data-sharing requirements to be eligible for funding when institutional support is lacking. And privilege comes in many forms. For instance, the fact that career-advancement criteria don’t reward open practices puts early-career adherents at a disadvantage.

Failing to address structural inequalities directly means that the advantages of those who are already privileged will grow, especially given that they have the most influence over how open science is implemented.

A particularly pressing issue is open access (OA) publication fees, in which the benefit of free readership is being offset by new barriers to authorship. To support OA publishing, journals commonly charge authors, and charges are rising as the practice expands. My group and others have found that article-processing charges are creating a two-tier system, in which richer research teams publish more OA articles in the most prestigious journals. One analysis of 37,000 articles in hybrid ‘parent’ journals and their fully OA ‘mirrors’ (with the same editorial board and acceptance standards) found that the geographic diversity of authors was much greater for non-OA articles than for OA articles (A. C. Smith et al. Quant. Sci. Stud. 2, 1123–1143; 2022). Another analysis found that authors of OA articles were more likely to be male, senior, federally funded and working at prestigious universities (A. J. Olejniczak and M. J. Wilson Quant. Sci. Stud. 1, 1429–1450; 2020). Worse still, citation advantages linked to OA mean that the academically rich will get even richer.

That open science can increase inequity should alarm science reformers. At the very least, they should commit to monitoring how researchers are affected.

To be sure, equity is not the sole priority for many advocates. When my team first announced its project, some critics objected. They argued that the key aims of open science are to improve research integrity by making processes and products more amenable to inspection, and boosting efficiency by making others’ work reusable. Still, as our work has shown, equity is often cited as a key aim (T. Ross-Hellauer et al. R. Soc. Open Sci. 9, 211032; 2022).

Even those rooting for equity often argue that we should first enable access and then consider unintended side effects, such as marginalization of authors from low-income countries. But how change is implemented will have long-lasting consequences. Once new forms of inequity are in place, it will be too late to fix the system efficiently.

How can we ensure that open knowledge creation becomes fairer than it is now? First, we need more shared understanding and global dialogue. Open science is an umbrella term for a coalition of diverse practices with sometimes conflicting aims of transparency, participation and equity. We desperately need to untangle these.

Second, reform should encompass the research system as a whole, rather than country- or region-based policies that target specific practices. The UNESCO Recommendation on Open Science is an example of how this can work. Our recommendations include more focus on shared infrastructure, as well as on who participates and how. That means discussing ways to have open access without publishing fees, plus making open practices easier, cheaper and more valued by promotion and grant evaluators.

I do think that open science can bring much good. Like many of its advocates, I aim to make research more accessible and collaborative and to establish a system that rewards current merit, not past success or current privilege. Any potential for open science to compound inequalities must be vigilantly monitored by the academic community — otherwise we idealists risk scoring an own goal.