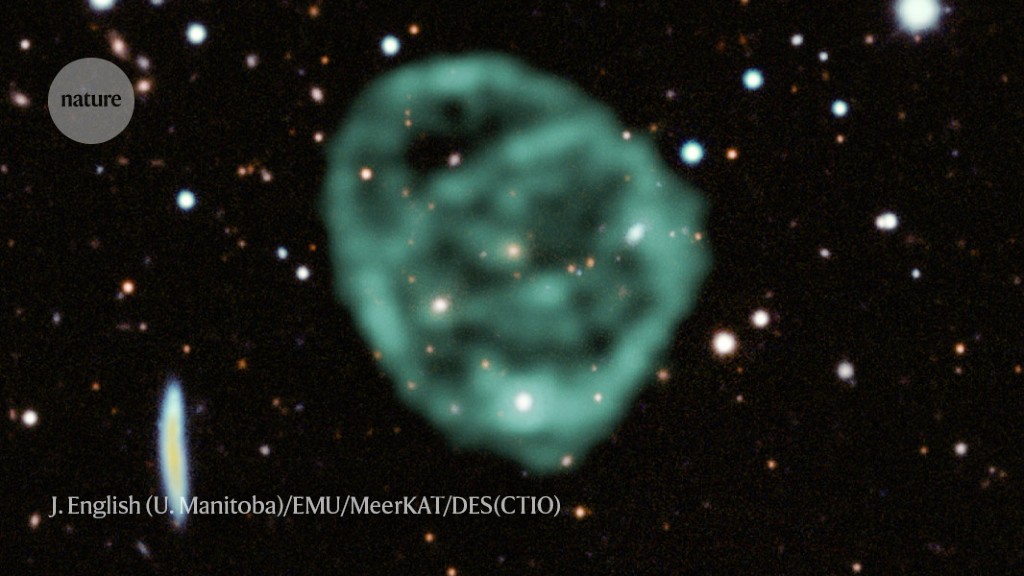 Astronomers have captured a close-up image of a rare and mysterious space object, prompting a renewed push to understand its origin. Odd radio circles (ORCs) are gigantic rings of radio waves. Only five have been sighted, and such spectacular detail is unequalled.

The image of ORC J2103-6200, also called ORC1, was captured by the high-resolution MeerKAT radio telescope in South Africa, which has given researchers unprecedented information about these rare phenomena (R. P. Norris et al. Preprint at https://arxiv.org/abs/2203.10669; 2022).

“This discovery will start new scientific research among astronomers,” says Alice Pasetto, a radio astronomer at the National Autonomous University of Mexico in Mexico City.

The MeerKAT radio data show that the ORC’s large outer circle could be more than 300,000 parsecs (one million light years) across — ten times the diameter of the Milky Way — with a series of smaller rings inside.

Researchers have proposed several theories to explain the origin of ORCs. These include that the objects are created by a shock wave from the centre of a galaxy, similar to what happens when two supermassive black holes merge. Another theory is that ORCs are shells caused by starbursts in the centre of a galaxy.

Data gaps could slow hunt for next COVID variant

Many countries sequencing SARS-CoV-2 genomes are sharing only a fraction of them in public repositories — and many sequences lack important information, according to a global analysis of genomic surveillance.

Researchers are concerned that data gaps could make it harder to spot the next COVID‑19 variant of concern, and could frustrate efforts to respond to it quickly.

The authors of the analysis collected genomic data uploaded to public repositories including GISAID between the beginning of the pandemic and 31 October 2021 — comprising roughly 4.9 million genomes from 169 countries (Z. Chen et al. Nature Genet. https://doi.org/hn3x; 2022).

They compared the sequences with official reports from individual countries and found that of 62 countries that report such data, 23 — more than one-third — had uploaded fewer than 50% of their sequences from the variants of concern Alpha, Beta, Gamma and Delta (see ‘Hidden variants’).

Antibodies work better against COVID when given earlier

A first-of-its-kind analysis has a clear message about when to give the COVID-19 therapies called monoclonal antibodies: the earlier, the better (E. Stadler et al. Preprint at medRxiv https://doi.org/hn9s; 2022). The study has not yet been peer reviewed.

Monoclonal antibodies are synthetic versions of natural immune molecules that can prevent pathogens from infecting cells. They are among the few successful treatments for COVID-19.

To investigate the best timing and dose of these therapies, scientists at the University of New South Wales in Sydney, Australia, and elsewhere analysed data from an array of randomized controlled trials. They found that early treatment could reduce the risk of hospitalization by around 70%. They also determined that doses of antibody drugs 7 to 1,000 times lower than typically administered could still achieve nearly the same efficacy.

This finding could have far-reaching implications, given monoclonal antibodies’ extraordinarily high cost and their ability to keep people with COVID-19 out of hospital.