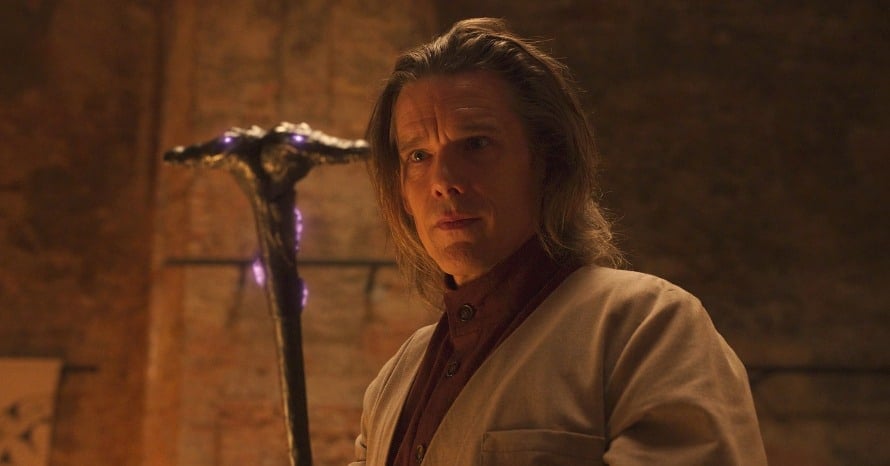 Ethan Hawke signed on for his Moon Knight role without reading any scripts for the series.

Marvel Studios’ newest series Moon Knight brings in two of the most respected actors in Hollywood as the titular protagonist and primary antagonist: Oscar Isaac and Ethan Hawke, respectively. While Isaac has had some experience in the big franchise scene thanks to his role as Poe Dameron in the Star Wars Sequel Trilogy as well as his role as the titular antagonist in X-Men: Apocalypse, Hawke has had very little experiences in a big franchise, even criticizing the comic book genre in general.

However, Ethan Hawke now plays Moon Knight antagonist Arthur Harrow, a charismatic cult leader. Despite his criticisms of the comic book movie genre in the past, he found himself drawn to the concept of the stories, even agreeing to join the cast without reading any scripts beforehand. The actor recently appeared at the official press conference for the series, where head director Mohamed Diab revealed that the actor signed on for the reason mentioned above, and explained that Oscar Isaac even approached him about joining the cast. Hawke explained the collaborative relationship he had with the team throughout the series’ production:

“In my whole experience, usually when there’s a huge budget, there’s a tremendous amount of fear, and the people in charge are incredibly controlling, and creativity is reduced. In my entire experience with you [executive producer] Grant [Curtis], and with Marvel, it’s the opposite of that. You guys have translated your success into confidence. ‘Yes, we are going to cook in your kitchen, but if we stay in the kitchen, we can do what we want.’ There was a lot of playfulness, and a lot of willingness to fail, and a lot of willingness to have bad ideas. Because you can’t find a great idea if we don’t say some dumb ones and make mistakes.

I sensed it with Oscar from the get-go… There was a huge passion to contribute, and when an actor has a strong hit on a character, when they have something they want to contribute and you follow it, good things happen… And that’s what collaboration is. You guys were so willing to have that happen. That’s what you guys told me would happen, but sometimes what people tell you… that’s why you don’t sign on without reading a script, but I’m really glad I did because it’s better because of the way it evolved.”

Ethan Hawke praising the collaboration with an entertainment giant like Marvel Studios on Moon Knight is interesting given that he is notable for his acclaimed work in the independent film scene. He has been nominated for two Academy Awards for Best Supporting Actor for his performances in both Training Day and Boyhood respectively. He also has two Academy Award nominations for his contributions as a writer to the scripts for Before Sunset and Before Midnight, which he co-wrote with director Richard Linklater and co-star Julie Delpy, an actress who also made an appearance in the MCU as Madame B. in Avengers: Age of Ultron.

Starring Oscar Isaac, Ethan Hawke, Gaspard Ulliel, and May Calamawy, Moon Knight is set to make its Disney Plus debut on March 30th.

Stay tuned for all the latest news surrounding Moon Knight, as well as Ethan Hawke’s role as Arthur Harrow, and be sure to subscribe to our YouTube channel for more content!