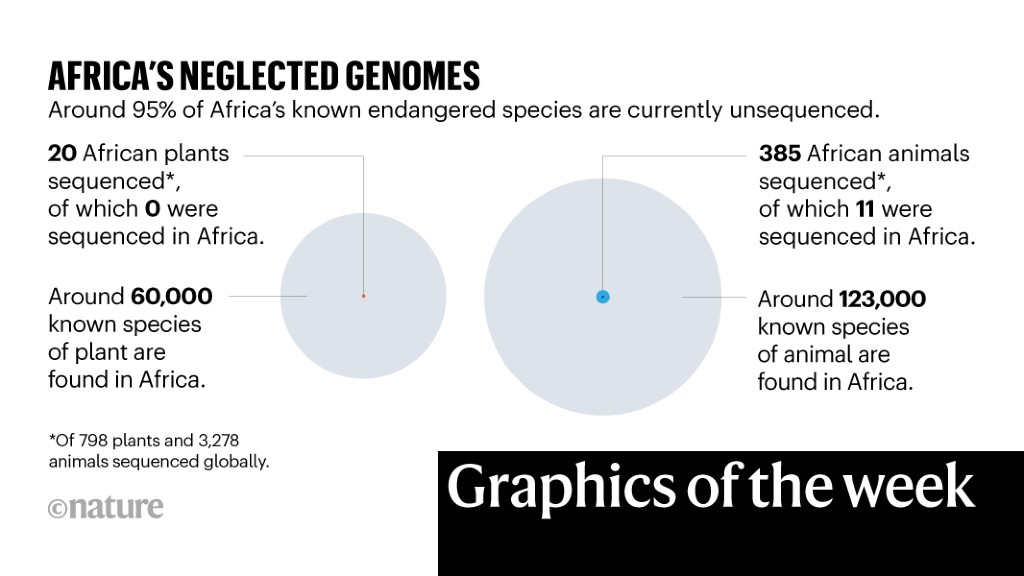 This graphic starkly illustrates how thousands of African species have been ignored by the global genomics community. The genomes of 95% of the continent’s known endangered species have not been sequenced, an inequality that a group of academics argue should be corrected.

What’s more, the authors estimate, around 70% of the 35 or so projects that have focused on studying, conserving or improving biological diversity in Africa over the past 15 years have been led from outside the continent. The academics call for more support for the African BioGenome Project, an effort to sequence the genomes of 105,000 endemic species, to inform biodiversity conservation and help plant and animal breeders to improve food systems.

In future, sensors and electronics woven into clothes could usefully track our health or connect with computers. This idea might become a reality with fabrics woven from piezoelectric fibres, which generate electricity in response to mechanical stress. A Nature paper this week reported an innovative approach to making hybrid piezoelectric fibres that can act as flexible acoustic sensors.

The sensors are made up of barium titanate nanoparticles embedded in a polymer matrix, which is sandwiched between two electrodes. a, The material has high piezoelectricity, which the authors attributed to pores that form next to the nanoparticles during an elongation process known as thermal drawing (forces shown as black arrows). These pores induce electrically polarized domains (dipoles) in a subsequent process called poling. The increased number of dipoles improves the output of the electric charges that are formed through sound vibrations. b, Because the sensors are made from flexible polymers, they can be formed into fibres, which can be woven into fabric. Our podcast discusses how this ‘fabric microphone’ is capable of detecting human speech and heartbeats.

Our final graphic shows results from a small study that found that children infected with SARS-CoV-2 are less likely than adults to produce antibodies against the virus, despite having similar symptoms and levels of virus in their bodies.

The researchers took nose and throat swabs to measure participants’ levels of viral RNA, and blood samples to check for immunoglobulin G antibodies against the virus. They found that children and adults had similar viral loads, but only 37% of the children produced SARS-CoV-2 antibodies, compared with 76% of the adults. Researchers say the findings add to the growing body of evidence suggesting that children have a more robust initial immune response to COVID-19 than do adults, and can clear the infection quickly.