making a home for red-clawed crustaceans in Taiwan 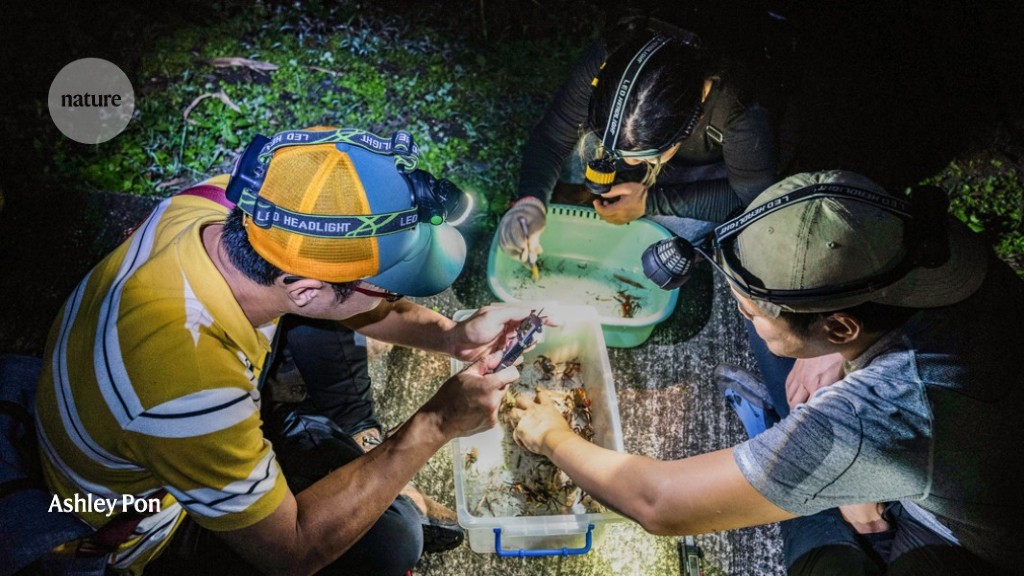 This picture was taken at night in the coastal community of Dakenggu in Yilan County, which is just southeast of Taipei in Taiwan. I’m on the left, working with two other researchers to measure the body size of a red-clawed crab (Chiromantes haematocheir).

An old man from the local community told me that years ago, during the breeding season, you could barely cross the road because of all the crabs. He said nobody knows where they all went. They’re an important memory for the local people, and part of the culture here.

Habitat loss — especially resulting from the widespread use of concrete — seems to be driving the decline. I’m working with local people to create rocky microhabitats and artificial wetlands for the red-clawed crabs to live in. They’re important scavengers — eating dead animals and other organic matter, breaking it down and playing a key part in the nutrient cycle.

Small organisms need our help — they can’t stand up for themselves. But in Taiwan, a lot of people think a coastal villa is more important than a few crabs. Corporations want to build luxury developments in our national parks, and authorities often approve them. I’ve seen so many intact habitats destroyed or covered in concrete.

Crabs caught my interest because they were frequent visitors to my dormitory. National Sun Yat-sen University in Kaohsiung sits in a coastal buffer zone between a mountain and the ocean, and land hermit crabs (Coenobita cavipes) have to scurry through it on their way to breed.

After watching habitat after habitat destroyed by overdevelopment, I’ve realized that just doing the science is not enough. It doesn’t matter how many papers you publish: you need to connect with people through education and communication. That’s why I decided to do my PhD in social science. And it’s why I believe conservation will be my life’s work.