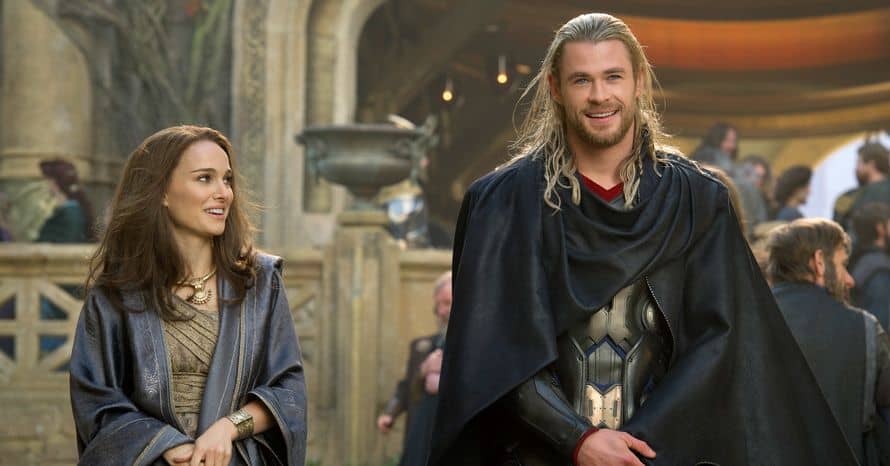 New promotional material for Thor: Love and Thunder offers a look at Natalie Portman’s incarnation of the thunder god, as well as her rebuilt hammer, Mjolnir.

Thor: Love and Thunder hits theaters this July and will see Chris Hemsworth sharing the mantle of Thor with Natalie Portman, who will be returning as Jane Foster. Inspired by a recent storyline in the Marvel comics, the film will see Jane wielding Mjolnir to become Thor herself. Unlike in the comics, however, the MCU’s version of Mjolnir was destroyed in 2017’s Thor: Ragnarok, which gives Love and Thunder the task of restoring the hammer so that Jane Foster can take on her heroic form.

New images of tie-in cups and popcorn buckets being sold in theaters have revealed a look at new promotional artwork for the film. As well as showing Natalie Portman’s Thor alongside Chris Hemsworth’s, the artwork offers a look at Mjolnir. The hammer is shown still riddled with cracks from where it was shattered by Cate Blanchett’s Hela, the Goddess of Death, in Ragnarok. The glow of Thor’s lightning can be seen shining through the cracks of the reassembled hammer, which Portman’s Thor will wield while Hemsworth’s continues to use his axe, Stormbreaker, which was introduced in Avengers: Infinity War. Check out the new images below:

After seeing Mjolnir destroyed in Ragnarok and Thor start looking for a new direction in life in Avengers: Endgame, Thor: Love and Thunder will have many questions to answer before its two Thors can fight side-by-side.

Here’s the synopsis for the previous film in the franchise, Thor: Ragnarok:

In Marvel Studios’ Thor: Ragnarok, Thor is imprisoned on the other side of the universe without his mighty hammer and finds himself in a race against time to get back to Asgard to stop Ragnarok – the destruction of his home world and the end of Asgardian civilization at the hands of an all-powerful new threat, the ruthless Hela. But first he must survive a deadly gladiatorial contest that pits him against his former ally and fellow Avenger – the Incredible Hulk!

Thor: Ragnarok is available on Digital HD, 4K Ultra HD, Blu-ray, and DVD. Meanwhile, Thor: Love and Thunder will hit theaters on July 8, 2022. Stay tuned for all the latest news regarding the Marvel Cinematic Universe, Taikia Waititi’s upcoming projects, and be sure to subscribe to Heroic Hollywood’s YouTube channel for more great video content!