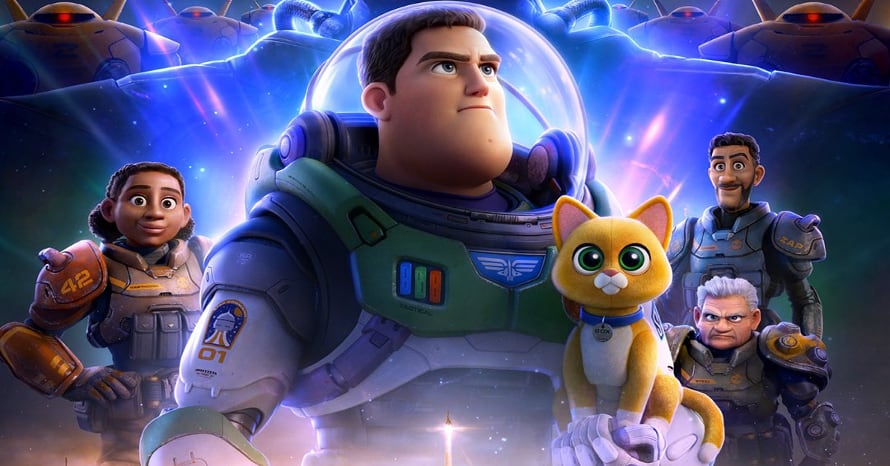 Buzz Lightyear is back. He’s just not the toy that audiences may remember. Pixar’s Lightyear, directed by Angus MacLane, is supposed to be one of Andy from Toy Story’s favorite films, and given the exciting action and incredible animation it’s easy to see why. While it’s no Toy Story 2, Lightyear is an emotionally-charged, character-driven film that will keep viewers entertained throughout as the titular protagonist embarks on an epic and action-packed sci-fi adventure.

While out on a mission with his fellow Space Command rangers, Buzz’s bravado results in an accident that leaves him and hundreds of others stranded on a strange planet. Solely focused on fixing his mistakes, Buzz obsessively embarks on a number of test flights with the goal of being able to achieve hyperspeed and getting everyone out of there. Unfortunately for Buzz, each test flight around the sun results in him missing four years worth of time on his new home planet, and as he desperately moves forward with each attempt he is choosing to forfeit time with friends and loved ones. After one last attempt to achieve hyperspeed, Buzz returns to a planet under duress and is quickly thrust into the action. Alongside a few Junior Patrol members who are still very much so in training, Buzz and his team have to stop the evil Zurg and figure out a way to save all of the trapped Space Commanders before it’s too late.

I’ll delve a bit deeper into Lightyear’s themes in a different paragraph, but I want to say that the movie deserves a lot of credit for the emotional state it often leaves Buzz in. For most of Lightyear, Buzz is desperately trying to fix his mistake and it’s clear that his actions weigh on him every day. There’s a real sense of trauma and self-defeat hanging around Buzz, and that only makes his triumphant moments feel all that more earned because the audience has seen just how much emotional labor Buzz has put into making things right again. Thanks in part to Chris Evans’ fantastic vocal performance, Buzz feels like a fully fleshed out character who shifts from bragodicious behavior (like narrating his own adventures for no reason) to deeply introspective reflection without missing a beat.

At this point it almost feels redundant to heap so much praise onto Pixar’s amazing animation team, but Lightyear is GORGEOUS. Every Pixar film takes an entire team of dedicated animators, lighting technicians and character designers to bring everything to life, but first-time director Angus Maclane — who has been a Pixar animator since A Bug’s Life — deserves a massive amount of praise for the way he brings all of these technical elements together. Everything from the incredibly detailed character rigs to the colorful hyperspeed sequences jump off the screen and pop in a way that not many other animated movies can compete with.

In addition to beautiful environments, the animation team really knocked it out of the park with their expressive characters. Buzz is obviously the star of the show, but he’s got a small crew around him who help throughout his journey and each one of them have small character arcs. Each Junior Ranger gets a moment to shine, but the co-star of the movie is absolutely Keke Palmer’s Izzy Hawthorne. The granddaughter of Buzz’s former best-friend and commander, Izzy aspires to be a member of Star Command and is dedicated to figuring out how to save everyone from Zurg’s droids. Like Buzz, she has her own fears to overcome and Lightyear gives Izzy the time to undergo her own journey of self-discovery. In terms of stand out characters, Sox (Peter Sohn) — the robot cat who travels with Buzz — generated most of the laughs in the screening I went to. Fast forward to this holiday season and there’s no way Sox toys and blankets aren’t everywhere because the crafty cat truly steals the show.

The whole voice cast does a great job, but it is worth singling out Chris Evans’ performance for a moment. Taking over voice duties on an iconic character like Buzz Lightyear takes guts and Evans pulls off the role perfectly. Rather than turn in a Tim Allen impression, Evans breathes new life into the character as we see Buzz undergo periods of self-doubt and push himself to his absolute limits to save the day. Silly moments of Buzz talking to himself or heroic scenes where he confronts Zurg will likely be the highlight for younger viewers, but Evans does a great job in the quiet moments as well when the movie establishes the character as someone trying to confront their own mistakes.

Like a lot of Pixar movies, Lightyear’s larger-than-life concept is just an excuse to tell an emotionally driven story. The story dwells on trauma and feelings of inadequacy quite a lot and it gives Buzz the room to reflect upon his actions and change his behavior. Sure, there’s a bad guy who the protagonist and his crew need to take out to save the day, but the film’s really all about building the confidence to look inward and confront one’s own demons rather than figuring out a way to stop some generic villain. Unfortunately, despite how emotionally charged Lightyear is, composer Michael Giacchino doesn’t quite deliver anything that lives up to the emotional stakes of the movie. The Toy Story films obviously set a high bar on the music side of things, but it would have been nice for Lightyear’s score to live up to the high emotional-stakes of the movie.

Buzz’s origin story from Toy Story 2 was always inspired by Star Wars, but there’s something incredibly on the nose about the amount of sci-fi referencing going on in Lightyear. Everything from the reddish tint inside Zerg’s ship to the droid army noises made me think about Star Wars and almost took me out of the moment. I know that Lightyear is supposed to be a movie from the 1990s, and a whole lot of science-fiction movies were clearly influenced by the success of Star Wars at the time, but leaning so heavily on Star Wars doesn’t actually add any value to this movie; it just feels a bit corporate and overly synergistic.

Overall, Lightyear is entertaining and definitely worth watching for any fans of excellent animation or sci-fi adventures, but I’m curious where it’ll land among Pixar’s filmography after audiences reflect on it for a little bit. The trippy colors and silly moments with Sox remind me of peak Pixar, but a lot of the story also feels jumbled and forgettable in a way that any generic ’90s action movie does. Maybe that makes Lightyear a success as the team absolutely nails the genre it was emulating, but it also results in a movie that I’m worried will be quickly digested and forgotten by most general audience members. Either way, thanks to Disney Plus, Lightyear will live on forever and subsequent generations of kids will get to learn about the infamous Buzz Lightyear and how he overcame his own emotional barriers to save the galaxy.