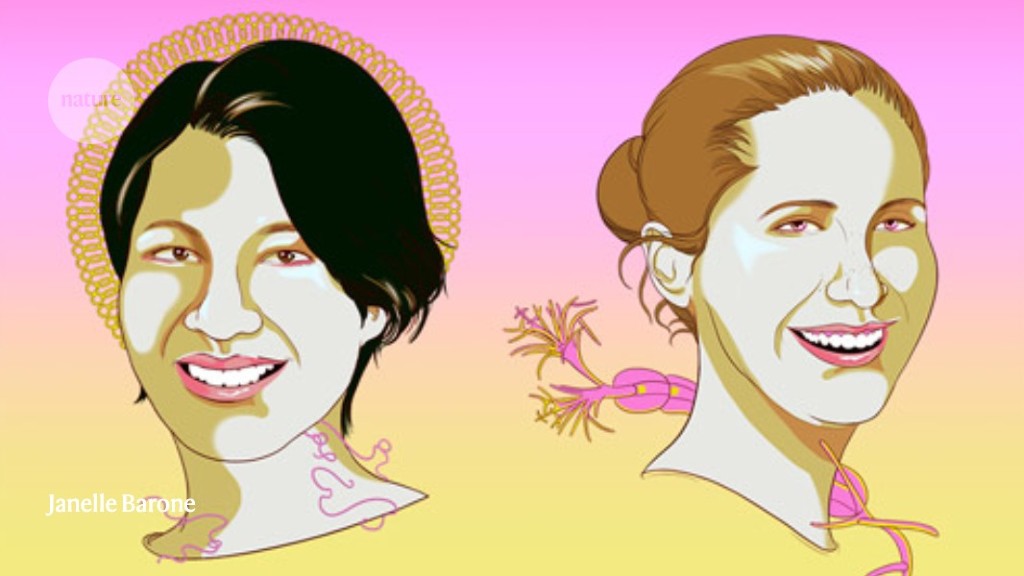 Five researchers, each based in one of the five leading countries in the Nature Index, speak about the impact they’re having on their field — whether it’s working towards greater inclusivity, forging new collaborative ties or challenging old assumptions.

The process that forms giant planets, such as Jupiter and Saturn, is one of the longest-standing mysteries in planetary science. Understanding this, and how it influences the formation of smaller, more Earth-like planets, can inform the search for life elsewhere in the Universe, says Olja Panić, an astrophysicist at the University of Leeds, UK.

Panić is particularly interested in protoplanetary disks — rings of gas and dust that encircle young stars and are thought to seed the formation of giant planets.

In 2018, with teams at the University of Cambridge and the University of Warwick, UK, she gave a detailed description of ‘hybrid disks’, rings that are in the intermediate period between the gas-dominated early phases and fully formed planets1. “Our data revealed an unusual and irregular distribution of material in a disk that is witnessing the rare transition phase from planet formation to an evolved planetary system,” says Panić. She and her colleagues recently identified more than a dozen hybrid disks using the European Observatory’s Very Large Telescope, in Chile.

Panić says she fell into astronomy, almost by chance. When she applied for her undergraduate degree at the University of Bologna, Italy, in the early 2000s, it was an opportunity to leave her home country of Bosnia, in the aftermath of the war in the 1990s.

“I looked at what I could study in neighbouring Italy,” she recalls. “Astronomy was first on the alphabetically ordered list. It had never crossed my mind that someone could actually be an astronomer.”

Panić’s unusual path to astronomy compels her to make the field more accessible. Collaborating with sign-language experts, including a deaf physicist and an amateur deaf astronomer, Panić and her students have developed new signs to convey the meanings of 60 astronomical concepts, such as ‘protoplanetary disk’ and ‘astrobiology’. A glossary will soon be made available online. “It enriches the scientific community because people who surmount challenges bring a different perspective to problem solving,” says Panić. “Other scientific fields would greatly benefit in doing something similar to become more inclusive.” — by Benjamin Plackett

The image of a lotus flower emerging unstained from muddy water has intrigued Chinese philosophers for centuries. For physical chemist Lei Jiang, the properties of extremely water-repellent (or superhydrophobic) plants offer a blueprint for designing ‘superwettable’ materials and devices that can attract or repel liquids. Scientists attribute these self-cleaning characteristics to the millions of nanostructures that cover the leaves and petals of lotus plants and similar species. Upon contact, water droplets transform into perfect spheres, which capture particles of dirt and dust as they roll away.

Jiang has spent two decades studying natural materials, such as spider silk, fish scales, butterfly wings and cactus spines, to discover the diverse nanostructures behind their extreme attraction or repulsion of water. “We start by learning from nature,” says Jiang, who is based at the Chinese Academy of Sciences’ Technical Institute of Physics and Chemistry in Beijing.

In 2020, Jiang and his colleagues designed a 3D-printed water-harvesting device that mimics the curved shape and slippery surface of a pitcher plant. The device collected around 40 millilitres of water from fog in 2 hours at room temperature, according to the researchers, who say it could inform scaled-up versions for use in chemical production, laboratory settings or kitchens2.

Jiang’s nanomaterials research has helped him to secure more than 70 patents, registered in China and abroad, for inventions such as anti-fogging glass and devices that can remove pollutants from water. In the Nature Index, which tracks articles in 82 selected natural-sciences journals, he is among the most prolific authors in China, for the period 2015–20.

Jiang is now focused on creating smart materials that can switch between opposite wettability states under different conditions. — Gemma Conroy

Maria Spiropulu has spent much of her career trying to elucidate the properties of dark matter and the Higgs boson particle. Her latest ambition is to build a more advanced, hack-proof Internet. By harnessing the laws of quantum mechanics, she hopes to create a network that offers unprecedented levels of privacy, security and computational horsepower.

A major challenge is to reliably teleport qubits — the basic units of information in quantum systems — from one device to another over vast distances. Teleportation relies on entanglement to shuttle information through a network, wherein particles can remain in a linked quantum state, regardless of the physical distance between them. “The physics works, but we have to make the engineering work,” says Spiropulu, who is the Shang-Yi Ch’en Professor of Physics at the California Institute of Technology in Pasadena, and one of the leading US-based authors in the Nature Index, based on article count for 2015–20.

In 2020, Spiropulu led a team that teleported qubits across a 44-kilometre fibre-optic network using advanced photon detectors and off-the-shelf optics. Information was transferred with a data accuracy of more than 90%3. “Every moment we progress, we are on the cusp of something almost fantastical,” says Spiropulu.

The discovery is among the achievements of the Alliance for Quantum Technologies (AQT), a consortium established by Spiropulu in 2017 to facilitate collaborations between academic institutions, national laboratories and industry. Its research programme focuses on accelerating the development of quantum technologies and answering questions in fundamental physics, such as the quantum nature of space-time and gravity.

Spiropulu says AQT’s collaborative focus was inspired by her time at the European Organization for Nuclear Research (CERN) near Geneva, Switzerland, more than a decade ago, where she worked with teams of thousands of researchers to develop pioneering methods to search for new physics. “We could not have [discovered Higgs] if we didn’t have this kind of lateral, global approach and teamwork,” she says. — by Gemma Conroy

During her undergraduate degree at the Tokyo University of Science, Ayuko Hoshino set her sights on finding new ways to thwart cancer. Her friend had been diagnosed with osteosarcoma, the most common type of cancer that starts in the bones. Her friend recovered, but the experience stayed with Hoshino. “I wanted to know what was driving the cancer and how to improve medicine to prevent it,” she says.

Now a molecular biologist at the Tokyo Institute of Technology, Hoshino studies exosomes, minute vesicles that are secreted by almost every type of cell in the human body. In a 2015 study, she and her colleagues demonstrated how exosomes can influence the spread of cancer. They extracted exosomes from cultured human breast cancer cells that had metastasized to the lungs. When these exosomes were injected into healthy mice, they once again found their way to the lungs. The experiment showed how exosomes can fuse with a target organ to prepare it for the arrival of metastatic cancer cells4. “Exosomes produced by cancer cells are a determination of where cancer spreads,” says Hoshino.

The finding could change the way that cancer is treated, she says. “At the moment, we wait until a cancer has arrived in an organ to treat it, but I’m proposing that we could start before it gets there.”

By detecting and examining exosomes in blood tests, says Hoshino, doctors could forecast where a cancer will go next and pre-emptively start treatment. She is now seeking industry partnerships to develop new testing devices based on her research.

In 2020, the Japan Science and Technology Agency presented Hoshino with its Award for a Brilliant Female Researcher, along with Nami Sakai, chief scientist at RIKEN’s Star and Planet Formation Laboratory in Saitama, Japan, who is noted for her interdisciplinary approach to astronomy, using chemical methods to elucidate the formation of planetary systems. The award, launched in 2019, aims to highlight the work of female scientists, which Hoshino says is greatly needed. When she set up her Tokyo-based lab in 2020, at the age of 37, Hoshino says there were no other women in a similar leadership position.

“As a principal investigator at my age, I’m something of a pioneer,” she says. “I think it shows that Japan is trying to change.” — by Benjamin Plackett

Whether it’s a first kiss or the loss of a loved one, each experience leaves a mark on the brain. These neuronal traces, or engrams, are the physical basis of memories. Although the concept of engrams was established more than a century ago, understanding how they take root and develop in the brain has remained elusive.

At the University of Freiburg in Germany, Monika Schönauer and her lab group are studying memory formation using magnetic resonance imaging and machine-learning methods. Schönauer is particularly interested in how sleep, retrieval and repeated practice can solidify newly formed memories over the long term.

“The ability to remember experiences, facts or skills is really important for us to navigate our lives,” she says. “I’m looking at the things that help us form more stable memories.”

Whereas practising a skill can help to strengthen fresh memories, sleep makes them stand the test of time, Schönauer found in a separate experiment. Participants who had an eight-hour sleep after studying a list of words, for example, formed stable memory traces in the neocortex. Participants who remained awake after the first learning session relied more on the hippocampus to recall the words they had learnt, indicating that new memory traces had not yet taken hold in the neocortex6.

In 2021, Schönauer was one of 10 winners of the Heinz Maier-Leibnitz Prize, the most prestigious award for early-career researchers in Germany, worth €20,000 (US$22,857) each. Among the other recipients was Kai Lawonn, a mathematician from the University of Jena, who studies data visualization in fields such as medicine, chemistry and heritage conservation, and Silvia Budday from the University Erlangen-Nuremberg in Erlangen, who works in the emerging field of continuum biomechanics, which investigates phenomena such as how blood behaves as both a solid and fluid.

Schönauer now plans to investigate how the memory-consolidation process is altered in patients with psychiatric conditions, such as post-traumatic stress disorder, anxiety and depression. “That’s going to be really informative,” she says. — by Gemma Conroy