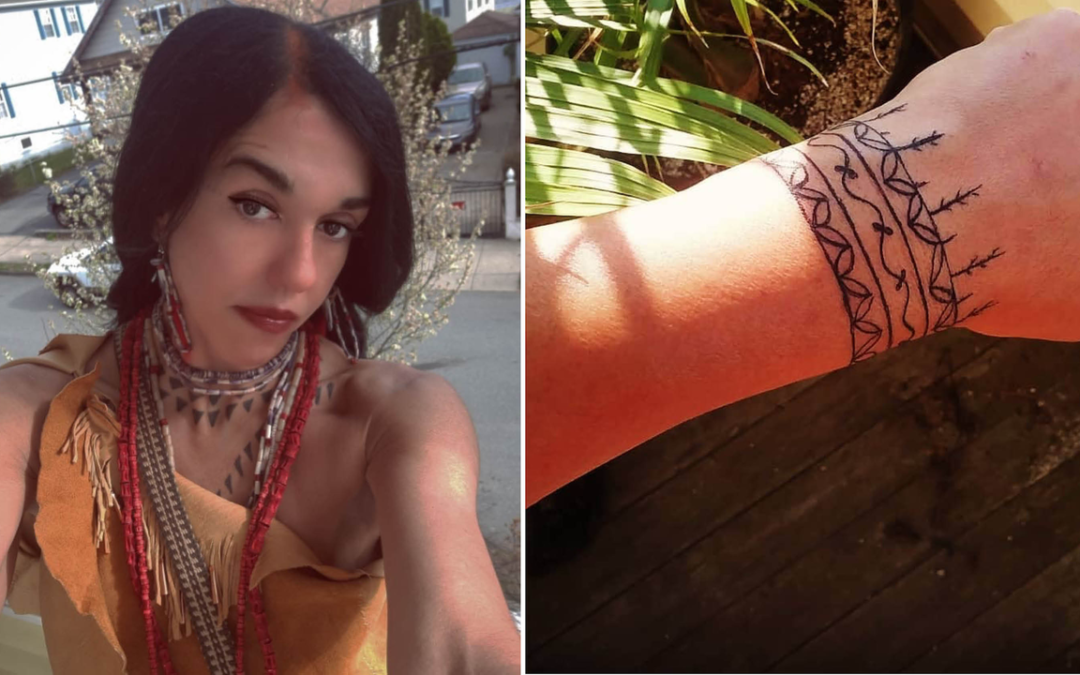 Kerri Helme‘s tattoos go far deeper than the layers of flesh a pigment-spiked needle made from turkey bone can pierce. Rows of triangles adorn her neckline. Tiny dots stretch from either corner of her eyes, sprinkling over her nose bridge. Sure, they’re aesthetic. But they’re also part of a tradition cultivated over generations by the people whose blood runs through her veins.

Helme is a member of the Mashpee Wampanoag Tribe, living in New Bedford, Massachusetts, on the land of her ancestors. The cultural traditions of her tribal community were a key part of her upbringing, during which she attended powwows, ceremonies, and other social events. As she grew older, the importance of preserving these centuries-old customs and educating other Indigenous Americans about them became more than a passion — it is what drives her. Early on in her career, Helme worked as a Native American cultural interpreter and curator at Plimoth Patuxet Museums in Plymouth, Massachusetts. Today, she is a cultural instructor for the Mashantucket Pequot Tribal Nation, further spreading knowledge of these ancient customs, focusing on songs, dances, crafts, and making tribal regalia. She also oversees the royal members of the tribe, including helping the Mashantucket Pequot princess with ceremonies and other duties.

Traditional Native tattooing is another brick in the foundation of preserving these practices. The people she passes this knowledge on to breathe new life into it and demonstrate that those communities Indigenous to what is now the United States have a history and culture that is very much alive and thriving today. Her work flies in the face of the belief that Native customs faded out after centuries of brutality inflicted upon the community by the European colonizers who came here and the government they eventually put in place.

Helme speaks with Allure about her work teaching Native women the tattooing traditions of their predecessors, and how, armed with this knowledge, her people can evolve and build the future of the Indigenous community in the U.S.

For 19 years, I worked at Plymouth Plantation, which is now called Plimoth Patuxet. I was an interpreter, curator, and women’s technical advisor, where I taught other women to do things like process natural materials, harvest, weave, and make pottery. I was also a foodways manager, the person in charge of traditional recipes and the research that goes into what we were eating, why we were eating it, and at which times of the year [we were eating certain foods]. I wore a lot of hats at Plymouth Plantation, and we did a lot of experimental archeology there, too. It’s a living history museum, so we wanted the Wampanoag (Wôpanâak) homesite to be as authentic as possible. I can’t say that we were the first to try to revive traditional tattooing in this region over the last couple of hundred years, but it was us, the women, who decided to figure out exactly how our ancestors were doing it.

We were initially motivated by our love for some of the traditional tattoos we’d seen in illustrations from the 15th, 16th, and 17th centuries. We saw a lot of these tattoos in the John White illustrations and enjoyed learning about why people got tattoos during those periods. Sometimes, the ink represented a dream they had. Other times, they would tattoo their family members to show other communities what clan they belong to, or to signal that they’re in a courting stage of their lives, looking for a husband or wife. These tattoos might have a spiritual significance to some, or they might just be decorative. People got tattoos back then for the same reasons they got them now — [to] show a little bit of what’s inside, on your outside.