How to challenge weight bias in the scientific workplace 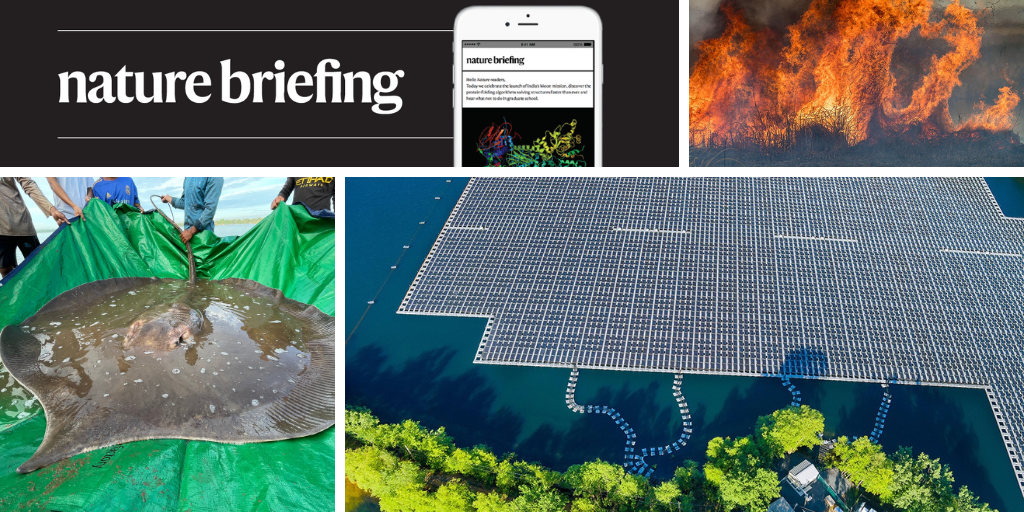 Stunned fishers came face to face with this giant freshwater stingray after accidentally hauling it up from the murky depths of the Mekong River in Cambodia. The 4-metre-long Urogymnus polylepis was captured after it swallowed a smaller fish on a baited hook. After being measured and weighed by a rescue team, the ray was released unharmed back into the river. “It shows you nature is so beautiful, but also resilient,” says limnologist Sudeep Chandra. “Even with the major environmental problems in the Lower Mekong, like dams, forest change and overfishing, these large, charismatic species are still there, wanting to persist.” (The New York Times | 4 min read)

A 3,000-year history of a large fire-prone forest in California has been reconstructed with the help of traditional ecological knowledge shared by members of the Karuk, Yurok and Hoopa Valley Tribes. And by analysing sediment cores from lakes, researchers inferred tree density and the amount of fire in the area at various times. Combined, the evidence shows how cultural burning — small, controlled fires that keep biomass low and reduce the risk of more widespread burning — promoted stability in the forests of the Klamath Mountains for at least 1,000 years. With those land-management practices curtailed by settler colonialism, the tree density in parts of the Klamath Mountains is at a record high, and at risk of serious wildfires.

Reference: Proceedings of the National Academy of Science paper

A key policy of US President Joe Biden’s administration, the Justice40 initiative, pledges that 40% of the government’s investments in climate and clean energy will go to disadvantaged communities. These could include poor neighbourhoods near polluting industrial facilities, for example. It now falls to US researchers, activists and policymakers to work out the details of what ‘environmental justice’ really looks like. They have been developing a range of scientific tools, from maps and models to air-pollution sensors, to assess the cumulative burden of environmental and social injustices. All eyes are on New Jersey, which has led the way by enacting the most powerful environmental-justice statute in the United States.

Covering 10% of the world’s reservoirs with ‘floatovoltaics’ would install capacity equivalent to all electricity-generating fossil-fuel plants in operation worldwide. Floating solar panels have benefits: the water’s cooling effect makes them more efficient than land-based ones. They don’t interfere with desert ecosystems. They keep precious water from evaporating. And putting panels over existing hydropower reservoirs can help them do double duty as water- and sun-powered energy sources. But the possible environmental and social downsides “remain largely unexplored in both concept and practice”, note ten energy researchers and analysts. Even though reservoirs are artificial ecosystems, they provide habitats for wildlife and have an important role in fisheries and recreation.

A small but lively movement is growing to encourage scientists to challenge weight bias. Researchers can make the workplace more welcoming by discouraging comments about other people’s food choices or bodies and by providing personal protective equipment and field clothing in a full range of sizes. Opposing the bias that waist size is related to intelligence, skills or personality traits is also key. “It’s not thoughtful or kind to suggest that you can tell from someone’s body composition what they know,” says cyberpsychologist Kate Tyrol.

“The time is ripe for South Korea to reconsider its strategies for advancing its basic science,” writes So Young Kim, a political scientist specializing in science policy. The country’s support and assessment structure rewards regular output, not unpredictable exploration. But “it is not only funding that matters, but fun — the joy of discovery”, says Kim. Scientists need long periods of stable funding and space to attempt high-risk, high-reward research, she argues.

As a child, science communicator Lalah Rukh was so inspired by an article about personalized medicine in a children’s magazine that she pasted it by her bedside. Now her organization, Science Fuse, takes free scientific demonstrations to the poorest communities and creates posters that smash sexist stereotypes. “We want young girls and boys in Pakistan to grow up reading stories of incredible female scientists who changed the world with their hard work, wisdom and grit,” she says.