How academic institutions can help to close Wikipedia’s gender gap 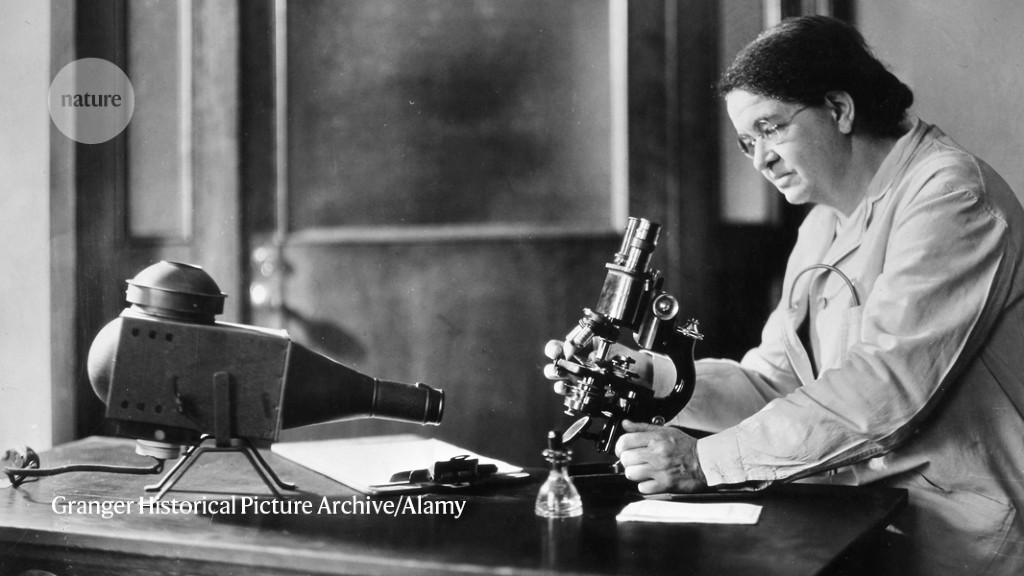 With more than 250 million views each day, Wikipedia is an invaluable educational resource.

However, of English-language Wikipedia’s 1.5 million biographies, only around 19% are about women. The gender bias of the online encyclopedia — along with other geographical, racial and societal biases — reflects the biases of its community of editors, as well as systemic inequities in the broader world.

Since 2018, 500 Women Scientists, a grass-roots advocacy organization of which we are all members, has run more than 30 Wikipedia edit-a-thon sessions — workshops in which Wikipedia experts and novices come together for a guided crash course on the website and a few hours of focused editing. Over biscuits and coffee, we’ve built a community of contributors who are committed to tackling inequalities in the online encyclopedia. We have sponsored in-depth editor training with Wiki Education — a non-profit organization that builds partnerships between academia and the Wikimedia Foundation, which funds Wikipedia and its sibling projects — to address this under-representation.

Our focus has been to improve, create and translate Wikipedia biographies for women and people from gender minorities in science, technology, engineering, mathematics and medicine (STEMM) fields. We’ve partnered with various institutions and organizations to focus on specific communities, such as Black STEMM leaders as well as STEMM professionals with disabilities and those in the LGBTQ+ community. In the past four years, we’ve created and edited more than 3,000 pages, which have been viewed more than 80 million times: 80 million opportunities to share diverse stories of those working in STEMM, and to slowly change the face of science.

Of course, edit-a-thons alone won’t single-handedly solve inequities on Wikipedia or in STEMM. Historically, women and members of marginalized groups have been excluded from science or robbed of recognition, as happened with chemist Rosalind Franklin’s contribution to the discovery of the structure of DNA, and chemist Alice Ball’s development of the Ball method to treat leprosy. But what we can do is correct the mistakes we know of and ensure that scientists working today get the credit they deserve.

As we’ve guided nearly 800 editors through their first edits during edit-a-thons, we’ve encountered a number of recurring challenges. Below, we’ve outlined four of these challenges, and what institutions can do to help to change things for the better.

Challenge: Meeting Wikipedia’s notability criteria for scientists and academics. Because Wikipedia is a general-interest encyclopedia, there are certain requirements — the notability criteria — that must be met for a page to be created. For scientists and academics to be considered ‘notable’, they must be recognized in their community through prizes and awards, leadership positions and research contributions. But women and LGBTQ+ individuals face a number of institutional and systemic barriers that affect their experience and advancement in STEMM fields, and they are less likely to win major research awards or to be seen, heard or read about in the media. These disparities are compounded for people of colour, who must navigate a hostile obstacle course as academics.

Solution: Use public-relations departments at institutions to elevate and broadly feature the achievements of women and people from gender minorities in STEMM. Recognizing the achievements of scientists from historically excluded groups not only aids their career advancement, but also contributes to meeting the notability criteria. Institutions and professional societies can use their public-relations operations to make it easier for these researchers and faculty members to be found by the media — and by Wikipedia editors. For example, institutions can create dedicated (and up-to-date) pages for faculty and staff and encourage experts to sign up for databases — such as Gage, a global platform for women and people from gender minorities in science, set up by 500 Women Scientists and designed to be used by media organizations. Journalists can help by quoting more women and people from gender minorities, profiling leaders in these groups and discussing the scientists, not just their science, in the stories they write.

Challenge: Finding freely licensed photos for scientists. Only 35.4% of biographies on English Wikipedia have images. A 2022 study of reader interactions with Wikipedia images1 found that biographies with photos are easier to read and understand, and receive more traffic, than those without photos. In 2005, Besiki Stvilia, now a specialist in library and information science at Florida State University in Tallahassee, and colleagues2 reported that pages selected by Wikipedia’s most powerful editors as ‘featured’ articles — the most highly trusted pages on the site, which are showcased on the front page — include a median of five images. Ultimately, diverse representations of who does science have the power to alter stereotypes of who belongs in science and what a scientist looks like. Wikipedia can amplify this impact because images shared to Wikimedia Commons, its repository of images and other media, are free to use and reuse.

#VisibleWikiWomen, a campaign launched five years ago to battle bias against women across Wikipedia, estimates that less than 20% of the encyclopedia’s articles about women have pictures. Although one of the most commonly asked questions in our edit-a-thons is how editors can add photos to improve this gap, it is often very challenging to find photos for scientists with a licence that is appropriate for Wikimedia Commons uploads.

Solution: Upload more images of scientists with appropriate licences. Institutions and professional bodies can upload images featuring their researchers and faculty members with their consent and with an appropriate Creative Commons licence so that the pictures can be used on Wikipedia. This can be done by either uploading images to Wikimedia Commons using the Upload Wizard, or uploading images to a repository, such as Flickr, with an appropriate licence.

Challenge: There are higher rates of deletion for biographies about women and members of the LGBTQ+ community. Wikipedia has guidelines around notability, but decisions about which biographies are notable are ultimately left to the Wikipedia editing community. A 2021 ethnographic study3 demonstrated that biographies of women and members of the LGBTQ+ community who meet Wikipedia’s notability criteria are more frequently nominated for deletion than are men’s biographies. Take Nobel laureate Donna Strickland, a physicist at the University of Waterloo in Canada: pre-Nobel, her Wikipedia entry had been tagged for ‘speedy deletion’, and was subsequently deleted, within six minutes of going live. This points not only to gender bias in the Wikipedia editing community, but society’s bias towards the achievements of some groups over those of others. Page deletions are demoralizing for the editors who worked on them — who might become less motivated to continue editing Wikipedia.

Solution: Increase support for edit-a-thons centeed on advancing equity and justice, and build a community of support. Because Wikipedia mirrors society’s biases, we must create entry points for those who are committed to equity and justice to contribute to Wikipedia. Hosting edit-a-thons is an opportunity to celebrate the stories of scientists who might otherwise be overlooked, and to bring editors into the Wikipedia community with the hope that once they make their first edits, they will remain engaged in advancing Wikipedia’s ambition “to represent the full, rich diversity of all humanity”. Here, institutions can support ongoing efforts led by local Wikipedia editors or organizations, such as ours, to close the gender gap on the website. This can include hosting a Wikipedia edit-a-thon or providing financial support to groups who host such activities, which can include covering costs of food, child care and accessibility.

Challenge: It will take many editors to achieve change. In 2018, only 17.7% of Wikipedia biographies written in English were about women — four years later, the number has increased to 19.2%. This is essential progress, but incremental. We need more editors to collectively chip away at Wikipedia’s gender, racial, geographical and societal bases.

Solution: Make contributing to Wikipedia part of your class, course or programme, as well as goal of your broader institution or organization. Emphasize how important Wikipedia-editing skills are for professional development: exercising these skills is an opportunity to assimilate and communicate complex information from multiple sources, contextualize scientific research, structure a discussion, add citations and references and share expertise with the broader public. Use the page-view statistics to motivate editors to contribute while driving home the impact of their edits to your institution, and build an institutional Wiki-editing community.

You don’t have to look far for examples. Dawn Bazely, an ecologist at York University in Toronto, Canada, incorporated editing Wikipedia biographies as an assignment into her undergraduate plant-ecology course, and Rebecca Barnes, an environmental scientist at Colorado College in Colorado Springs, ensured that all students across her environmental-science courses would work on profiles of women in science related to the class topic. Institutions can hire a Wikipedian-in-residence, or appoint an existing staff member, to add audio, video or image content to Wikimedia Commons. They can even organize events, communities or training opportunities to help students, staff and faculty build the skills they need to successfully contribute to Wikipedia. For example, in 2018, the University of Toronto hired their first Wikipedian-in-residence “to go where [their] community is”: because a lot of the university’s staff members use Wikipedia, it’s important to ensure it’s a solid resource and improve the quality of information that people access.

Fortunately, 500 Women Scientists is not alone in chipping away at the gender gap on Wikipedia. Groups such as Women In Red have been turning ‘redlinks’ (pages that do not exist yet on Wikipedia) into blue ones since 2015. Last year, the Wikimedia Foundation launched Project Rewrite, an initiative that is calling on journalists, academics, thought leaders, individuals and organizations to step up and play a part in closing the gender equity gap. #VanguardSTEM is now expanding the Wikimedia Commons by building a collection of open and freely licensed audio, video and written content about women of colour and non-binary people of colour in science.

But we can accelerate our progress on Wikipedia further and faster if academic institutions are willing to help make change.