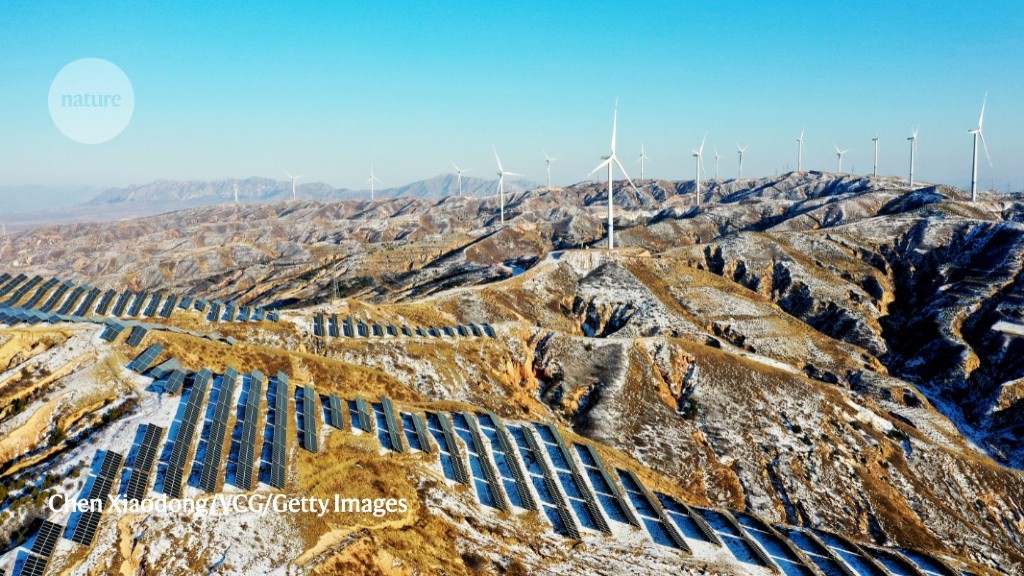 In 2020, China announced an ambitious plan to reduce its carbon emissions — by 2060, 80% of its total energy mix will come from non-fossil-fuel sources. This will be crucial to help minimize future climate warming, because more than one-quarter of the world’s greenhouse-gas emissions are currently generated by China.

“The biggest challenge we face is how to replace traditional energy sources, especially coal, with clean energy sources at scale,” says Xiliang Zhang, director of the Institute of Energy, Environment and Economy at Tsinghua University in Beijing, who advises China’s central government on energy strategies to address climate change. Tsinghua University houses one of the country’s leading energy research institutes, and published more than 1,500 papers in electrical and electronic engineering last year. This is more than any other single institute globally, according to data from Clarivate’s Web of Science.

To achieve such a seismic shift, the country’s government needs to focus on science — and specifically on increased support for research into new energy technologies, says Zhang.

Nature spoke to four research teams hoping to play their part in China’s adoption of cleaner fuels, each focusing on different parts of the country’s vast energy grid.

Pumped hydropower is the most common type of energy storage in use globally, often supporting electricity grids that rely on solar or wind power. It works by pumping water to a storage reservoir at the top of a hill when energy demand is low, and releasing it downhill under pressure to power turbines and move electricity back into the grid when needed. Storage is a key component of green energy systems, enabling the energy generated during especially windy or sunny periods, for example, to be retained and released to meet demand during peak times.

In September 2021, China’s National Energy Administration — the central government’s regulatory body for energy development — announced plans to double its generating capacity from pumped storage hydropower in five years, and to double it again by 2030 to reach 120 gigawatts (GW) of capacity.

The roll-out of more hydropower plants has been slower than predicted, says Baoshan Zhu, a hydraulic engineer at Tsinghua University. Their high cost, long construction time, limited production capacity and the potential environmental damage posed by their construction have all impeded progress.

Despite this, China still leads the world in its number of hydropower stations, and has developed a domestic industry for producing the necessary equipment. Before about 2008, Zhu says, many of the water turbines that generate hydropower, for example, were imported from abroad.

When Zhu was a student in the 1980s, it took 1.3 kilowatt hours (KWh) of stored power to generate 1 KWh of electricity. Now, it takes 1.25 KWh. “The difference might look small, but it’s not when stations are designed to generate billions of kilowatts of power,” he says.

China opened its largest hydropower project yet in December last year. Fengning station in Hebei province, just north of Beijing, is also the world’s largest hydropower storage site, with a total capacity of 3.6 GW. Earlier this year, it helped to guarantee a renewable power supply to the Beijing 2022 Winter Olympics.

The station uses high-tech, variable-speed turbine pumps that are better at regulating their own energy efficiency than are conventional, single-speed ones, but have had to be imported from Austria. That’s a challenge, Zhu says, for efforts to develop the technology further in China.

As demand for wind and solar power increases, so systems for accurately forecasting their availability are becoming more important to power companies in China, says Fei Wang, a researcher in electrical engineering at North China Electric Power University in Beijing, an institute that fosters talent in research related to energy production.

Wang works at China’s first ‘state key laboratory’ for renewable energy power systems, meaning it is of national strategic importance. Since 2011, when his research group was established, he has seen interest and funding for his field from government and businesses grow significantly. His own group has grown from 6 people to around 50 researchers, and he says his funding has increased by roughly fivefold.

Wang’s research focuses on increasing the accuracy with which power suppliers can predict solar and wind energy levels in the short term, typically between 24 hours and 72 hours ahead. This is necessary, because these sources are particularly affected by fast-changing weather conditions. The team uses a range of information to build its prediction models, including images of clouds taken by satellite and from the ground, historical weather data and algorithmic tools.

In September 2021, the team proposed a new model for predicting the extent of solar power in the ultra short term, over periods between 15 minutes and 4 hours ahead (F. Wang et al. Energy 238, 121946; 2022). They do so by correlating patterns of cloud clusters with the amount of solar energy received by photovoltaic panels — a measurement called irradiance.

Conventional forecasting models, says Wang, use ground-based irradiance sensors to predict levels of solar energy. But cloud cover changes quickly, so by the time sensors detect changes in irradiance, the cloud might have already covered the Sun. To overcome this, Wang’s model tracks the motion of cloud clusters and predicts how they will morph when they arrive above a particular solar farm.

“It’s not easy work,” he says. “It requires multidisciplinary collaborations. To build such models, we need people who understand atmospheric physics, mathematics and deep-learning techniques.”

Since 2018, Wang’s models have been used to forecast future power supplies at solar and wind farms in more than 20 provinces across China, including the large, windy northwestern province of Xinjiang. These forecasts also help to predict how much coal power regions need, in addition to renewable sources, to meet demand. Wang’s more accurate prediction model has reduced levels of renewable energy waste in Xinjiang, for instance, from 4.6% in 2020 to 1.4% in 2021.

China’s 9.6 million square kilometres of varied terrain means the team can’t develop one model that will work for every part of the country, particularly when it comes to predicting wind energy. For example, the researchers use a different model for wind farms in valleys than for farms in the country’s flat northwestern regions, or those in low-lying coastal areas. “In smaller countries, fewer models would be able to cover all farms,” says Wang.

Storing green energy — and predicting when it might arrive — are both key research areas to help China reach its carbon-neutral goals. But further innovation is needed into how energy is generated.

In October 2021, Xiangyuan Zheng, an ocean-engineering researcher at Tsinghua University, won a patent for a fish-farming cage that is powered entirely by wind and solar sources.

As yet untested in the sea, the device, which is about the size of a soccer field, is designed to float offshore, where water depths range from 100 metres to 200 metres. It captures wind and solar energy through turbines and panels that sit on top of the device. Under the water are electrically powered nets that confine the fish and use electrical sensors to monitor their progress as they breed and grow.

Zheng says the power generated on top of the cage could easily meet the needs of these deep-sea aquaculture nets. There is also an opportunity for surplus power to be delivered to China’s coastal cities, where more than half of the country’s population lives and works, he adds.

It’s the kind of forward-thinking, renewable-energy research idea that attracts funding in China, says Zheng. His group of 12 researchers has received 1 million yuan (US$158,000) from the National Natural Science Foundation of China, as well as 8.5 million yuan from various other grants, since 2018.

Zheng’s team now needs large companies or wealthy investors to subscribe to the idea and finance manufacturing, as well as further funds and political support from national and local governments, to turn the idea into practice.

Zheng’s design is the first in China to combine wind and solar power with aquaculture, he says. As such, there are no previous versions his team can study to better understand how the system would work in the real world.

Without such experiments, however, Zheng concedes his team cannot predict how the structure will respond to waves and wind — for example, whether it will tip over, or whether the electric turbine will break down. The smallest version of the project appropriate for such an experiment — one-quarter of the size of his original proposition — would cost around 167 million yuan, he says.

China installed half of all new global offshore wind farms during 2020, and last year, it overtook the United Kingdom as the world’s largest operator of offshore wind capacity. Chinese wind farms made up 8 of the 11 largest new offshore projects listed by the consultancy Windpower Intelligence in November 2021.

Despite these numbers, it’s not easy to commercialize new ideas, says Zheng. “The number of big private companies in marine renewable energies is very small and quite conservative in nature. These companies don’t dare to put a huge investment on a brand new marine structure like ours,” he says.

Considering the abundance of marine research talent in China, this seems a mismatch. According to the United Nations cultural organization UNESCO, China employs 38,000 scientists and technicians in the field of marine sciences — more than any other country.

“For my university alone, there are many, many good patents, but unfortunately only a small portion — around 11% — of them are supported by industry. This is a waste,” says Zheng.

In August 2021, researchers at the Institute of Engineering Thermophysics, part of the Chinese Academy of Sciences (CAS) in Beijing, turned compressed air that had been cooled and stored in underground salt mines into electricity. A month after the demonstration in Feicheng in Shandong province, eastern China, the power station was officially connected to the country’s national grid — making China only the third country in the world to produce grid electricity in this way.

That moment was the result of 17 years of work, says lead CAS researcher Haisheng Chen, who is also the chair of the China Energy Storage Alliance, a non-profit industry association that works to promote energy-storage technology in China.

Chen’s team has worked on an advanced CAES system that resolves three key problems with the technology. First, the process of compressing and decompressing air results in energy being lost in the form of heat, says Chen. This makes the process less efficient than for other storage systems, such as pumped hydropower plants and chemical batteries. Second, the system requires the use of fossil fuels to warm the high-pressure air as it is discharged from a storage cavern; the heat is then used to drive a turbine to generate electricity. Third, CAES facilities are best suited to regions that already have large, underground, highly impermeable storage caverns, such as salt mines.

Chen says his team has made a series of design improvements to reduce overall energy loss and the reliance of CAES on fossil fuels, by considering the three problems together. He says this has enabled the power plant’s efficiency to reach 60% in Feicheng, compared with 42% at the Huntorf plant in Elsfleth, Germany, and 54% at the McIntosh facility in Alabama.

Construction of the Feicheng facility took 12 months and cost 80 million yuan, of which 30 million came from a wide range of national, provincial and municipal government energy departments. The rest came from private and publicly owned businesses, including the company Beijing Energy Storage Technology, which was set up to specialize in the commercialization of CAES technology.

Having this large base of financial support, says Chen, guaranteed that the project would not falter during the construction process. But despite technological progress, Chen says, this type of energy storage technology is still in the early stage.