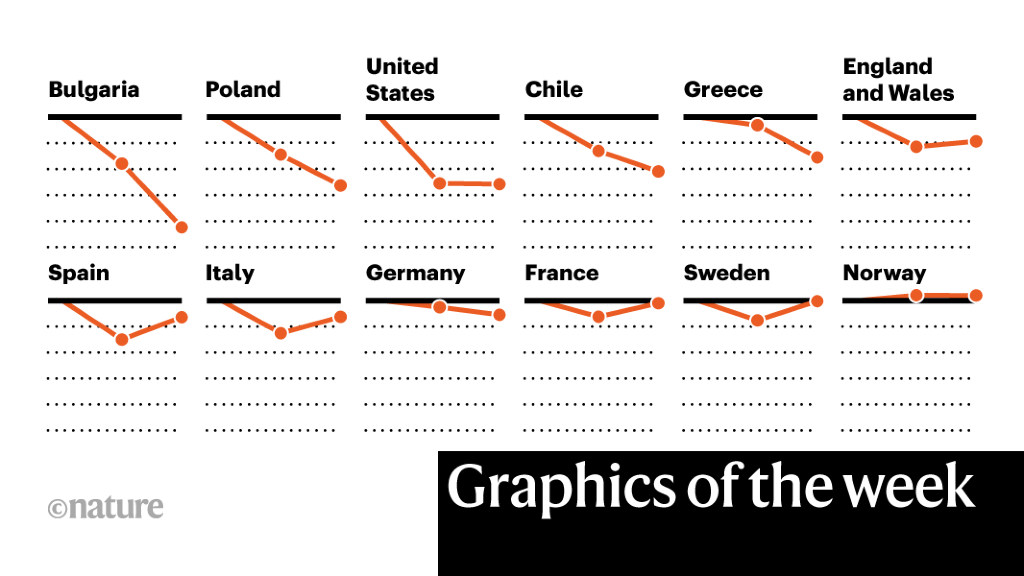 Women are more likely to win awards that are not named after men, a new analysis shows. The study reviewed almost 9,000 recipients of awards in the fields of Earth and environmental sciences and cardiology, as well as those given out by national scientific bodies in the United Kingdom and the United States. It found that, going back to the eighteenth century, women have received only around 15% of these awards, as the chart below shows. For the 214 awards that are named after men, the proportion of female winners fell to just 12%. But women were the winners 24% of the time for the 93 awards not named after anyone — a trend that was consistent over time, say the authors. Unconscious bias might influence award-committee members to select winners who resemble the role model the prize is named after, as our news story explains.

This chart shows how COVID-19 mortality rates have altered average life expectancy, in months, in various countries worldwide. The figures show that the United States lost more than two years of average life expectancy compared with 2019 — worse than many comparably rich nations. Sweden and some other countries have recovered the life-expectancy losses caused by the pandemic. The chart is one of many in this feature, which explains how scientists corrected errors in the World Health Organization’s estimates of how many deaths the pandemic caused.

By releasing five salamanders into a vertical wind tunnel, researchers helped to explain how these creatures survive when falling from the world’s tallest trees.

Animals use a range of strategies to harness aerodynamic forces to support their weight. A cat falling from a moderate height can right itself in the air to land on its feet. The cat does not reach its maximum (terminal) velocity, and the force providing partial weight support is mainly drag acting upwards — as shown below (a).

Writing in Current Biology, the researchers reported dropping wandering salamanders (Aneides vagrans), which can jump from the branches of redwood trees, into a custom-built wind tunnel. As well as being able to right themselves, these creatures adopted a skydiving posture that generated drag and lift and enabled them to control their fall, actively steer with their limbs and tail, and achieve an angle of descent of about 5° from the vertical (b). Salamanders rely predominantly on high drag to slow their descent. (Videos in the paper show the salamanders in flight.) By contrast, when a Pacific parrotlet (Forpus coelestis) takes off, lift and drag contribute equally to support its weight, because drag counterbalances the downward wing stroke (c). Once a bird has taken off by beating its wings, lift, rather than drag, is the main mechanism of weight support.