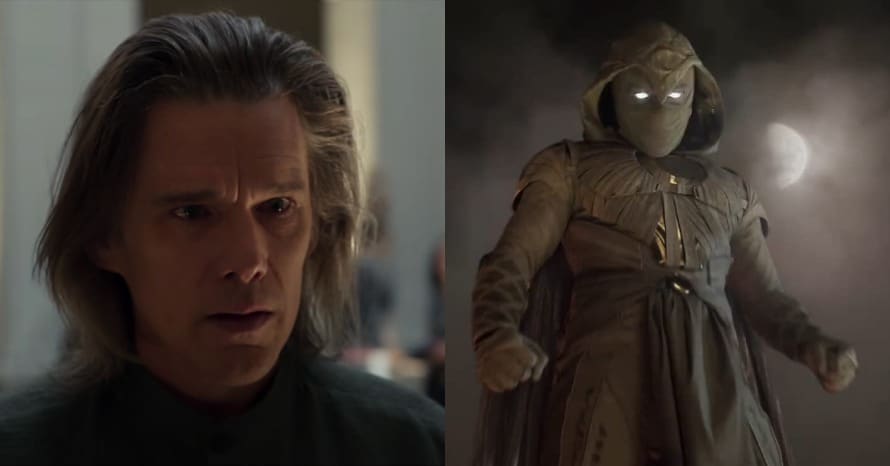 Marvel Studios’ newest series Moon Knight brings in both Oscar Isaac and Ethan Hawke as the titular superhero and primary antagonist respectively. Both actors are amongst the most acclaimed performers of their generation, and their presence within the MCU franchise brings a sense of gravitas that stands out among many other entries both on film and TV.

In particular, Moon Knight explores perhaps the most psychologically complex protagonist in the MCU thus far. Steven Grant, a man with dissociative identity disorder, also shares a body with Marc Spector, and throughout the first four episodes of the series, is shown to struggle with his perception of reality. This unique protagonist is one of the qualities of the series that really impressed Ethan Hawke.

Ethan Hawke appeared in a press conference for the series earlier this week, to which he discussed his approach in playing Arthur Harrow, and how he wanted to distinguish himself from Oscar Isaac’s Moon Knight. In particular, Ethan Hawke highlighted the reversal of the mentally-ill villain trope, with the series centered on a mentally-ill hero:

“Well, the history of movies are paved with storytellers using mental illness as a building block for the villain.  I mean, there’s countless stories of mentally ill villains, and we have a mentally ill hero.  And that’s fascinating because we’ve now inverted the whole process.  And so now as the antagonist, I can’t be crazy because the hero’s crazy.  So I have to kind of find a sane lunatic or a sane malevolent force.  And that was an interesting riddle for me to figure out how to be in dynamics with what Oscar was doing.  And Mohamed was really embracing his mental illness as a way to create an unreliable narrator.  And once you’ve broken the prism of reality, everything that the audience is seeing is from a skewed point of view.  And that’s really interesting for the villain because am I even being seen as I am?  And it’s also…I think that was our riddle, and we came up with somebody who was trying to save the world.  And in his mind, he’s Saint Harrow, you know?  I mean, he thinks he’s gonna be part of the great solution.”

Ethan Hawke brings up an interesting point. Far too often, we see the trop of the “mentally-ill villain” in film, TV, and especially superhero stories. As audience’s tastes regarding comic book film and TV shows become more sophisticated, people are growing more interested in protagonist with a full range of complexities. In a way, it makes sense that both Moon Knight and The Batman premiere in the same month, given that both titular characters are dealing with their own psychological battles.

Stay tuned for all the latest news surrounding Moon Knight, as well as Ethan Hawke’s role as Arthur Harrow, and be sure to subscribe to our YouTube channel for more content!