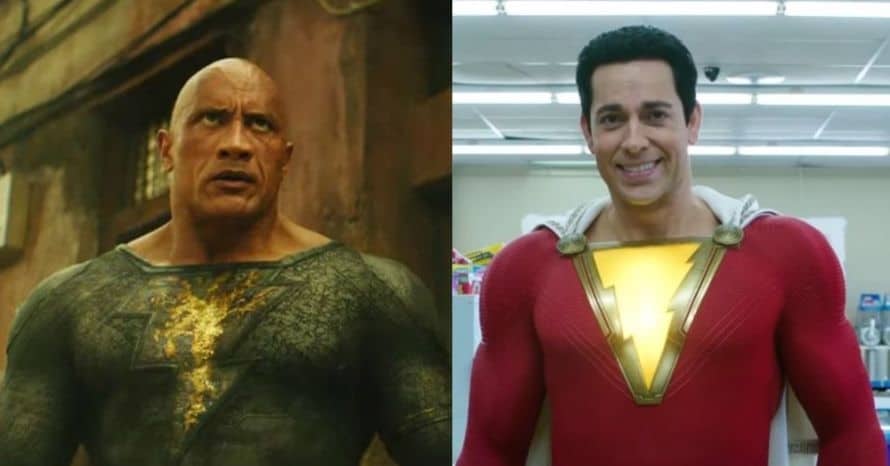 Yesterday, I along with a select group of genre press had the opportunity to attend a special early screening of the first Black Adam trailer at the Steven J. Ross Theater at the Warner Bros. Lot in Burbank, CA. Following the trailer screening, I participated in a special intimate roundtable Q&A with the film’s star/producer Dwayne Johnson, director Jaume Collet-Serra, and producers Hiram Garcia and Beau Flynn.

During the Q&A, the team was asked about the process in introducing Black Adam to mainstream audiences that may not be as familiar with the DC Comics antihero as they are with icons such as Superman, Batman and Wonder Woman. Dwayne Johnson acknowledged that originally, Plans were to introduce both his antihero and Zachary Levi’s Shazam in one film:

“The original plan maybe five or six years ago was to tell the two origin stories of Shazam and Black Adam in the same movie. And that’s what we had worked on, the script was delivered, and when we all read the script, I immediately felt like we had to separate these two movies. We have to honor Shazam, and that origin story and what that is, and what it can be for the fans, and that we also have to tell our story as well, and I think that separating them, with the majority of the world not knowing who Black Adam is, if you weren’t a serious comic book fan, it was important I think to separate them, and that will tell each story separately.”

Producer Beau Flynn reflected on an early morning phone call he received from Dwayne Johnson regarding the decision to separate Black Adam and Shazam into two different origin films:

“He called Hiram [Garcia] and I and he said, ‘Brothers, we’re gonna make Black Adam. We’re gonna tell this story. It’s so big, and so important, and that was it. He was right. We were deep in it, developing that script [with] the both of them. There’s a reason why sometimes in our business, sometimes you have to keep moving forward, but sometimes the business tells you. We weren’t really cracking it. It wasn’t really working, and then that’s when the call came through.”

“It was very freeing, and that’s why he [Dwayne Johnson] is not only the star of the movie, but he is one of the producers with us. As you guys known, if you’ve seen Shazam!, tonally it’s just very different than Black Adam, and to properly make sure you introduce these characters the right way for the fans and for the world, we wanted to make sure we honored the tone. When Dwayne sent us that message, it shook us up. Then, we were like, ‘Oh, this is so much easier, now we saw the patch. Shazam! turned into the great property it is, and that movie turned out great. Tonally, we honor Black Adam, and this is the right way to introduce him to the world where you’ll understand his backstory and everything and we’re honoring his tone spot on, and I think fans will be able to respond to this.”

It is no secret that Black Adam and Shazam! are both part of the ongoing DC Extended Universe, and with the latter’s sequel, titled Fury of the Gods also coming out later this year, it is possible that while that will continue its own story threads, perhaps we will see more hints towards an eventual face-off with the man in black. It’s only a matter of time before Dwayne Johnson and Zachary Levi will finally face off in perhaps the most hyped-up battle in a DC movie since the initial clash between Ben Affleck and Henry Cavill in Batman v Superman: Dawn of Justice.

Here is the synopsis for Black Adam:

“Nearly 5,000 years after he was bestowed with the almighty powers of the ancient gods—and imprisoned just as quickly—Black Adam (Johnson) is freed from his earthly tomb, ready to unleash his unique form of justice on the modern world.”

Black Adam opens in theaters on October 21, 2022. Meanwhile, Shazam! Fury of the Gods is set to open on December 21, 2022. Be sure to continue following Heroic Hollywood for all the latest news on the upcoming films, and subscribe to our YouTube channel for more original video content.