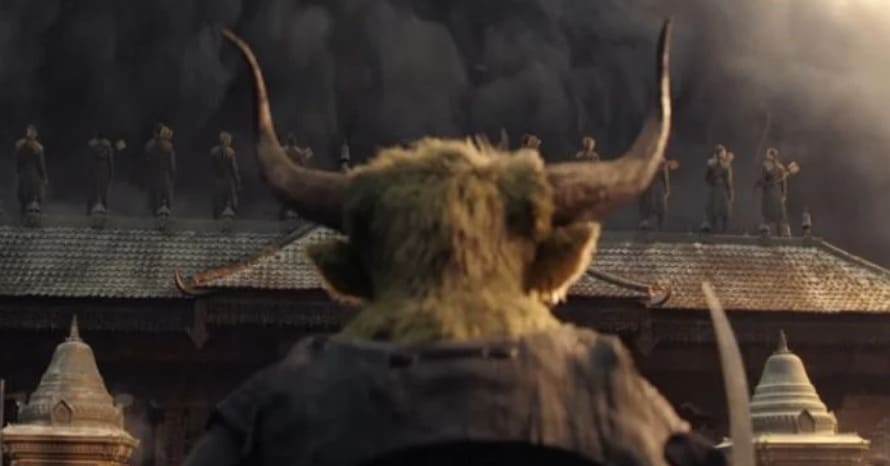 Doctor Strange in the Multiverse of Madness introduced the minotaur Rintrah in a background role, though a set video suggests he originally had a larger part to play.

Rintrah is a green-skinned minotaur from the extradimensional planet R’Vaal in Marvel’s comic continuity, which sees him train as a sorcerer under Doctor Strange. Doctor Strange in the Multiverse of Madness introduced Rintrah, played by Adam Hugill, during the Scarlet Witch’s attack on Kamar-Taj. He was one of the many sorcerers summoned to help defend against Wanda.

Rintrah was a noteworthy addition to the Kamar-Taj scenes as the only sorcerer who was visibly non-human. However, his role was relatively minor and audience members unfamiliar with the comics may have been a little confused by the appearance of a green minotaur in amongst the sorcerers at Kamar-Taj.

A new set video offers a look at the filming of a deleted scene from Doctor Strange in the Multiverse of Madness, involving Rintrah and other sorcerers. The scene involves a small team of sorcerers scaling the side of Mount Wundagore, coming under attack from the Scarlet Witch. As two of the sorcerers are thrown from the mountain by Wanda’s magic, an actor in a motion-capture suit, presumably portraying Rintrah, manages to cling on. Check out the clip below:

Ultimately, Wong and Doctor Strange were the only sorcerers to travel to Wundagore in an attempt to stop Wanda. The inclusion of Rintrah in an earlier version of this scene might suggest the film was at one point going to dive deeper into the character’s story, or at least give him a more developed role in order to lay the foundation for future explorations of his history.