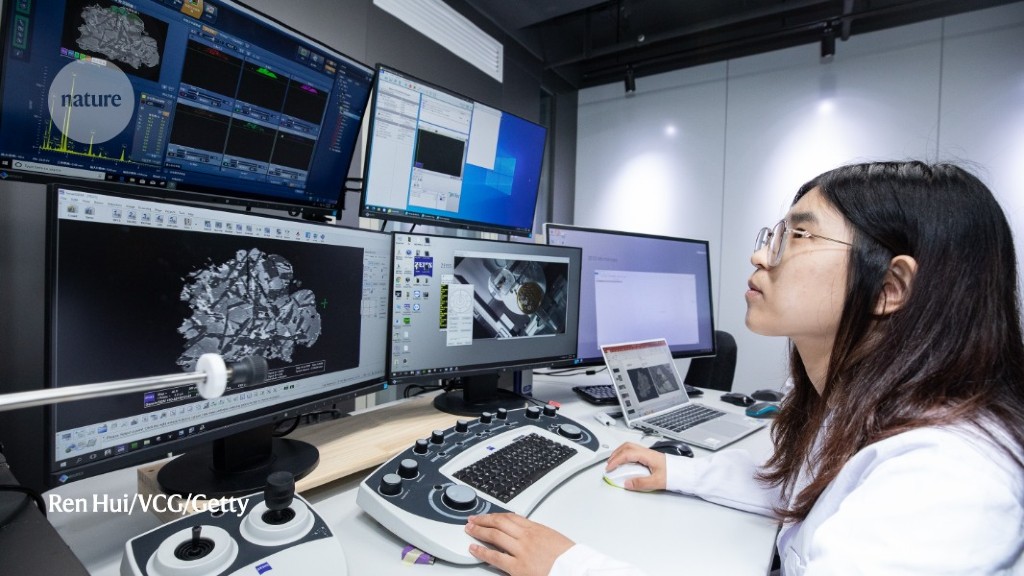 Until recently, geochronologist Li Xian-Hua’s research focused on molten rocks on Earth. But when a Chinese spacecraft delivered the country’s first rocks from the Moon in December 2020, Li pivoted to study them. “I’m a new person working on extra-terrestrial rocks,” says Li, who is based at the Institute of Geology and Geophysics (IGG) at the Chinese Academy of Sciences in Beijing.

Li is one of many planetary scientists in China who have had the chance to study lunar rocks for the first time. The samples, collected by the Chang’e-5 spacecraft, are the first brought back to Earth since NASA’s Apollo and the Soviet Union’s Luna missions more than 40 years ago. They are being examined for insight into the Moon’s evolution.

Those studies are starting to yield exciting results. About half a dozen papers have been published on the Chang’e-5 samples in the past six months. And last week, at the Lunar And Planetary Science Conference in Houston, Texas, a session on China’s lunar missions saw roughly a dozen studies presented.

“There are a lot of young Chinese researchers getting involved,” says Clive Neal, a geoscientist at the University of Notre Dame in Indiana, who has worked on Chang’e-5 samples with collaborators in China. Several postgraduate researchers and students presented work on the lunar samples at the conference in Houston, he says. The rocks are exciting because they “represent a window into a very different era of lunar magmatism” compared with those gathered previously, says Neal.

The Chang’e-5 mission recovered 1.7 kilograms of loose volcanic material called basalt from a vast lava plain, known as Oceanus Procellarum, in the Moon’s northern region. The location was selected partly because it might contain younger volcanic material than the regions visited by the Luna and Apollo missions. The hope was that a younger site would give insight into a time when the Moon had started to cool but was still volcanically active.

Last July, the China National Space Administration released the first specimens to scientists across China. Some 17.5 grams of fine-grained powder and solid rock were distributed for 31 scientific projects selected from 85 applications. Several further rounds of applications to work with lunar samples have followed.

The results confirmed that the Moon was still volcanically active almost a billion years later than the rocks from Apollo suggested this activity peaked. But working out what fuelled this activity has proved tricky.

One leading theory, based on satellite observations, suggested that heat-producing radioactive elements such as potassium and thorium found in the lunar mantle might have driven the volcanism. But when another team at the IGG examined the lunar basalts, they determined that high levels of these elements3 were not the source.

Another possibility was that the mantle contained enough water to reduce the temperature at which materials melt and would make it easier for the magma to erupt. But Lin Yangting, a planetary scientist at the IGG and his colleagues, found that the lunar rocks probably came from a relatively dry source4.

The question of the volcano’s heat source has flummoxed scientists. “I have no answer for this,” says Lin, who previously studied meteorites found on Earth.

“This is a very big science problem,” says Weibiao Hsu, a planetarygeochemist at Purple Mountain Observatory, CAS, in Nanjing, China, because it reveals how much we still have to learn about the Moon’s evolution.

Hsu, who received two chips of basalt, wonders whether a closer look at these basalts might reveal that they actually do come from a rich source of heat-producing elements, because the recently published study by Lin and his colleagues were conducted on soil samples that contain many materials. Hsu has found that the rocks contain high levels of titanium, which suggests they came from deep in the mantle.

“We’re exploring all possibilities,” says Ming Tang, a geochemist at Peking University in Beijing, who received two tiny grains of basaltic rock and will analyse them to better understand the pressure and temperature in which they were created. The samples are a first for Tang, who previously studied magma from volcanoes on Earth. “It’s a good opportunity for me and many other Chinese scientists interested in stretching their field,” says Tang.

For now, theories about the Moon’s heat source abound. But Hsu says there will be a lot of groups trying to solve the mystery and gain other insights about the Moon. He has seen many researchers join the field since the arrival of the Chang’e-5 samples. This year, his laboratory received more applications from students keen to join their graduate programme than they could accommodate. “This has never been the case before.”

Lin expects even more researchers to get involved. Within the next decade, China is planning a sample-return mission to the Moon’s south pole and another to Mars.

“Twenty to thirty years ago, this was just a dream. Now it has come true,” says Li.