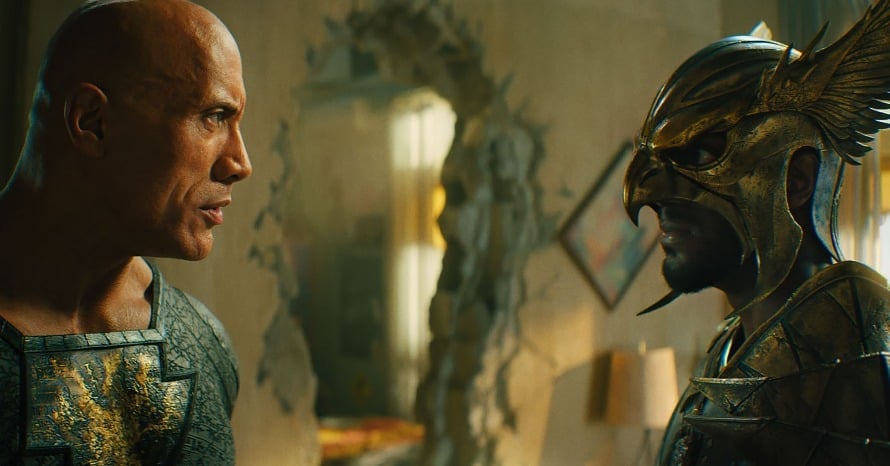 After many years in the making, Warner Bros. Pictures, New Line Cinema, and Dwayne Johnson are finally bringing the origin story of Black Adam to life in his big screen debut. The character, whom Johnson had been attached to portray for quite sometime was originally set to appear in a film alongside Shazam (Zachary Levi), but the plans shifted into introducing him in his own standalone movie to introduce audiences to his origins.

Last week, Heroic Hollywood was given the opportunity to attend the global trailer launch event for Black Adam at the Warner Bros. Lot in Burbank, CA. Following an early screening of the new trailer, we were given the opportunity to participate in an intimate roundtable Q&A with Dwayne Johnson, director Jaume Collet-Serra, and producers Beau Flynn and Hiram Garcia. The event was a chance for Johnson and his team to hype up what the film has in store, including plans for expanding the DC Extended Universe as we know it.

Dwayne Johnson shared a special video from the Black Adam global trailer launch event on his official Instagram, in which he is shown driving a golf cart around the Warner Bros. lot, and taking a look at his action figure from McFarlane Toys’ DC Multiverse collection:

With the introduction of Dwayne Johnson as Black Adam along with some of the new films coming to the DC Extended Universe in the near future, it’s safe to say that the franchise as many viewers have known it is undergoing some massive changes. For a series that has had its ups and downs with critics and some audiences over the years, it sure looks like some exciting new updates are going to give it new life, and it doesn’t hurt to have this generation’s definitive action movie star in the lead role.

Here is the synopsis for the DCEU film, Black Adam:

“Nearly 5,000 years after he was bestowed with the almighty powers of the ancient gods—and imprisoned just as quickly—Black Adam (Johnson) is freed from his earthly tomb, ready to unleash his unique form of justice on the modern world.”

Black Adam opens in theaters on October 21, 2022. Be sure to continue following Heroic Hollywood for all the latest news on the upcoming film, as well as the future of Dwayne Johnson in the DCEU, and subscribe to our YouTube channel for more original video content.