Better get hit in your soul 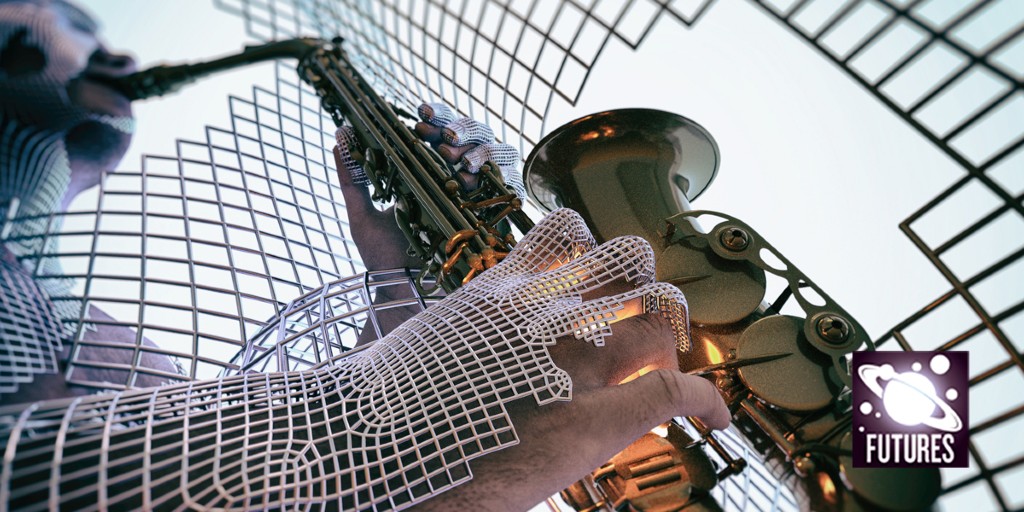 The digidoc tells Charlie to expect some discomfort when he wakes up. “Not really pain, though,” she says. How could she know? She’s fully augmented, that’s obvious from the metallic ring around her iris, her arm laced with wire, connecting digital sensors and calibrators to cerebral receptors. If she experiences any reaction, it’s clearly not debilitating. Unlike Charlie’s. So she doesn’t really know what removal is like.

“Now,” she instructs, “count to ten.” The anaesthetist nods along, as if enjoying some phantom beat. Charlie gets to six before he blinks out.

He was an early adopter, back when augments were new and strange. He was good without them, sure. But he wasn’t great. No matter how much he practised, his sax betrayed him constantly: beeping when he tried to bop, whining when he wanted to weep. The old-timers mocked him, made fun of his weak cheeks. They rejected augmentation out of hand when the technology came on the scene. But the way Charlie saw it, there was no downside to improving proficiency. Why accept limits unless you had to?

Aural receptors gave him perfect pitch and finer sensitivity; augments strengthened his tongue, lips and jaws for better embouchure and tonal technique; digital flexors let his fingers flutter down the keys. Now Charlie could make his saxophone sound however he pleased. And the results, they sang for themselves, didn’t they? At his return show, he played his first solo with such finesse, such powerful ease. In the dim barlight, he saw heads turning, conversations pausing, people listening. Like finally he could speak to them — finally, he could really play.

The old-timers groused about skill that got installed instead of earned, sneered about people who traded soul for fancy fingering, said they wouldn’t share his stage. But only the most stubborn could resist when they saw the gigs he was getting. Besides, soon everyone was getting augmented — Charlie was a pioneer, but no outlier. For thirty years he was a big name: touring on five continents and all the big islands in between, alongside stars old and new, everyone who mattered in the international scene. The old-timers either got augmented or got quiet, kept playing small bars in small cities. Or maybe they died, or maybe he stopped listening. Anyway, he hadn’t traded his soul; he just played what he felt more perfectly. What was wrong with that?

At first, the tinnitus was a minor irritation; soon it came with mild headaches. But gradually the high-pitched hum crested to a feedback shriek, and pain shot through his orbitofrontal cortex like lightning. His face felt numb, his lips fat like he’d taken a punch. His hands began to shake. He started hitting wrong notes, dropping things.

He rebooted and rebooted, upgraded every component, but the digidoc’s prognosis was cagey. Sometimes, the doc said, and clearly this was true in Charlie’s case, the problem wasn’t degrading tech, but calcified connections in the brain. If the cause of irritation wasn’t removed, symptoms could progress to seizures, even strokes and debilitating pain.

Charlie resisted, haunted by his twisted old memories: those early years of odd blats, wobbly vibrato and long hours of fumbling. He didn’t want to give up his augments — no, he wanted to play.

Except now he couldn’t, that was the problem. He cancelled a tour, lay at home in the dark and took drugs to make the whining drill inside his skull go away. Friends visited and called at first, then receded to occasional cards and text messages. His saxophones gleamed at him, but he didn’t take any out of the case. He couldn’t screw the parts together, couldn’t press his lips to a reed. Some days, he could barely speak. Where was his soul then, he wondered — stifled inside him, calling and calling, without any way to sing.

Finally he gave in, made the appointment. It’s a bunch of minor surgeries that add up to something major: taking it all out, getting it all over with.

He wakes up to a hospital room full of flowers, so many that they block the window and weight the air with the scent of lilies. Beneath the flowers, on the visitor’s chair, sits a beaten-up, faded leather case.

Charlie sits up, still groggy. The doctor was right — his hands and face feel stiff and sore, but the headache is gone, and there’s no real pain. His motion alerts a nurse, who comes to check on him and warn him about the catheter. “Some people try to pull it out,” she says, “and all those tubes have to stay in place.”

Alone again, he flexes his hands, holds them out to see: he can feel the inflamed lines where the wires were, but his fingers are steady. He flattens his lips, then pops a little air kiss: his mouth feels tired, but at least he feels it. His mind moves slowly, picking through his sensations and thoughts, checking the bare connections between ears, lips, fingers, brain.

Charlie reaches out and pulls the chair near, taking care not to snag any tubes or disturb anything. Now he can lean over and open the case. He has multiple instruments, of course, some from more famous makers that command a higher price. But this one’s his favourite: his old nemesis, the first one he bought with money he’d earned playing music. With his own awkward hands he assembles the saxophone; he wets the reed in his mouth, then fastens it in place. And even before he fumbles the first weak note, he knows: he’s still got soul, this old-timer does, and however imperfectly his sax sings from now on, he will always be grateful to play.

Lia Swope Mitchell reveals the inspiration behind Better get hit in your soul.

This piece came to me on a nice summer day in 2021, when I decided to take some time away from all my gadgets. Like a lot of people, I’ve become a little too tethered to my computer during the pandemic, and sometimes I need a break from the digital world. So I took a notebook to the park and sat down at a picnic table to write by hand.

Writing offline, on paper, means I can’t do any quick research and I can’t edit. If I mess up my facts or misspell something, nothing will show me my errors, much less fix them for me. Without the augmentation computers provide, all I’ve got is what’s already inside my mind. In some respects it’s more difficult to work with those natural limitations, but I also like knowing I don’t need all that extra stuff to create something, and I enjoy doing it.

Generally speaking, I don’t set out to write stories that closely reflect my own experience, but more often than not they reflect it anyway. In this case, I was seeing what I could do without the assistance that technology usually provides — much as Charlie does at the end of this story.

Of course, I did some editing later when I typed the story, and some research, too. That research lead me to the title, which I’ve adapted from a song title by the great jazz composer Charles Mingus.