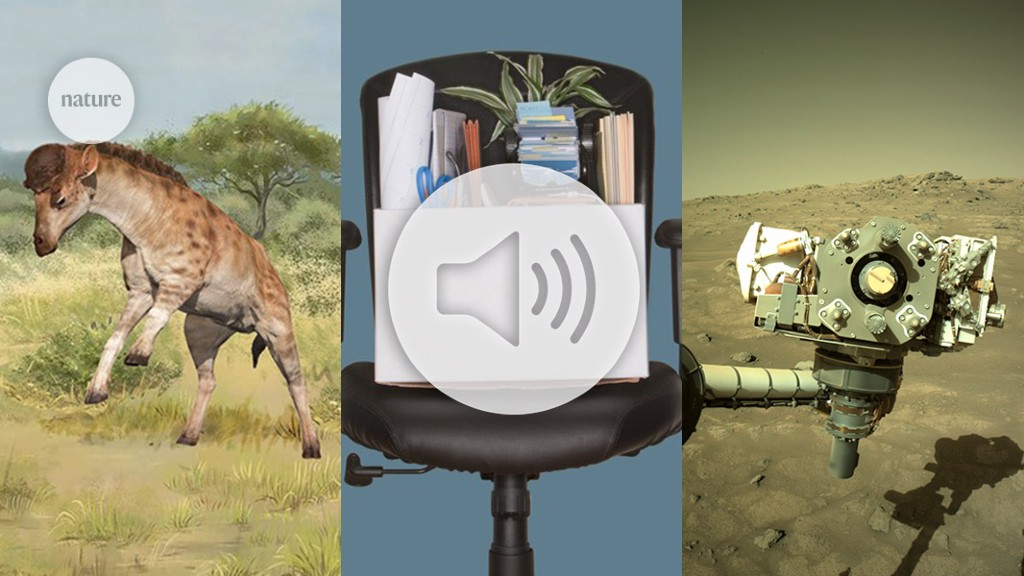 Listen to the latest from the world of science, with Benjamin Thompson, Nick Petrić Howe and Shamini Bundell.

How the giraffe got its long neck is a longstanding question in science. One possibility is that giraffes evolved longer necks for sexual competition, with males engaging in violent neck-swinging fights. Now, a team have described fossils of an ancient giraffoid species with a thick headpiece adapted for fighting, which could add weight to this hypothesis.

Nature News: How the giraffe got its neck: ‘unicorn’ fossil could shed light on puzzle

05:18 A wave of resignations signals discontent in academia

Around the world, the ‘great resignation’ has seen huge numbers of workers re-evaluating their careers and lifestyles and choosing to leave their jobs following the pandemic. Academia is no exception, with many scientists deciding to leave the sector in the face of increased workloads, systemic biases and pressure to publish.

10:34 An emergency fix gets MAVEN back on track

Earlier this year, NASA’s MAVEN spacecraft, which has been orbiting Mars since 2014, developed some serious equipment issues that prevented it from keeping its correct orientation in space. In a race against time, a team on Earth fixed the problem by developing a system that allowed the spacecraft to navigate by the stars.

NASA’s Perseverance rover has arrived at an ancient Martian river delta where it will spend the next few months exploring, while scientists assess where to drill and extract rock samples. It’s thought that rocks from this region have the best chance of containing evidence of Martian life, and plans are being developed to return them to Earth in the future.