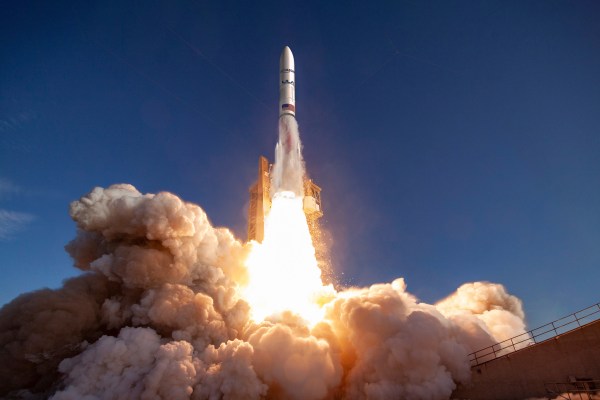 Amazon is finally taking decisive action on its Kuiper communications satellite constellation, securing the rights to as many as 83 launches from United Launch Alliance, Arianespace, and of course Blue Origin. Interestingly, none of the launch vehicles set to be used have flown before — but there’s plenty of time to change that as Amazon’s 3,236-strong constellation takes shape.

Announced during the Space Symposium conference in Colorado Springs, the contracts have no fixed value associated with them, and an Amazon representative declined to provide any kind of ballpark. The company said that it has secured, or perhaps pre-ordered, 18 Ariane 6 vehicles (the company’s largest contract ever), 12 New Glenns from Blue Origin, and 38 Vulcan Centaurs from ULA. There is an option to purchase additional New Glenns, and an existing contract for 9 Atlas Vs from ULA.

A back-of-napkin calculation puts the lower bound of the value of this new deal at around $10 billion, though of course this is only one part of a much larger operation (and depends heavily on launch costs, which are continually in flux). The estimate simply shows that Amazon is ready to make commitments at the 11-digit scale to get things moving.

“Securing launch capacity from multiple providers has been a key part of our strategy from day one,” said Kuiper VP of technology Rajeev Badyal in the Amazon press release. And indeed, they have said as much for some time. “This approach reduces risk associated with launch vehicle stand-downs and supports competitive long-term pricing for Amazon, producing cost savings that we can pass on to our customers. These large, heavy-lift rockets also mean we can deploy more of our constellation with fewer launches, helping simplify our launch and deployment schedule.”

Amazon declined to provide any timing or logistical details, but a press event is scheduled for later this morning at Space Symposium. I will update this story with more information if anything substantial is provided on the record.

A notable absence from the list of launch providers is SpaceX, a natural enough omission given the intense yet largely unacknowledged rivalry between it and the Bezos-backed Blue Origin. SpaceX launched its Starlink satellites on its own Falcon 9 rockets, and Kuiper and its partners seem eager to show that there are cost-effective alternatives out there.

The fact that not one of these launch vehicles has taken a payload to orbit doesn’t seem to have given Amazon much pause. The Ariane 6 is perhaps the closest to launch readiness and is set to fly this year. The Vulcan Centaur may be close behind, but it’s relying on the BE-4 engines from Blue Origin, which have yet to materialize. It’s hard to say when New Glenn will be ready, as Blue Origin has been rather quiet about its development and testing. Amazon did note that it has contracted the Swiss company Beyond Gravity to build the satellite dispensers that will ultimately send Kuiper hardware on its way.

The next immediate milestone for the project won’t be a full-scale launch, however, but a small-scale test of prototype satellites to verify the work they’ve been doing on the surface and in simulators. Those will go up late in 2022 aboard ABL Space Systems RS1 rockets.

After that, it’s likely that the Atlas Vs will be used first to put the first few batches into orbit and do a bit of a shake out of the deployment and activation process with production satellites. Then the cadence can increase as other launch providers get to flight proven status and come on board.