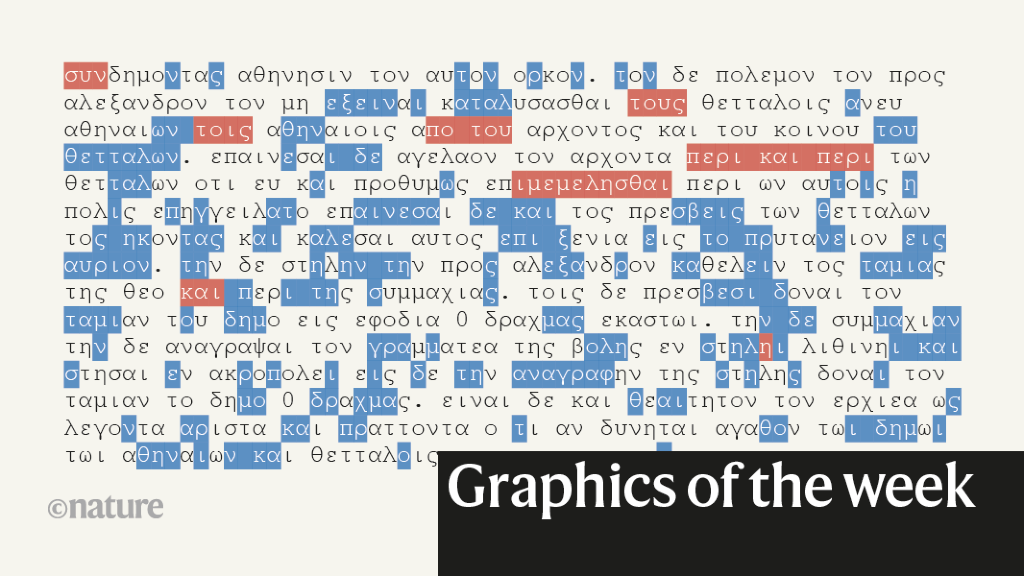 This graphic represents the advance of artificial intelligence (AI) into classical studies. Researchers this week revealed an AI called Ithaca that is able to predict missing text in ancient Greek inscriptions.

Scholars who transcribe a fragmented inscription would note gaps where letters are missing — shown by the highlighted dashes in (a). Ithaca is trained to suggest text that might fill these sorts of gaps (b). The text proposed by Ithaca matches the suggestions previously made by academics (text highlighted in blue), with a few exceptions, highlighted in red. Our News & Views article explains more about how scholars of the classical world have been adopting digital tools.

A new analysis1 shows that the number of people who died because of the COVID-19 pandemic could be roughly three times higher than official figures suggest. The study, by researchers at the Institute for Health Metrics and Evaluation (IHME) in Seattle, Washington, finds that the true number of lives lost to the pandemic by 31 December 2021 was close to 18 million. That far outstrips the 5.9 million deaths reported to various official sources for the same period.

The difference is down to significant undercounts in official statistics, owing to delayed and incomplete reporting and a lack of data in dozens of countries, as our news story explains. The IHME’s central estimate of deaths is similar to that of The Economist magazine in London.

Unlike in the Arctic, where sea ice has declined rapidly over that time, Antarctic sea ice has seen a lot of year-to-year variability, as this jagged line graph shows. The minimum extent of 1.92 million square kilometres occurred on 25 February. But although global warming could play a part, much of the decline can be ascribed to natural variability. The record low was partly due to strong winds pushing ice out of the Ross Sea, a bay off the coast of Antarctica, to areas further north, where it is warmer.